KPMG report: Dr. Barker knew Rothberg was Rootenberg before she hired him

Barker apologized Friday to her Algoma Public Health colleagues, but insisted half the statements attributed to her in KPMG's report are inaccurate
Jan 31, 2020 8:44 PM By: David Helwig 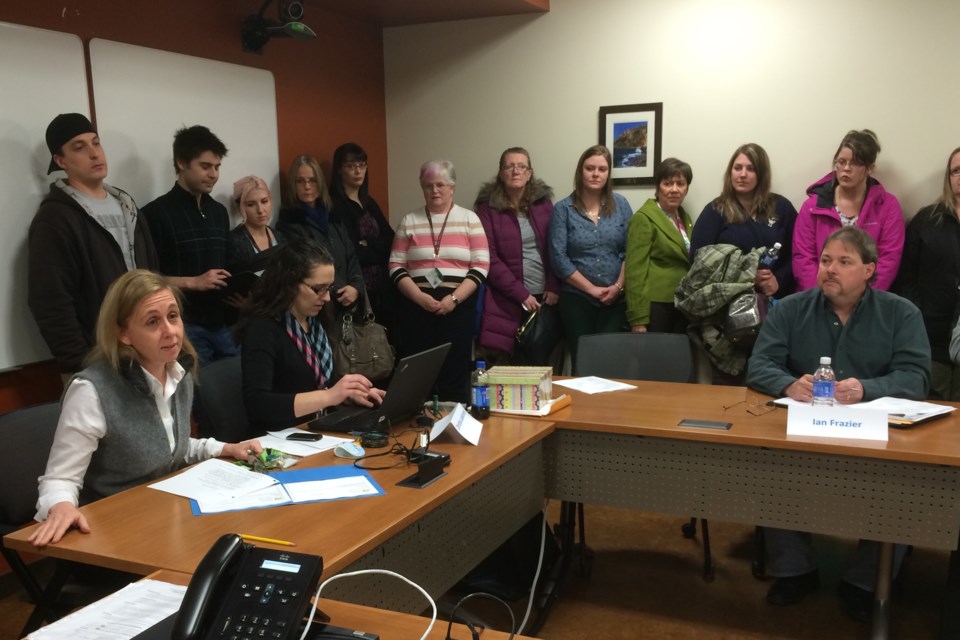 Dr. Kim Barker (left) is shown minutes before her resignation at a packed Algoma Public Health board meeting on Jan. 21, 2015

Rootenberg had previously done time at Beaver Creek Institution in Gravenhurst for multiple counts of fraud involving more than $2 million.

A search of APH records by KPMG found that Barker and Rootenberg had been communicating with each other by email since July 29, 2013, about four months before he was hired.

In one communication sent on Oct. 8, Barker had referred to Rothberg as Rootenberg.

Rootenberg refused to co-operate fully with the forensic audit and KPMG commented that this limited its ability to get his side of the story.

The KPMG investigators found no payments to Rhulse 26 that seemed have personally benefited Rootenberg.

After further details were exposed, Barker submitted her resignation, forensic audits were ordered by both APH and the provincial government, and four members of the APH board including Ward 4 Coun. Marchy Bruni were asked by Ontario's health minister to resign.

After Algoma Public Health, Mayor Christian Provenzano, former MPP David Orazietti and former Minister of Health Dr. Eric Hoskins all called for the secret report to be made public, SooToday made a freedom-of-information request in May 2015.

Our application was ultimately successful, but through a succession of legal appeals, Dr. Barker fought for four years to keep the document from becoming public, arguing that it contained deeply personal information that she provided to KPMG on the understanding it would never be made public.

An unredacted copy of the full 26-page report was turned over to SooToday at 4:52 p.m. Thursday.

On Friday, Barker issued an apology to her former colleagues at Algoma Public Health but insisted the KPMG report was riddled with inaccuracies.

"My attempt to keep certain elements of the KPMG report private began after my concerns about its inaccuracies and misrepresentations went unaddressed," she said in a written statement.

"I felt it would not serve the public interest to have unreliable information on the public record. While my decision to hire the interim chief financial officer at Algoma Public Health was clearly misguided, my overriding objective was always to find an expedient short-term solution to the health unit’s pressing financial issues. I deeply regret that decision and the potential risks it presented for Algoma Public Health. I want to apologize to all those affected by these events, in particular, my former colleagues and the communities they serve."

Speaking to SooToday in a brief telephone conversation on Friday, Barker said she was called by the investigators on a Sunday and asked to attend a brief interview.

She said she went without witnesses, a recording device or legal representation, and was flabbergasted by what she said were inaccuracies when she finally saw the full KPMG report.

The investigators also made no electronic recording of the session and half of what was attributed to her was incorrect, she said, declining to specify which statements were inaccurate.

After leaving Sault Ste. Marie, Barker was hired in January 2016 as chief medical officer of health for the Arctic territory of Nunavut.

When her employment there ended, she was subsequently named as a regional medical officer of health in New Brunswick, based in Saint John.

Shaun Rootenberg got into legal difficulties after departing the Sault, charged with fraud over $5,000 when funds were allegedly taken from women he met on the eHarmony dating site.

Rootenberg, who could not be reached by SooToday for comment on the KPMG findings, was also named in civil litigation launched by Toronto billionaire Barry Sherman over his alleged involvement in a mobile-trivia app project headed by Ron Hulse of Rhulse26 Consulting.

Reached Friday by SooToday, Hulse said he's one of a "growing number of victims of a professional conman... who took advantage of me and my belief in the importance of second chances."

"I have closed this chapter and see no advantage of revisiting it four years later," Hulse said.

EDITOR'S NOTE: SooToday does not permit comments on court stories.