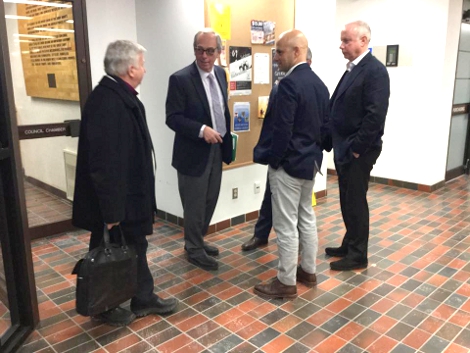 Bob Paciocco, lawyer for Canal Village Development Corp., has since provided SooToday with a document dated Thursday showing the company was incorporated on Monday.

SooToday has learned that the City of Sault Ste. Marie has been unable to confirm that the corporation actually exists and is asking pointed questions about the backgrounds of two of the businessmen who appeared with the developer at Monday night’s City Council meeting.

On Thursday, the city served notice to the apparently nonexistent corporation, indicating that its corporate search revealed there is currently no corporation named Canal Village Development Corp.

In a letter sent to Canal Village Development’s Sault lawyer Bob Paciocco, City Solicitor Nuala Kenny demanded to receive either Canal Village’s articles of incorporation or an explanation why it was presented to City Council as a corporate entity.

The city also advised that it wants nothing to do with two members of the Canal Village team: one named Henry Cole and another who gave his name as Shaun Rothberg.

The city refuses to deal with those two men or any corporation in which they’re involved.

In her letter, City Solicitor Kenny said there are no immediate concerns with Paolo Rovazzi from the Markham-based Canadian office of North American Development Group, who was presented at Monday night’s City Council meeting as the principal proponent.

The city has asked for clarification, however, about whether Henry Cole and the individual who identified himself Shaun Rothberg have criminal records and what their roles in the Sault Ste. Marie development will be.

The specifics of these concerns were not disclosed in the letter hand-delivered by the city yesterday to Canal Village Development’s lawyer.

As for Shaun Rothberg, the city wants assurances that he is not actually Shaun Rootenberg, a former professional poker player who did time at Correctional Service Canada’s Beaver Creek Institution in Gravenhurst after pleading guilty to multiple counts of fraud.

Media reports paint Rootenberg as a smooth-talking “serial fraudster” who drove a BMW X5 and defrauded Canadian and U.S. victims of more than $2 million.

The following prepared statement was issued by APH:

“The board of Algoma Public Health and Chief Executive Officer Dr. Kim Barker were shocked today to learn of information regarding a recent consultant, Shaun Rothberg, who provided services through a consultant retained by the board to provide interim financial [assistance] pending the hiring of a new chief financial officer.

“While the APH’s experience with Mr. Rothberg was defined by professionalism, and contributed directly to the resolution of a number of complex and longstanding issues, the board of health takes the revelations very seriously and is conducting an audit through an independent audit firm to ensure the integrity of its financial statements.”

Joe Fratesi, the city’s chief administrative officer, told SooToday yesterday that it was Shaun Rothberg who first brought the Gateway development proposal to the city.

“This whole notion of a possible development on the Gateway site was initiated with the city by Shaun Rothberg, but it was always going to involve bringing in developers,” Fratesi told SooToday’s Michael Purvis.

Fratesi said the city never considered Rothberg to be the proponent of the development.

He said it was Rothberg who made initial queries to the city about the availability of the Gateway site.

The city’s letter sent yesterday to Canal Village’s lawyer also asks about Ron Hulse, who was also part of the developer’s delegation at this week’s council meeting.

The city wants clarification from Canal Village Development on the following points;

Those questions must all be answered before the city will begin any discussions with Canal Village Development, the developer was advised yesterday.

The city is in the “very early stages” of its due diligence process for the proposal and it has not at this stage invested any time or money into the process, Mayor Christian Provenzano told SooToday’s Michael Purvis.

Reached by SooToday late Thursday, Canal Village principal Paolo Rovazzi said: “As a result of certain facts that came to light about the histories of Henry [Cole] and Shaun [Rothberg], they are no longer to be involved.”

Rovazzi described Henry Cole as a colleague and a longtime friend whose difficulties were long known to him.

“He has had some trouble in the past,” Rovazzi said. “He’s paid his debt and is moving on and as a friend I’m trying to help him do that.”

Rovazzi says it was Cole who introduced him to Shaun Rothberg.

This was when Rothberg was working for Algoma Public Health.

Rovazzi says he was told Rothberg was doing great things there.

Rothberg was also a passionate advocate of Sault Ste. Marie as a great place to do business.

“I really wasn’t interested in going up to the Sault, but on [Rothberg’s] insistence he convinced me to go up and see what the opportunities were,” Rovazzi said.

“The primary site that Shaun wanted me to look at was the Gateway. He introduced me to the Gateway site and a lot of the key players in town.”

Yes, Rovazzi took a liking to the waterfront property.

And no, he insists he never intended to make either Cole or Rothberg principals in his company.

“I was always proceeding as a principal in North American Development Group. Neither Shaun Rothberg nor Henry Cole were, in my mind, ever going to be active participants or principals in this deal or any other deal we become engaged in,” Rovazzi told SooToday.

Rovazzi said he knew nothing about Rothberg’s background until his second trip to Sault Ste. Marie late last year.

Both the city and Rovazzi are still interested in proceeding with development talks, and Rovazzi says he has no objection to Rothberg and Cole being excluded from both negotiations and active affairs of the corporation.

“I am completely fine with that,” he said. “They’re not involved.”

- with files by Michael Purvis