What happened to Rory Ring in Sarnia three years ago? 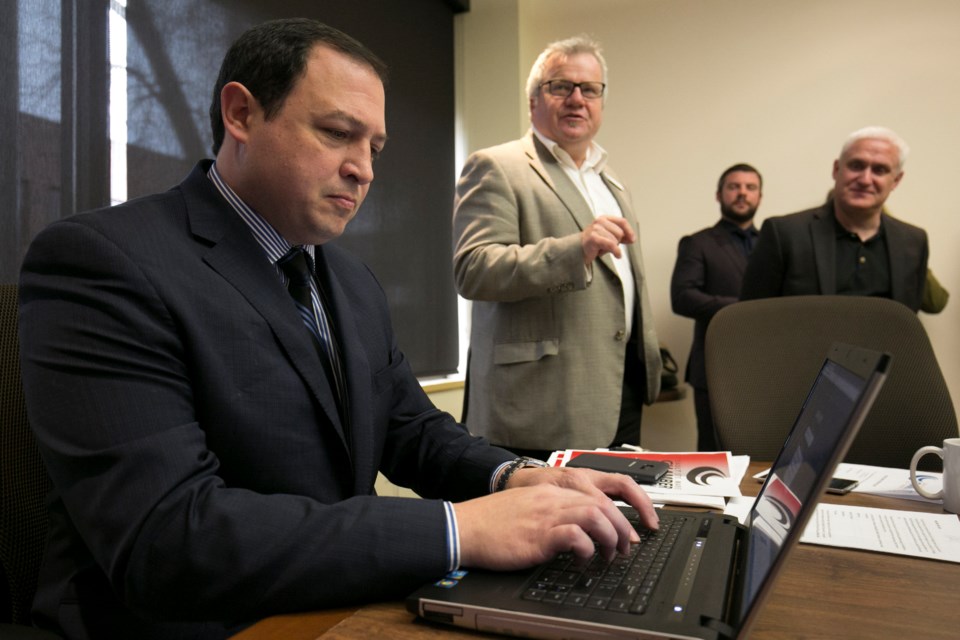 Mayor Christian Provenzano and Rory Ring last year at the launch of the 'We are the Soo' website. Kenneth Armstrong/SooToday

If you thought Rory Ring was saying earlier this week that he left his job at Sarnia Lambton Chamber of Commerce of his own volition, you might be wrong.

"Never said it was voluntary," the mayoral challenger told SooToday during a terse exchange of text messages Thursday about why he suddenly left his job as president and chief executive officer of the Sarnia Chamber three years ago.

Media outlets in Sarnia and business people there familiar with the circumstances surrounding Ring's abrupt departure are saying he was fired.

But Ring, on leave as president and CEO of the Sault Ste. Marie Chamber of Commerce to run for mayor here, issued a written statement Tuesday evening indicating: "I left the Sarnia Chamber because I had the strength, good judgment and integrity to stand up against a certain board member who had been accused of domestic assault and against a board member due to a conflict of interest surrounding a real estate transaction."

Those serious allegations are now making news in Sarnia.

The Observer said current members of the Sarnia Chamber's board aren't talking about Ring's job performance, but a past member told the newspaper that Ring's accusations against board members there are "false" and "inflammatory."

Ring told SooToday that he had no personal involvement in the real estate transaction he mentioned, other than being CEO of the Sarnia Chamber.

Asked by SooToday on Thursday whether he was dismissed, and if so, why, Ring said he was too busy campaigning to answer those questions.

"I am tied up and you have my letter to the editor," he said.

Ring's Facebook page indicates much of his time on Thursday was spent fixing election signs of fellow candidates damaged by Wednesday's wind storm, and at the $1.3-million Catch the Ace draw at the Esquire Club.

"I was able to [repair] a lot of signs for my electoral colleagues," Ring said in a video posted early Thursday evening. "Couldn't get all of them. Actually ran out of screws and I had a pretty good bucket of screws," he added.

On Tuesday, incumbent mayor Christian Provenzano released financial records from the Sarnia Chamber, showing that the organization had a deficit of nearly $80,000 at the time of Ring's departure, most of it accumulated during Ring's time in the job.

Ring has been promising to bring spending under control at Sault Ste. Marie's Civic Centre if he's elected.

His initial response to SooToday described the mayor's attack as being "filled with inaccuracies."

"We're going to get all that information and fully disclose it. It requires being positioned," he told SooToday.

Here's Ring's explanation for the Sarnia deficit: "During my tenure at the Sarnia Lambton Chamber of Commerce, the business community was suffering from, among other things the loss of the Motor Vehicle License Bureau contract: a loss of over 35 per cent of the Chamber’s revenue, heavy cross-border shopping due primarily to a favourable exchange rate at the time. Consequently, the Chamber was challenged to renew membership."

Also running for mayor in the Oct. 22 election are Ted Johnston and Kemal Joseph Martinovic.