Plea to those who abducted the Four, by Yorifumi Yaguchi

The author of the following is a Japanese poet and leader in the Japanese peace movement. The photograph accompanying this poem shows Sault Ste. Marie's James Loney (front right) protesting U.S.
Dec 11, 2005 4:47 AM By: David Helwig 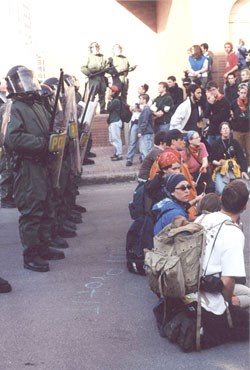 The author of the following is a Japanese poet and leader in the Japanese peace movement.

Yesterday's deadline for execution of Loney and three fellow Christian Peacemaker Teams members in Baghdad passed with no work on their well-being.

There's also no indication that the kidnappers made any contact with government officials yesterday.

Why did you abduct those Who tried to make peace without weapons? In Japan in Middle Ages Even the samurai did not draw Their swords against the unarmed.

Why did you abduct those Who opposed Israeli Military's demolition Of the Arab houses in Hebron, Who were protecting Palestine children On their way to school from being attacked?

Why did you abduct those Who publicly denounced the torture At Abu Graib and let all the world know, Who with the Iraqi families negotiate with U.S. Military for their missing husbands and sons?

Why did you abduct them? Aren't they the ambassadors of Peace and love from God you believe? They are gentle people who never retaliate Against those who harm them.

Aren't they a God-given Thread of hope? Please do not cut it. If you did it, The stones on the road will cry with sadness.