City is kind of happy about pump track delay 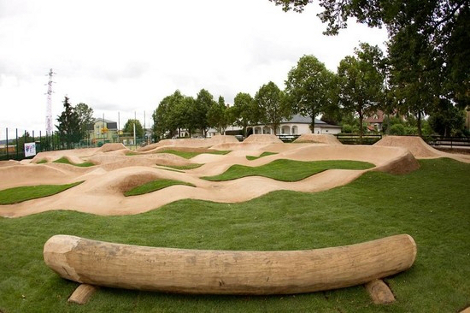 But it's for a good reason, says city Commissioner of Community Services Nick Apostle.

"We could actually see the project funded up to 50 percent if we are successful in an application to the Ontario Trillium Foundation," he said.

Which came as news he and private investors in the track were pumped about.

But, if the city and a group of local bicycle enthusiasts who have raised $75,000 toward construction of the pump track want to apply for an Ontario Trillium Grant Sault Ste. Marie is highly unlikely to see construction start on the track until summer 2016.

Unless the city and the bicycle group want to pay for the whole project themselves - which they can.

Apostle also told councillors that Ontario Trillium Foundation staff have advised that, if construction on the pump track before the foundation releases its decisions on grants, the city will not be able to recoup its costs on the project and also, it's very unlikely the application would be considered.

Planning for the pump track has been ongoing for about two years and construction on it was supposed to begin last summer.

Unfortunately, says Apostle, work that had to be done on the aqueduct under Esposito Park was considerably more involved than initially predicted so construction of the pump track was put off to this coming summer.

But, In late 2014, the City of Sault Ste. Marie learned that the Ontario Trillium Foundation is revamping its entire grant application structure and not taking any applications until 2015, Apostle told city councillors at its meeting this evening.

"I thought it was important to approach the private sector players to see if they were willing to wait," Apostle told councillors on Monday night.

The bicycle group is willing to wait and still have the $75,000 on the table.

"They thought it would be prudent to try to leverage as much funding for the project as possible," said Apostle.

"We expect the new application criteria and process to be released in late spring or early summer this year with approvals/denials being communicated in late summer or early fall," he said.

If the city is successful in its application for Ontario Trillium funding, any money it saves on the project could be placed in a contingency fund or used to offset the costs of other projects it wants to proceed with, suggested Apostle.

*************************
Earlier SooToday coverage of this story
All that pumping may have worked
Bicyclists will have to pump harder
Two-phase bike park 'not an option'
Parks and Rec to pitch pump track for Esposito Park
'Pump track' open house next week
City Council to be asked: pump or not to pump?
Reader Feedback