Should Scheer have done more to support Sonny Spina? 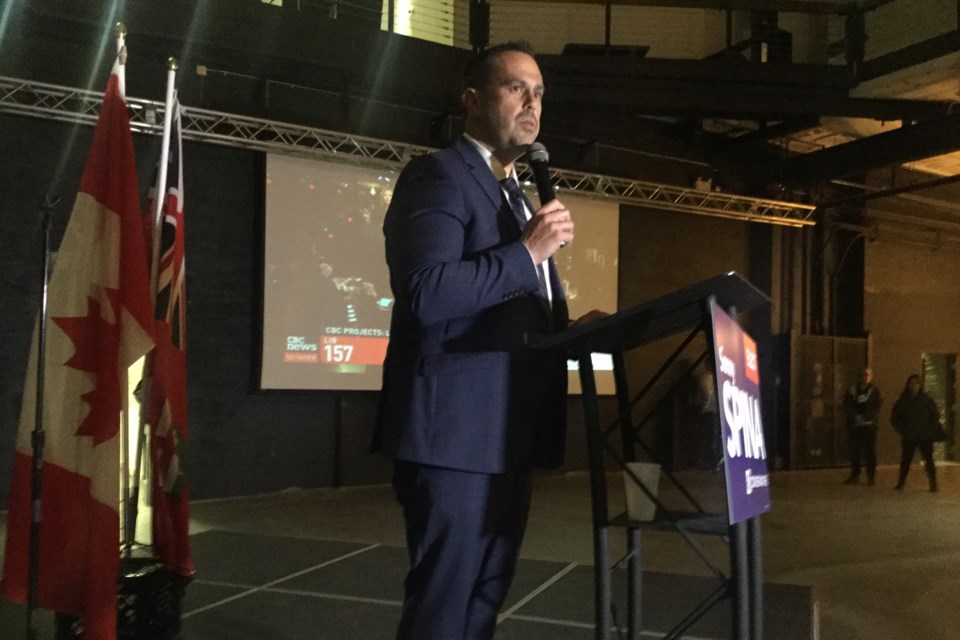 "Whoever was here for me didn't make a difference," Spina told reporters after his loss to Liberal incumbent Terry Sheehan by 2,732 votes.

"I was here for the people and I'll continue to do that." the Sault Ste. Marie police officer said.

Neither did Liberal leader Justin Trudeau, New Democrat Jagmeet Singh, Green Party's Elizabeth May or even People's Party leader Maxime Bernier, who lost his own riding of Beauce last night, which he'd held since 2006.

Could Spina have done better with more support from his national party?

"I'm not sure of that," he told SooToday.

"A lot of folks told me at the doors that they weren't sure what some of the national campaigns were or what was happening. They hadn't seen it in the media. And I told them this is why this is the most important part for me to come door-to-door, so I can hear from you what you actually want and see if it's actually in line with what our party is proposing."

When the ballots were counted in Sault Ste. Marie last night:

Voter turnout was 41,267 of 66,235 registered electors, or 62.3 per cent, not including electors who registered on election day.

Here in the Sault, Spina's street team kept knocking on doors all day Monday, even through the rain, until around 8 p.m.

Spina himself stopped canvassing only when he couldn't think of any other place he needed to go.

Over the entire campaign, he estimates more than 35,000 doors were visited.

Did he anticipate his loss to incumbent Sheehan?

"You're always ready for the best but you prepare for the worst as well," he told SooToday.

"My history has always taught me to be prepared for all outcomes in all situations, so absolutely, I was prepared for either outcome tonight."

"I wasn't really sure what to expect. There wasn't a lot of information related to polling in Sault Ste. Marie and I don't listen to polls anyway."

Just over 30 Conservative faithful were present at the Machine Shop for Spina’s address after his loss to Sheehan.

Spina commended his campaign team for its civility.

“Our team was amazing. They did absolutely nothing negative during this campaign,” he told supporters.

“That will never end and that is a promise that I give to this community."

The local campaign was remarkably civil, compared to the federal race.

"If you were to look back at those debates, I think you'll find that everybody acted admirably."

"Everyone treated each other with respect. Everyone allowed each other to make their points and continued on making their own points. I was very happy to see that."

Spina expressed hope that MP Sheehan will consider some of the suggestions he and his party made during the campaign.

"I'm always open to him to sit and chat and talk, because I do hope that they take some of the ideas that we had to move people forward and make ends meet."

He thanked his wife Lindsay for never once complaining when he answered voter emails in the middle of the night.

Here are the national seat counts from yesterday's election:

For a majority government, 170 seats are needed.

The following are results from Algoma-Manitoulin-Kapuskasing:

Voter turnout in Algoma-Manitoulin-Kapuskasing was 40,209 of 65,420 registered electors, or 61.46 per cent, not including electors who registered on election day.

NDP candidate McCleary says ‘we can work with the Liberals’
Oct 22, 2019 12:46 AM
Comments
We welcome your feedback and encourage you to share your thoughts on this story. We ask that you be respectful of others and their points of view, refrain from personal attacks and stay on topic. To learn about our commenting policies and how we moderate, please read our Community Guidelines.