NDP candidate McCleary says ‘we can work with the Liberals’ 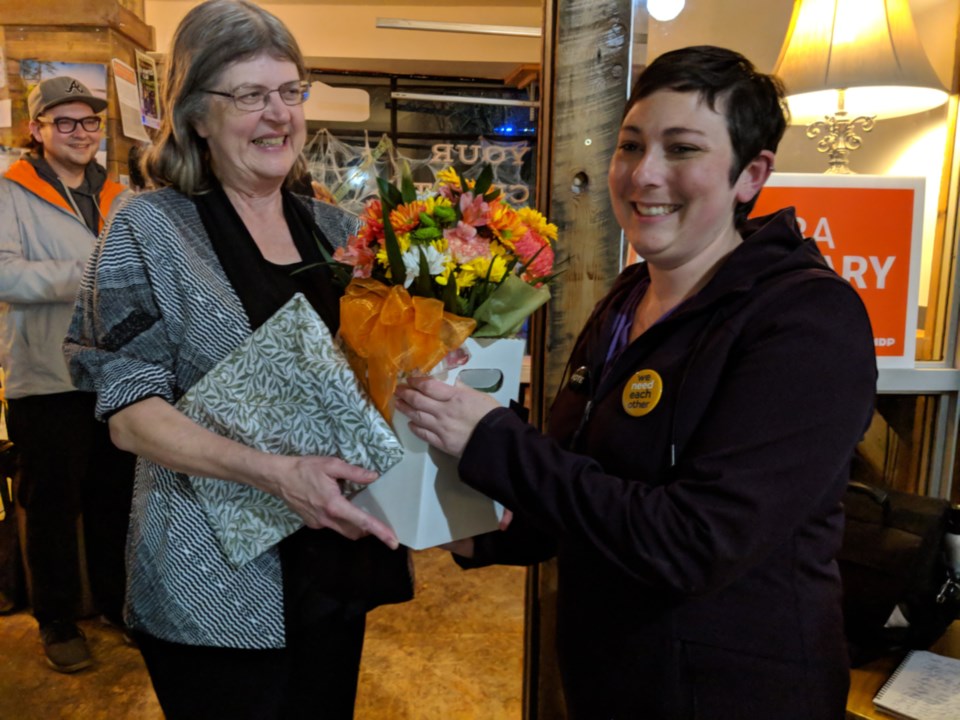 A post-federal election bash held Monday evening for Sault NDP candidate Sara McCleary was billed by the party faithful as a ‘victory party.’

Though McCleary finished third behind re-elected Sault Liberal MP Terry Sheehan and Conservative challenger Sonny Spina, she said the gathering, held at OutSpoken Brewing, was a victory party considering the NDP didn’t make much of a splash locally or federally in the early stages of the 2019 federal election campaign as the Liberals and Conservatives battled it out.

“We did better than anybody expected. We ran a really good, clean campaign. We didn’t get involved in the mudslinging. I think we can be pretty proud of ourselves,” McCleary said, speaking to SooToday.

“I know that (NDP leader) Jagmeet Singh’s performances in the debates played a major role. He did very well at the national level so I think that captured a lot of attention, and locally we knocked on so many doors and spoke to so many people, I think people heard our message and felt connected to it.”

Giving a clear hint of the political acrimony felt toward the Conservative Party of Canada, McCleary said “this wasn’t the result we were looking for (locally) but I think we ran a good campaign, and honestly, if it couldn’t be me, I’m glad it’s Terry.”

What of all the recent talk of a Liberal-NDP coalition?

“I think as long as the Liberals agree to certain priorities that we’ve set out, I think we can work together, absolutely. I would like to see whatever we need to make sure the Conservatives don’t form a government. I think we could work very well together,” McCleary said.

McCleary, 32, a married mother of two, works as a part time St. Vincent Place marketing and fundraising coordinator as well as being a Sault This Week freelance writer and doing freelance communications work.

McCleary, upon being nominated to run for the New Democrats locally earlier this year, spoke of the need for solid, full time work for Saultites and Canadians across the board.

To address that issue, McCleary said the Liberal minority government should do “no more studies.”

“Stop the studies and act. We need to support businesses to create good full time jobs and create those jobs in a green economy so that people don’t have to be scraping to get by.”

“What I heard from people mostly in this campaign was people saying they couldn’t afford to live their day to day lives, seniors especially. I heard that so many times,” McCleary added.

McCleary appeared to be energized, rather than discouraged, by Monday’s local election result.

“I’m going to be out there every day (as an activist), probably even more than I have in the last couple of years.”