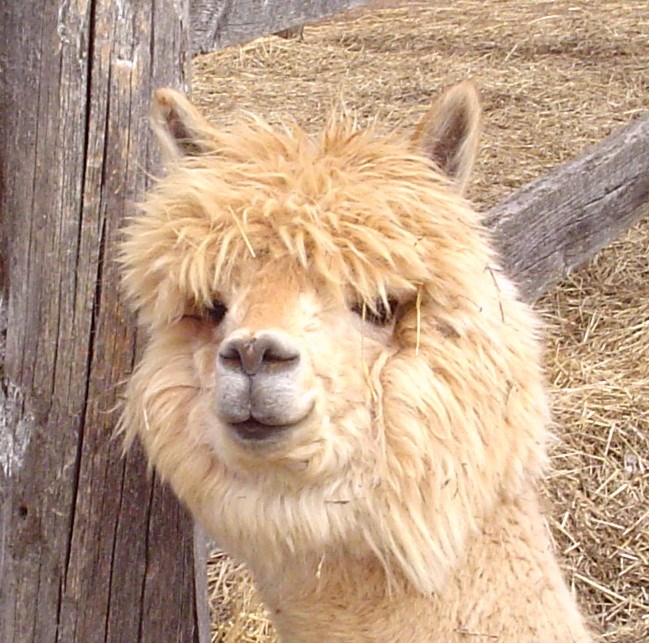 While Canadians still rely on the traditional therapy dog to soothe anxious (or sick) adults, Germans have discovered a unique therapy animal in alpacas. It’s in Europe that alpacas are especially employed with senior citizens who often have the calming animals reside in the fields outside community living facilities.

At Bruce Mines’ Meadowview Farms, former educators Denise and Robert Martel do more than sell their 'cashmere-like' alpaca wares at the Mill Market (including mitts, hats, scarves, duvets, pillows, toys, socks, shawls) – they offer tours to groups who find their interactions with the alpacas to be therapeutic.

“We not only have children come visit, but also groups of adults, such as those with Community Living Algoma, and the feedback we get has made us realize the potential of this soothing animal,” explains Denise Martel. “In fact, we often get told how ‘calming’ our farm is – and some people can’t even identify the reason why.”

Martel says that what makes the alpaca unique is its sixth sense. “It knows when someone is feeling vulnerable – and allows that person to cuddle and caress them.”

People have even written letters to the retired couple about the emotional impact a visit to the farm had on them – everyone from a grieving husband who had recently lost his wife to cancer to a five-year old child with ADHD.

“It was remarkable – this was a kid who literally could not sit still in the classroom,” Martel explained. “But when he came to the farm, he approached a nursing baby alpaca incredibly slowly and gently, and the mother allowed him to pet its baby.”

Martel says that normally a mother alpaca would not have allowed this to occur – especially when a newborn alpaca was nursing. “What's interesting is that it was clear the mother somehow knew the five-year-old needed to connect. She looked at the child and felt something, you could tell.”

For those not in need of alpaca therapy – but warmth during the winter months – alpaca is considered the supreme fibre.

“Alpaca is considered to be 7-8 times warmer than sheep’s wool,” says Martel.

“It adjusts to the temperature, so it can be cool in the summer, but incredibly insulating in the winter.”

Also, it tends to be hypoallergenic and people who are allergic to wool can tolerate alpaca fibre well.

For a full list of services or to schedule a visit, check out their website or visit them at the Mill Market on Wednesdays or Saturdays.