How decades of organization and activism fostered more acceptance, celebration of LGBT community in the Sault
Aug 3, 2020 1:00 PM By: Mike Hermida 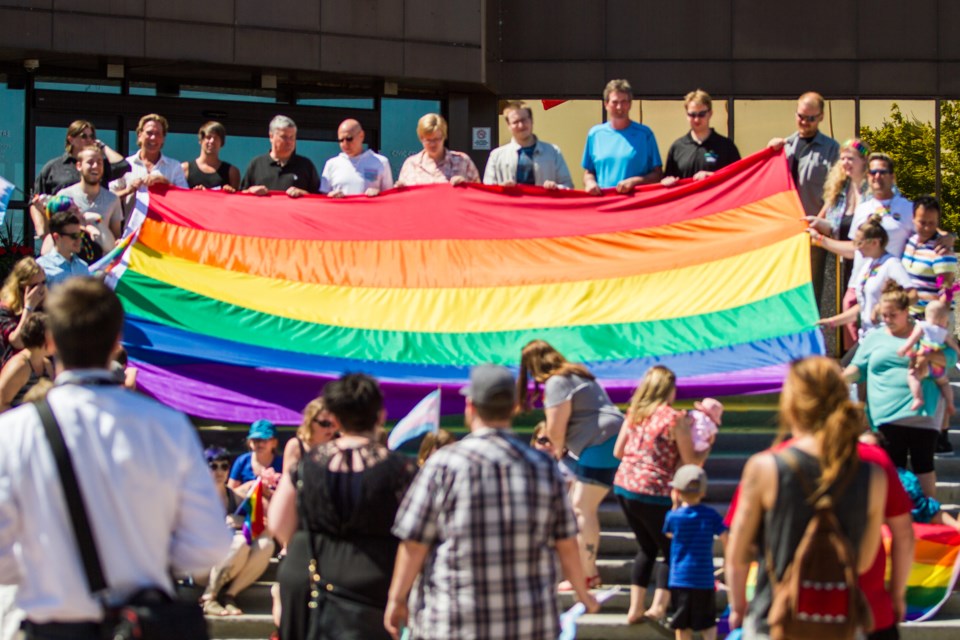 To many, the Pride flag flying in City Hall and plans to build a rainbow crosswalk by Clergue Park are symbols for how far we have come, as a city, in accepting LGBT people. This acceptance was built by decades of activism of members of the LGBT community.

Key milestones in this city’s queer history include the establishment of Sault Pride Community, and holding the first Pridefest.

Sault Pride is a local organization devoted to queer visibility and creating a welcoming environment. “We are a caring and dedicated community organization in Sault Ste. Marie and the Algoma district,” reads its website.

The predecessor of Sault Pride was a group of volunteers in the 1980s who organized under the name Algoma Pride. At a time where society as a whole largely stigmatized being queer, the organization hosted underground events where attendants could feel safe.

“Nobody was out and there was no representation in the community. If you were a queer person in Sault Ste. Marie, you had no one to go to [one of these events],” said Susan Rajamaki.

Rajamaki is the Chair of Sault Pride and sits on the Pridefest Organizing Committee. She points to lack of media representation as one of the culprits for the scarcity of openly gay people at the time.

Murray Carson and Bob Goddere (known in the community as “Mother Goddere”) were at the forefront of setting up queer-friendly events throughout the city.

Rajamaki recalled that Carson would rent a banquet hall for a night “and he would charge admissions and we would have gay dances.”

Over time, Algoma Pride was solidified into a proper club with a regular meeting space: the bar at the Algonquin Hotel.

Unfortunately, when Carson passed away in 2011, the spark for Algoma Pride fizzled out.

The modern Sault Pride was formed in 2014 after a disagreement with City Hall.

At the time, the Winter Olympics were being held in Sochi, Russia. As with any Olympic game, the host country propped up nationalist sentiment. This prompted many to point out the country’s homophobic laws, including a recently passed ban on “homosexual propaganda.”

In response, a number of municipal government buildings across Canada flew the Pride flag in solidarity with the LGBT community.

In the Sault, queer activists called on City Hall to do the same. But the municipality – under the leadership of Mayor Debbie Amaroso – denied the request.

“Sault Ste. Marie City Council was asked to fly the Pride flag (along with other cities). They refused to fly the flag and got things a little political in Sault Ste. Marie,” said Tim Murphy, local community member and regular performer at Pride parades.

Although Amaroso maintained the City had a policy against flying flags in protest, the activists insisted that it was a celebration of the gay community in Canada, not a protest of Russian law.

“That’s when I got involved in Pride Sault Ste. Marie — when I thought there was active discrimination at the municipal level.”

Murphy was not alone in his involvement. The incident in 2014 led to the formation of Pride Fest.

Since 2014, Pridefest has held a series of events each year in celebration of queer identities. These included parades, church services and film screenings.

Nevertheless, whether City Hall’s reservations on the flag were legitimate or guided by something else, Rajamaki does not find it important. “We don’t know and we certainly don’t care anymore. But they did a whole 360 degrees and are now a huge support in Pridefest.”

She attributes this shift to the Mayorship of Christian Provenzano.

The first Pridefest coincided with the formation of Sault Pride.

Teddy Syrette, a community member, won a grant through the social entrepreneurship initative Soup Ste. Marie, after pitching a plan to use the funds to pay for ongoing Pride activities and events.

“And that started out Sault Pride. He wanted to put that money toward the LGBT community," said Rajamaki.

Because of the hard work of activists and organizers over the decades, Murphy says the Sault is now a more welcoming city for queer folk.

Although there are still battles to be won, “the way that this city has changed from when I grew up here to now is incredible. I’m so proud of this city as a whole. It’s embraced the LGBT community so much."