Wawa residents will be the first to see Snow Cake

The producers of Snow Cake , the film that's bringing Sigourney Weaver to Wawa next month, definitely don't want to be viewed as some kind of cash cow sloshing buckets of money around the community.
Mar 3, 2005 6:31 PM By: Carol Martin 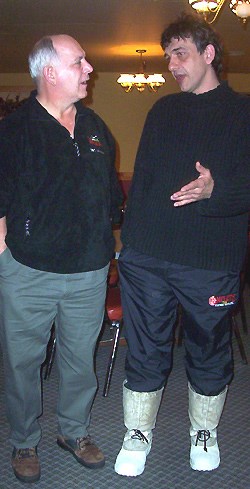 The producers of Snow Cake, the film that's bringing Sigourney Weaver to Wawa next month, definitely don't want to be viewed as some kind of cash cow sloshing buckets of money around the community.

At the same time, they do want to create a good image for Wawa.

At this afternoon's media conference at the Wawa Motor Inn,, Director Marc Evans said the crew will be looking to come back later in the year for an advance screening that will show the people of Wawa how their community has been depicted.

"What we can offer is mutual respect for you guys and that the image of the town will be in good hands," said Evans.

The screenplay for Snow Cake will allow producers of the feature film to showcase Wawa at its best, said Production Manager Bora Bulajic, shown today with Wawa Mayor Rod Morrison.

"It's very unusual to find a script that actually creatively works with the small setting of a Northern Ontario town," Bulajic said. "Usually in our business, we have to cheat, you know, a small-town area with a number of American flags."

'If you see people walking around your house, that's us'

Today, the advance team of five was walking, snowmobiling and driving around Wawa and area, scouting locations and blocking out scenes.

"If you see people walking around your house, that's us. Please don't call the police," said Bulajic.

The Wawa connection comes from Rhombus Media and Niv Fichman, who learned of the Algoma community while working on 1993's Thirty-Two Short Films About Glenn Gould..

When the script for Snow Cake found its way to Rhombus, Fichman told the other members of the team that Wawa was his favourite Northern Ontario town.

After an advance scouting of the town, the joint UK-Canada team tweaked the script to make it really reflect the location.

Name of town changed in script

The producers changed the name of the town in Pell's script to Wawa and included references to local landmarks.

Evans said he's very pleased the production is being filmed on location in Wawa because he identifies with the area on a personal level.

"I'm from Wales and South Wales is a mining region, very like this area was once, where the mines have shut and I identify very much with this part of the country," said Evans.

At today's news conference, Evans set up the movie premise:

"It's written by a lady called Angela Pell who has an autistic son and she's written a script about an autistic character called Linda who lives in a community like Wawa," Evans explained.

The film begins with Linda's daughter, Vivian, being killed in a car accident when she gets a ride from a character played by Alan Rickman (known for his role as Professor Snape in the Harry Potter films.) "The film centres around the relationship between Alan Rickman's character, who is called Alec, and the character Linda as played by Sigourney Weaver," Evans said.

Filming to start between April 5 and 10

Pell wrote the script in the seaside town of Brighton, England.

"She imagined, I think, an imaginary North American snowy landscape not really having been to either the States or Canada or to Wawa."

The film will be assembled from scenes shot in Wawa and in Toronto studios.

It will include local people as extras in the Wawa location shots.

Filming in Wawa will begin sometime between April 5 and 10 and is expected to continue for about two weeks, said Production Manager Bora Bulajic.