Provenzano and Butland: a tale of two mayors

The mayor and former mayor spoke publicly for the first time this week about their initially strained relationship and how they learned to make it work
Nov 7, 2018 11:10 AM By: David Helwig 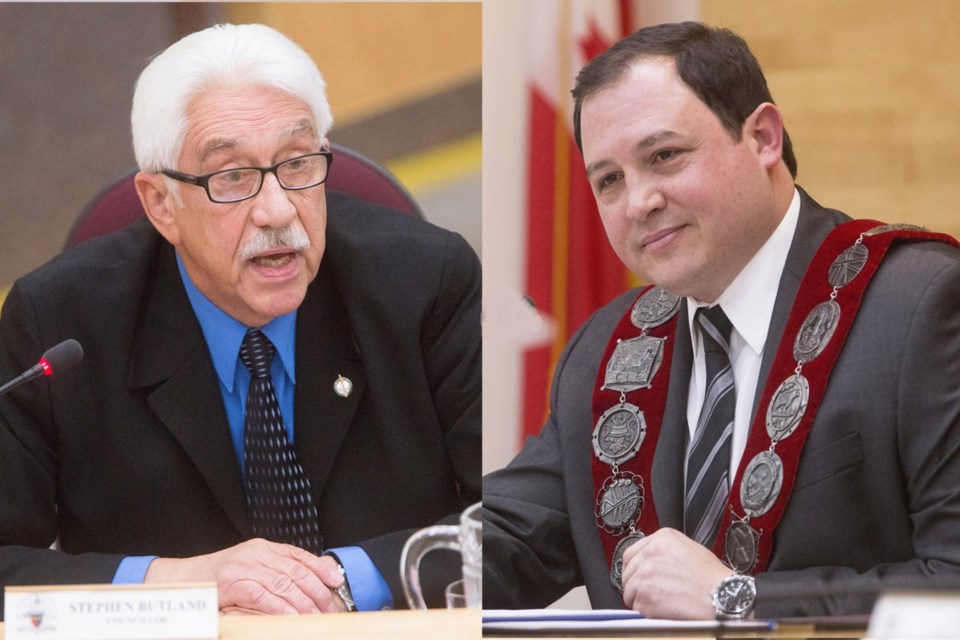 Steve Butland was a seasoned politico who knew his way around the halls of power: federal member of Parliament from 1988 to 1993 and mayor of Sault Ste. Marie from 1996 to 2000.

Christian Provenzano was a wet-behind-the-ears upstart with no experience in political office outside the University of Waterloo's Federation of Students.

Despite the potential for mayoral rivalry, both men worked hard to keep things civil.

To the careful observer, there were signs of tension.

At this week's City Council meeting, the mayor and former mayor opened up for the first time about their strained relationship for many months after the 2014 election, and how they learned to work together to get things done.

"We had a rough three years," Butland said during a session set aside at Monday's City Council meeting to recognize seven departing councillors.

"I said two," Provenzano shot back.

It was three awkward years, Butland insisted, before he met the mayor in his office and said: "You know what, I'm starting to see eye-to-eye with you on many of the issues, Have you changed, or have I changed?"

"He said maybe both of us have changed. Maybe that is the case," Butland told his fellow councillors this week.

"Thanks, Mr. Mayor," he said. "I think our city... we're on the cusp of something big. I really believe that. I think, Mr. Mayor, with your leadership, I'm confident that we will move forward in a very positive manner."

"Political life. There are those that say it's a blood sport, but it need not be," Butland said.

He reminisced about the inaugural meeting at which he was sworn in as mayor on Dec. 1, 2014.

Provenzano and the then-12 ward councillors then swore their declarations of office for the 2014-2018 City Council term.

"Steve said something during the very first meeting of this council, which struck me as odd at the time, because I wasn't sure where it was coming from," the mayor recalled.

Many months later, Provenzano figured it out.

'It was one sentence and it was a bit isolated. It was like an island. He said: 'We can be friends.' And he was right. I appreciate the leadership that he showed in that regard."

Addressing the full City Council, the mayor said: "No one person can move a community forward. Everything we did, we did together. Even if you dissented on something, even if you had a different opinion. When this body decided to do something it was a decision of this council."

"We can leave here today knowing that for four years, we did our best for our community. And from my perspective, I think we can say that we succeeded," Provenzano said.

Time was set aside at this week's City Council meeting for remarks from each of the seven outgoing councillors, representing a total of 83 years of service in municipal politics.

The following are excerpts:

"Susan Hamilton Beach [the city's director of public works] had the good fortune of having me [as a teacher] for two consecutive years in Grade 7 and Grade 8. She told me one time: 'I didn't get your jokes the first year. Started to get them the second year. She pointed out tonight, the first time I got elected, her class came for the inaugural meeting. She's here tonight for my last meeting."

"On May 1st of this year when I filed to run as a trustee with the Algoma District School Board in Ward 2, a member of the media said to me: 'You will miss this,' referring to City Council. I knew in my heart that was correct. I also knew that for me, it was time to move over and encourage others to step up and make their own run for public service through seeking to become a member of City Council. I wanted to continue to serve the community but in a different way."

"Thanks, Joe [Krmpotich] for helping me with my cantankerous iPad that always caused me grief at our Monday night council meetings.... Congratulations to my ward-mate, Councillor Shoemaker, on your re-election to another term.... Keep those resolutions coming. Sorry I can't be there to second a few."

"This part of my journey may be over, but my wife has plans for me. Some extra time to watch my favourite sports teams comfortably, including the Montreal Canadians, the New York Yankees and our Soo Greyhounds, just to name a few. Thank you very much Sault Ste. Marie. Thank you Ward 4. We'll see you on the radio."

"The three-term limit held true, even though it wasn't official. There's something to be said about that. That was my resolution, wasn't it?"

"I'm really looking forward to my next phase in life. I have a grandson now and my wife and I have been spending quite a bit of time with him. I'm still going to be doing my full-time job at the United Steelworkers.... I'm 62 now. I'm planning on retiring when I'm 65."

"Folks, this guy's got political future [motioning toward his fellow councillor Matthew Shoemaker]. Seriously, whether it's going to be mayor, MP or MPP. This guy's going somewhere in life.... Councillor Myers, the city's loss is the school board's gain. Those of you on the public school board, I ask you to allow more time for your meetings now that Councillor Myers has been elected."