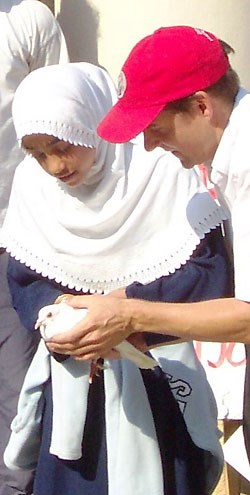 I have been trying to write this email for almost a week but every time I do I start to cry thinking of my dear friend James Loney.

I have known James since I was seven years old.

We moved to Sault Ste. Marie when I was seven and his family were the neighbours behind us.

My mother became very fast and good friends with his mother Claudette.

I became friends with both James and Kathleen.

It's difficult to write which one of my memories of James is my fondest (I have so many) but this is the one that makes me smile during a very sad time.

The church that we attended was called St. Jerome's. St. Jerome's had a Youth Group that the Priest held on Sunday nights.

One Sunday my four girlfriends Patricia D'Angelo, Merelice Dorigo (Finateri) Sandra Elgie (Mossa) and Anne Fournier (they also all went to public school with James but I didn't) and I decided to attend.

We all sat at a table and James joined us.

There were many teens in the class that night they were all quiet and attentive but for some reason instead of listening to the priest our table started messing around and laughing and making noise.

The priest warned us a few times that he was going to ask us to leave if we didn't stop.

We quieted down for a little while but then something came over James and he poked my arm with a sharp pencil!

I let out a scream at the top of my lungs and the priest said "That's it! All of you, get out and don't come back!"

We stood up and left the room and I'll never forget James looking at me and saying "My mother is going to be so mad at me for getting kicked out of the Youth Group!"

James was completely in shock - I don't think that he's ever been in trouble before that!

Needless to say, looking back at it now, it was pretty funny but James should have known better than to sit at a table with us!

My heart and soul goes out to James and his family and friends.

I am praying for him constantly and I know in my heart I will see him again.

Soon we will all be sitting around a table, talking to James and I am going to poke him with a pencil!

Like many Saulites and Christians worldwide, I have been following the news re: the Canadian hostages in Iraq.

One of the hostages, James Loney, is a friend from St. Mary's College.

We were active participants in the Church, and were self-proclaimed "Encounterites" – and ironically, live in the same neighborhood just minutes from each other here in Toronto.

I knew he was abroad and doing what he loved most – helping people and being part of the solution.

Everything the media has said about James being a nice guy is true.

James is truly a remarkable human being and an example of selfless service to mankind.

Please sign the online petition to save him and his colleagues.

Also, please keep them in your prayers.

With appreciation and thanks,

David A. Ontonovich Toronto, ON

Earlier SooToday.com coverage of this story