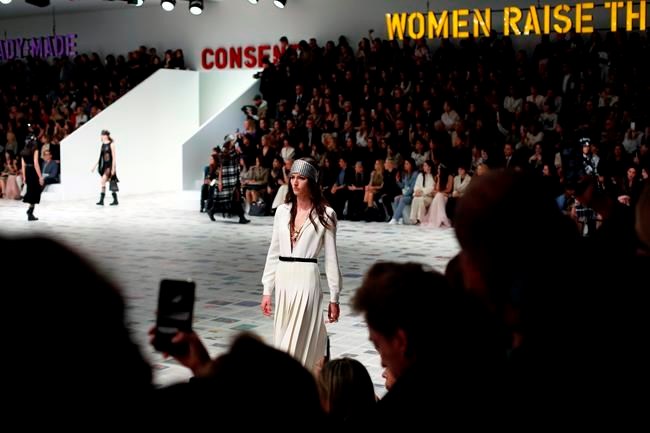 It that the house's first ever female designer, Maria Grazia Chiuri, would continue to explore her touchstone of feminism for her fall-winter 2020 designs.

The set, the fruit of a collaboration with artist Claire Fontaine, made a strong impact on VIP guests — including actress Sigourney Weaver and singer Carla Bruni. Some paused for thought, especially as the show was delayed, in discussions of the #MeToo era and its influence on art — one day after Harvey Weinstein was convicted of rape and sexual assault and led off to prison in handcuffs.

The designs themselves cleverly riffed off the empowerment idea at the start: Such as the Dior signature bar jacket, re-imagined as ribbed and angular, and twinned with a men's shirt and business tie on a female model with a short pixie hairstyle. It was the show's strongest fashion statement.

The feminist and androgynous musing sadly faded quickly in the 84-look show, suggesting that for Chiuri it was more of a marketing gimmick than a developed creative idea.

The rest of the show featured diverse silhouettes that delved in and out of the rich Dior archives — checks, polka dots, knitwear in jackets, shirts and pants — with varying degrees of success. A 1970s boho vibe was captured with a leitmotif of the printed silk headscarves.

The checks, which evoked Dior's longtime head Marc Bohan and designer during that retro era, appeared in beige and occasionally in a total look style. At times, twinned with fringing, it unfortunately did not look far off a luxury table cloth. Sandal flats, meanwhile, brought this ready-to-wear collection firmly down to earth.

A reminder of the worries of daily life was enclosed in the program notes. While none of the fashion insiders, bar one, seemed to be wearing a mask against the new coronavirus that had shaken Milan Fashion Week, Dior wrote that “all our thoughts are with our teams, clients, friends and partners in Asia, Italy, around the world.”