Tradition is part of the backdrop at Savoy’s Jewellers 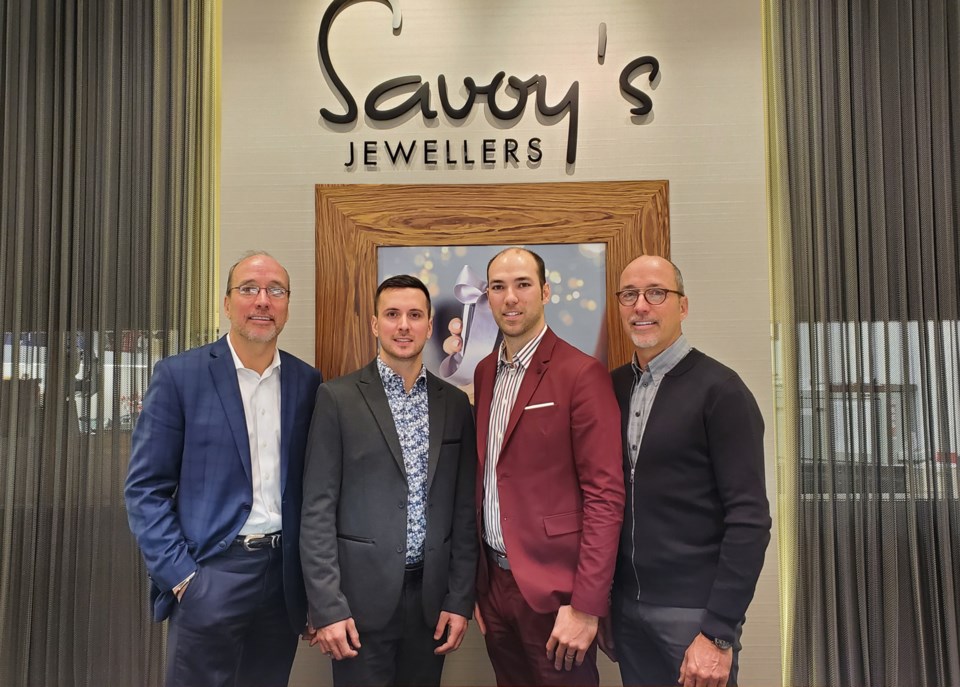 With the holidays just around the corner, many people are now looking forward to a season of honouring family traditions. At Savoy’s Jewellers, however, tradition is just a part of doing business year-round. Especially considering they’ve had three generations of family working in the store for over 65 years.

Savoy’s Jewellers was established in 1952 by Edmond Rosset and John Anthoine. After decades of operation, the store’s founders transitioned out of the business, passing the reigns to Edmond’s sons, Richard and Rodger. Continuing with tradition, the brothers Rosset have now embraced their sons Nicholas and Ryan into the business which operates out of their original Queen Street East location, sharing a storefront with their goldsmithing facility.

The Station Mall is home to Savoy’s Jewellers’ second location.

On keeping a family tradition going, Nicholas Rosset says entering the business was a calling he experienced at a young age. He remembers washing the windows at the Queen Street location and hosing down the sidewalks every Saturday. As an adult, he initially worked as an engraver and, since 2008, has been actively involved in all aspects of the business.

Nicholas’ cousin, Ryan started a career in construction but felt that familial pull into the jewellery business. “When I was in high school, I had worked here part-time as an engraver and runner between the stores,” says Ryan. “To this day I don’t have a full explanation as to why I made the change (from construction) but I knew this business was in my blood.”

Ryan takes great pride in his certification as a gemologist and goldsmith and enjoys working ‘at the bench’ remodelling or refurbishing heirloom jewellery and designing new pieces. All four Rossets are certified through the Gemological Institute of America (GIA) which is recognized as the leading source of knowledge, standards and education in gems and jewellery.

Ryan refers to it as the “Harvard” of the jewellery business.

Working in the jewellery business has been a positive experience in more ways than one for the third-generation Rossets. Not only are Nicholas and Ryan fulfilling a family legacy but they also get to play a big role in the milestone events in other people’s lives.

“For me, I was here from an early age and always loved it,” says Nicholas. “In the jewellery business, 99-and-a-half per cent of the time it is about happy people who want something to celebrate an occasion or to buy a gift for someone they love.”

He adds that there have been countless times that he, or other staff members, have known about an upcoming engagement even before the fiancée-to-be does! Confidentiality is essential and so is respecting the fact that sentimental value is just as important as what’s monetary.

When you ask Nicholas about what tradition in his line of work means to him – aside from the Rosset name – he is quick to state honesty, trustworthiness and expertise.

“People come here or send their friends to see us because we’ve been trusted by their friends and family,” he explains. “We have many customers whose family members have been coming here for years.”

Whether it is a new purchase or a customized piece created in their own goldsmithing facility or an heirloom jewellery repair, Nicholas says that people know that Savoy’s brings quality and added-value to their purchase. They pride themselves on keeping with the times, offering on-trend jewellery selections as well as traditional styles.

Outside of the family business, one tradition important to the Rossets is participating in the Lung Association’s Festival of Trees fundraiser with their ultra-popular Diamond Tree. A twist on this year’s tree, participants will receive a raffle entry with purchase of a keepsake tree ornament. One lucky name will then be drawn to receive a credit of $1,500 at Savoy’s Jewellers.

The Festival of Trees will be held at The Machine Shop from Thurs., Nov. 14 until Sun. Nov. 17.

Savoy’s Jewellers can be found at 290 Queen Street East, in the Station Mall or online at www.savoysjewellers.com.