Want to be better at what you do? You need to understand commitment, says Ken Belanger

The former NHLer, who now runs a training facility, says a big part of what makes people great is in their heads
Nov 15, 2019 4:00 PM By: Bill Montague 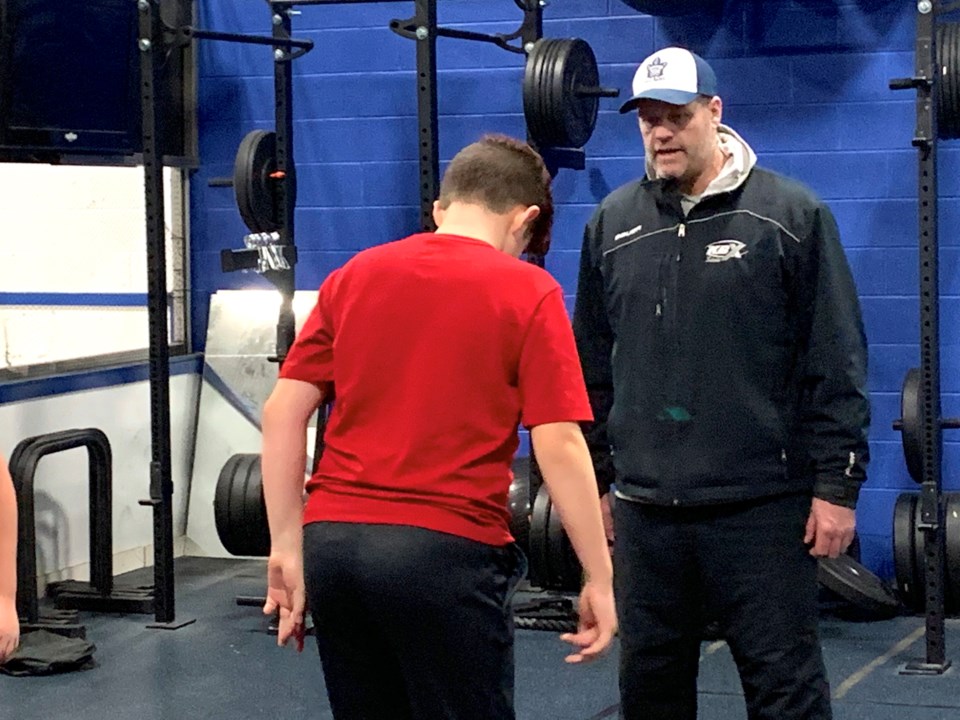 Ken Belanger works with a young athlete at his KBX Hockey facility. Bill Montague for SooToday

Ken Belanger stands at the front of the class and lectures a group of elementary school children on topics such as hard work, bullying, self esteem and believing in yourself.

He emphasizes that his KBX training facility is a place where making fun of others won’t be tolerated and the essence of his message is best described by the old adage ‘where there’s a will, there’s a way.’

And Belanger should know.

If ever there was a story of a guy who rode the mantra of hard work to his profession’s highest level, it is Belanger. The retired NHL heavyweight played parts of 10 seasons in the NHL, suiting up for the Toronto Maple Leafs, New York Islanders, Boston Bruins and Los Angeles Kings, but today he can be found at his KBX facility, working with a variety of athletes who just want a place to train and strive for success.

And for Belanger, success doesn’t always mean being the best among your peers. He just wants you achieve your personal best, whether you’re an elite-level athlete or just a person looking to get in shape.

“People say they want to be great,” said Belanger, who accumulated 695 penalty minutes during 248 NHL games in which he battled with some of the sport’s most-feared scrappers. “Some want to be hockey players, doctors, lawyers, but they do nothing to become it. I’m making sure the ones who do come into the gym understand what commitment should look like, especially if they want to become better at what they do.”

The 45-year-old Belanger, who retired from hockey in 2006 following multiple concussions, knew he wanted to do something that provided other kids with an opportunity to chase their dream. His facility is complete with synthetic ice, stationary bikes, stick-handling equipment, rowing machines, kettlebells, slam balls and much more.

“Too many kids have a lack of confidence or a fear of failure. I want to expose those elements to the kids and let them know they can overcome those feelings and to not be afraid to fail or afraid that kids will laugh at them.”

He does that through various talks. Belanger, despite his imposing six-foot-four 250-pound frame, is a big kid himself. He has this unique ability to connect with the kids. He laughs with them. He loves to joke around. He also pushes them.

“I was fortunate to play at the highest level and I had some of the best coaches in the world mentor me,” said Belanger. “I want to give someone else that same experience. It doesn’t mean you have to be a hockey player. You teach things at the grassroots and it starts with work ethic and commitment.”

And he doesn’t do it alone. While he doesn’t have anyone on staff full time other than his wife, Sandra, he said he’s blessed with the part-time services of former Soo Greyhounds defenceman Mike Quesnele, along with Aidan Wright, Mike Schug and Mike Barbeau.

“They breathe what I breathe in terms of our message,” Belanger said. “They’re so dedicated to those kids and I’m blessed to have them.”

Since retiring from the game, he said the sport has changed dramatically, going from a physical, chippy game to one that focuses on speed and skill.

“We’re way more educated now,” he said. “And with education comes evolution. Everyone in the game, coaches, players, scouts, are a lot more educated because of the Internet. Players don’t stand up for one another anymore but I think it’s wrong to say that’s wrong. It’s just the way it is now. You have to adapt and continue to evolve.”

His facility offers so much for so many. He has a relationship with the school boards in which he brings elementary kids in for an hour of fun and fitness. His place is also a hit for birthday parties. Aspiring hockey players come to increase their strength training or just work on their shot and skating while soccer groups have solicited his services for their teams.

But among his favourite group to work with are special needs kids. He said he gets so much enjoyment watching them get some exercise while having fun at the same time. It is not a membership based club, but one in which athletes and users pay a fee for his or the club’s services.

“I love working with kids,” said Belanger, who has four kids of his own, Emma, Katie, Ken Jr. and Connor. “I learned from (motivational speaker) Tony Robbins long ago through cassette tapes that when you’re talking to people, you have to put yourself in their environment so they can understand you.

“I can joke with them (kids) and motivate them. I just love working with special-needs kids. Seeing them smile and jump and have fun means a lot to me. They don’t often get challenged so it’s important for me to push them and challenge them. I’m an all-in type of guy. When I do things, I’m 110 per cent in and if I don’t get that back, I feel like I’m failing.”

For Belanger, success comes with education. He seeks out a lot of online material and talks occasionally with former NHL star Gary Roberts, who runs the Gary Roberts High Performance Training facility in Aurora, Ont., which focuses on high performance training and sports nutrition for professional and amateur athletes.

But for as much as he puts into making sure KBX runs smoothly, he admits that the brains behind the operation is his wife, Sandra, who is actively involved and who works behind the scenes, scheduling athletes and groups into the facility and dealing with parents and emails.

“My wife runs everything,” he said. “She’s the brains behind the operation. She organizes and plans things and the only thing I do is show up. She takes pride in making sure everyone has her cell phone (705-941-0202) and she’s pretty dialled in when it comes to communication.”