Pat Nardini says it will be tough on young athletes if this year's elementary meets are cancelled, as they are likely to be due to COVID-19
Mar 26, 2020 10:45 AM By: Bill Montague 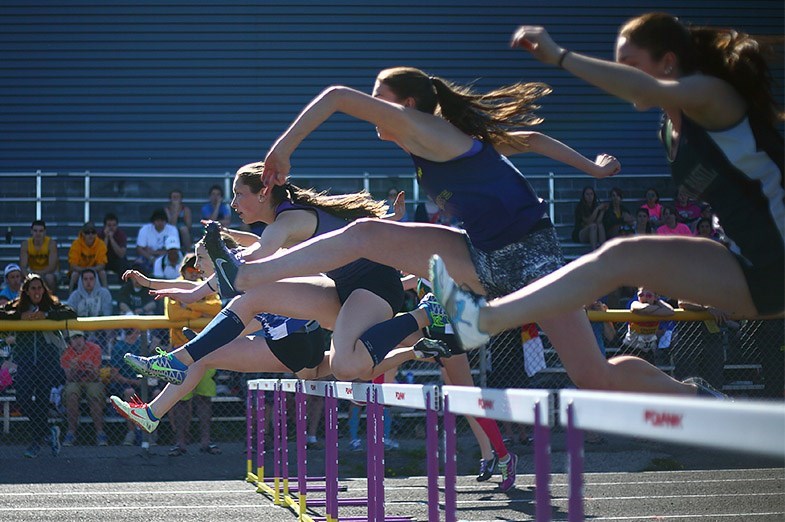 Being involved with elementary school track and field, Pat Nardini has been able to spot the up and comers. Athletes compete in NOSSA track and field in this 2014 file photo. Kenneth Armstrong/SooToday

If there’s been one common denominator at the Huron Superior Catholic District School Board’s elementary track and field meet over the last 20 years, Pat Nardini is it.

Aside from organizing the meet for 18 of the last 20 years and doing the stats and announcing the last two years, Nardini has been a fixture at the annual event.

But as he ponders yet another season up in the booth, the former St. Mary’s College teacher knows that COVID-19 just may do to the event what nothing else has been able to do: wipe it right out.

That’s not only a sad possibility for Nardini, but also for the hundreds of kids, parents and relatives who look forward to the event annually, particularly those Grade 8 students who may never get another chance to win a gold medal, set a city record and line up with teammates in pursuit of a relay or team victory.

“Just like with everything else, once time is gone, you never get it back and it doesn’t look like it’s going to happen,” said Nardini. “It might be three to four months before they get a handle on this thing (coronavirus) and that’s unfortunate for the kids.”

And for Nardini, it has always been about the kids. He coached high school track and field during his teaching days at St. Mary’s College, mainly working with the sprinters and long-distance runners. He also coached wrestling, gymnastics and football.

But his first love when it comes to coaching has always been track and field, mainly because he started running at age 35 in an effort to start living a healthier lifestyle.

“I was getting fat, slow and I quit smoking and had to get back in shape,” Nardini says with a laugh.

And get back in shape he did. He ran close to 17 marathons, including ones in Detroit, Toronto, Traverse City and Saginaw so when it came to coaching and organizing the meets, well, lets just say he had a bit to offer.

“I do enjoy it,” Nardini said of his current involvement. “It’s not a chore for me. You see some of the kids every year and there’s always some that stand out. I get to see them from the youngest age category all the way up to Grade 8. You remember their names and I always like to watch for the records when the records get set. You really like to see that.”

But this year, with such a scare due to the COVID-19 pandemic, it’s unfortunate that some of the graduating kids will never get that chance.

Isabella Fata, one of the fastest female sprinters the Sault has seen since the days of Toyin OIupona, is in Grade 8 at St. Mary’s French Immersion and was touted to have a real shot at setting a new mark in the 100-metre event.

Olupona, a former Sir james Dunn Collegiate standout, went on shine at the University of Tennessee, where she set a career best time of 11.35 seconds in the 100 metres and qualified for the Canadian team for the world championships.

For Nardini, there have been many athletes over the years that have left an indelible impression on him. He has seen all the speedsters and the endurance runners and he’s witnessed several record-breaking performances.

But ask him if there’s one athlete or race that stands out among his decades of coaching and organizing and Nardini is quick to answer.

“I had a kid running senior boys hurdles (Mike Ianni) and he was a good runner and when the race started, he tripped over the first hurdle, but instead of quitting he got up and caught up to everyone and won the race,” he said.  “It was something to watch. He fell down and was just about to give up and then he said to himself ‘the hell with it, I’m going to get up and go’ and he went on to win the race.”

Now 78, Nardini said he has a wobbly knee – he’s preparing for knee replacement surgery in the near future – so he had to give up the convening duties to Eddie Belanger.

However, Nardini is still around. He watches the races from the press box at Jo Forman Track, where he compiles and announces the results. He said there are many others who contribute their time as well, adding that the reward at the end of the day is seeing the smiles on the kids’ faces.

“I was involved in high school and I coached track and field there so I knew enough about the sport so when they asked me to organize it, I figured why not,” he said. “It was not total volunteering. I did get paid for it but I honestly enjoy doing it and when everything goes smoothly, it’s great.”

And for Pat Nardini, it’s been a great ride, from his teaching and coaching days, to his convening days and maybe, just maybe with a bit of luck, that common-denominator will be back again, watching record-breaking performances, calling out names and seeing those gritty, never-give-up efforts that tend to leave lasting memories.