Lambert’s perseverance has paved the road to great things

Former player, coach hopes to pass on some of the valuable lessons he was taught
Oct 29, 2020 2:30 PM By: Bill Montague 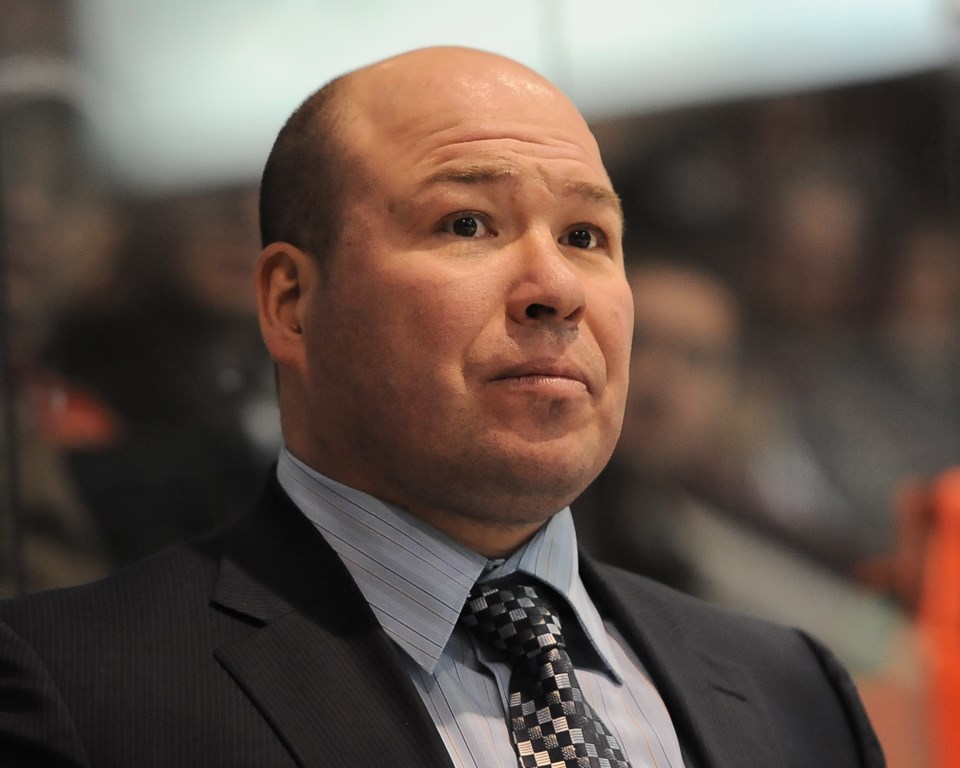 Denny Lambert thinks back about the messages. He reflects on the blood sweat and tears that were shed during his journey to the NHL. He recalls the times he thought of quitting, when the naysayers questioned his ability and wondered aloud if he ever belonged with the big boys.

But through it all, Lambert never gave up hope. He refused to listen to the whispers and instead let his blue-collar work ethic and competitive spirit fuel the dream he had ever since he was a baby-faced kid growing up in Wawa, Ont.

Today, after 487 NHL games and a coaching stint in major junior hockey, Lambert is back behind the bench and is hoping to pass on some of the lessons he learned from some of the game’s greatest mentors.

Why does he do it, you wonder?

It’s not for the money. It’s not for the glory. It’s not to get back to the OHL or NHL. He does it because it’s in his blood. He’s obsessed with the game of hockey and being away from the rink left a void in his life he thought he’d never feel.

“The biggest thing for me is if I’m not at the rink, I feel like there’s such a void in my life,” said Lambert, who is in the midst of his first season as head coach of the Northern Junior Hockey League’s Soo Thunderbirds. “I love the feeling of being able to teach kids what it’s going to take to get to the next level or to achieve your dream. I’ve been there. I’ve played in the minor leagues and in the junior leagues and I didn’t have anything handed to me.

“I’ve had success and I’ve failed, but at the end of the day I still love sitting around talking hockey and being around the guys.”

Due to COVID-19, the Thunderbirds are currently practicing Monday to Fridays, but Lambert is optimistic that at some point the go-ahead will be given to play games, even if it’s in a bubble type setup or just against one northern Ontario team.

For Lambert, his journey to the NHL should serve as an example to kids that hard work can sometimes overcome skill and hype. At five-foot-11 and 200 pounds during his playing days, Lambert was considered too unskilled and too slow to play in the NHL.

He had every reason to quit. But when things got tough, he got tougher.

Like the time when he hit former Hounds goalie Kevin Hodson in the throat during a warm-up in Kitchener during their OHL days.

Hodson, the Hounds’ star goalie, was injured and Lambert paid a price and was benched that game by former coach Ted Nolan, who felt Lambert should have known better to fire a puck up high and hard during warm-up.

“That was the one time I almost quit,” Lambert said. “I did something stupid in the warm-up and hit Hodson in the throat. I didn’t play a shift in that game and after the game I told my dad I was quitting and then had a heart-to-heart talk with Ted. He said ‘don’t give up, you don’t quit.’ He benched me at the time and it was the right decision and while I didn’t agree with it at the time, I eventually calmed down and talked to my parents some more and with others and I learned from that.

“The message after is what was important. There was communication involved and Ted wanted to sit down and talk about what happened and to me it was a sign that he cared. He built me back up and that’s why Ted was so influential in my career.”

And now, Lambert, a police officer with Batchewana First Nation, feels a commitment to do the same to others. He wants to give back to the community and somehow siphon every ounce of energy and commitment out of other wide-eyed kids. He’s been there. He knows what it takes and he’s excited to pass along that knowledge.

“A coach can really have an impact on a player,” said the 50-year old Lambert. “I remember playing for Rick Dudley in the IHL (San Diego) and I didn’t play for the first 20 games of the season and I think we won all of them.  He literally, literally made me bike extra, work out extra and I had to do twice as much as everybody else.

“The biggest thing he told me is ‘Denny, you have a chance to make it, I’m telling you right now, but you have to be the best-conditioned person’ so he bagged me and I finally made it.

“He wasn’t punishing me. The message was if you believe in yourself and get yourself in unbelievable shape, you can make it. People like that (Dudley and Nolan) kind of grab you along the way and give you that boost and that belief in yourself.”

For Lambert, the memories are vivid and touching. There are so many that made a difference in his life, so much so that that’s what drives him to try and be that positive influence on others. He credits people like the late Kurylo, Nolan, Dudley and Don Waddell for putting their faith in him and recognizing all his hard work.

“Those guys helped me get through tough times and helped me believe in myself,” Lambert said. “They took me under their wing and said ‘there’s something here, keep going.’ To be able to grind out 487 games in the NHL is something.

While those coaches helped Lambert grow as a player, it was Craig Hartsburg that really helped him grow as a coach. Hartsburg, like Lambert, was a fiery competitor, who hated losing, but his hockey sense was off the charts and he saw things a lot of others didn’t.

He was a guy who paid attention to detail and Lambert learned that detail, when you’re the man behind the bench, is everything.

“Getting a chance to work with Craig on a pro level and seeing what a great coach is all about, that was fantastic,” Lambert said. “When Toots (Zoltan Kovacs), myself and (Terry) Barbeau were all together when Hartsy was coaching, it was probably some of the most fun times I’ve ever had in hockey. It was a great group and the biggest thing I learned was structure of playing and the teaching aspect of it. Craig is very detailed in his stuff and wasn’t afraid to be creative offensively even though people said and think he was all defensive.”

Lambert says part of being a great team is having each other’s back. He said teams win championships and it’s critical everyone buys into that concept. He learned all about being a good teammate during his final year with the Hounds with the likes of Bob Boughner and Adam Foote, who guys that went onto the NHL and were consummate leaders.

“I think our team with the Soo Greyhounds that went on to beat Eric Lindros and the Generals was really special,” Lambert said. “That was our first time to the Cup and the way they prepared and battled all year was amazing. Guys like Jarret Reid, Ralph Intranuovo, Adam Foote and Bob Boughner, those guys made me understand how competitive it was going to be because we wouldn’t let each other off the hook. That team made you believe in that identity you needed to have to be successful.”

For Lambert, they are life lessons. He has been through it all, the ups, the downs, the losses, and the wins.

And while his Soo Thunderbirds season has been interrupted by COVID-19, he remains optimistic that at some point, games will be played and the lessons will be learned.

After all, he’s never given up on anything in his life so he’s not going to give up on hope now.