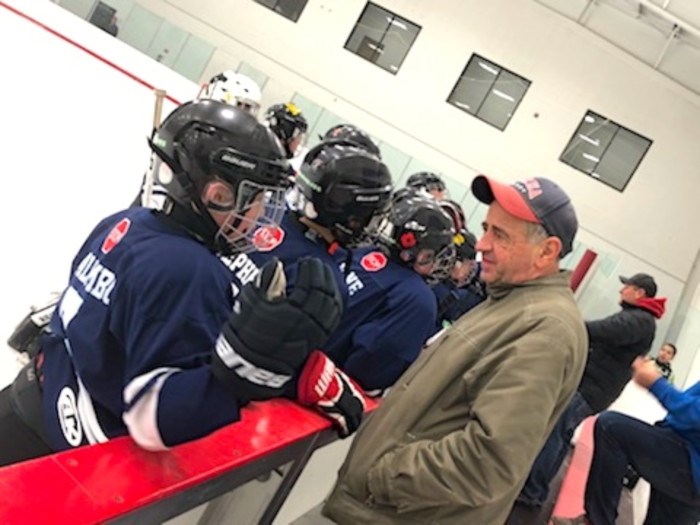 During a time in life when most people his age dream of escaping Sault Ste. Marie’s harsh winters for the warmth of Florida, Joe Longo dons his winter coat, puts on a pair of gloves and heads out to brush the snow off his vehicle on yet another frigid winter night.

There is hockey to be played and after 40-plus years of coaching, the 65-year-old Longo is right where he wants to be; in the deep of winter, behind the bench, shouting instructions, giving words of encouragement and teaching kids the do’s and don’ts of the game of hockey.

Aside from his wife, Wanda, of 37 and a half years and his three sons, hockey has been like a second marriage for Longo. He has coached everything from Tom Thumb to Midget and those that know him well say he does it with a passion and intensity that is aimed at making today’s youth better.

“Joe’s honestly one of the best hockey guys I’ve ever had the privilege of coaching with,” says Kevin Girardi, who is in his third year behind the bench with Longo. “His knowledge of the game dates back like 43 years or so. He’s a book of knowledge and a pleasure to be around.”

While so many volunteers step up to the plate during a time when their kids are playing, there is no mistaking Longo’s motives. He simply loves the game and he embraces his role with the kind of passion all coaches should exude.

“The man has dedicated his life to minor hockey,” said Chad Bouchard, who, as head coach is in his fifth season of working with Longo, this year for the Team Essentials in the Soo Pee Wee Major house league division. “Most coaches stick around the game for the higher level. This man’s dedicated 43 years to house-league hockey. He’s the best coach I’ve ever been around by far. He brings seriousness, humour and he brings discipline.

“You may not be winning all your games, but you never have an unsuccessful season with Joe.”

But what makes Longo so special isn’t just the time he puts in, but the manner in which he does it. He isn’t there to simply say he’s part of a coaching staff or to drink beer afterwards. He’s there to teach. He’s there for the kids and there isn’t anything he wouldn’t do for them.

“He’s just a pleasure to be around,” said Girardi. “He’s fantastic with the kids and the one-on-one time he puts in with my son (Carter), well, you couldn’t ask for a better guy.”

Ask Longo why he’s coached for so many years, and you’re met with a pause. He thinks about the question, almost as though it’s an odd one, and then delivers his answer.

“They make me laugh,“ he said of the kids. “They make me feel young and there’s so many different characters. There are nights when it’s bad outside, but you know what, you just do it. We’re used to these winters. Tonight there’s a lot of snow, but if there’s a hockey game to be played, we’re going. Most of the time the rink never shuts down.”

A retiree from the steel plant, Longo first got into coaching in his 20s as a way to kill time in the winter. He eventually coached all three of his boys — Emile, Ryan and Kelin — and has probably mentored more than 600 kids over the last four decades.

He has too many fond memories to recount, but he admits that as time has passed, he’s constantly reminded of the hands of Father Time whenever he runs into his former players.

“The first group we coached was born in 1967 so they’re in their 50s now,” said Longo. “I see the kids, 50 years old now, they come up to me and I sometimes have to ask ‘who are you’ and once they tell me their names, I can tell stories about them.

“The kids you coached, you see them years later and they’ve got gray hair or they’re bald like I am. It’s crazy how time flies.”

This year, Longo is once again an assistant coach to Bouchard in the Soo Pee Wee Major house-league division. He is busy in practices working with the defence or one-on-one with a player who needs help. He is there for the kids, to do whatever it takes to enhance their experience and make the game of hockey fun and hopefully a lifetime hobby.

“If any kid needs extra time, Joe’s the guy,” said Girardi. “You sit back and, not to sound clichéd, but he’s kind of like the Walter Gretzky of Sault Ste. Marie. His passion and love for the game is so high, to me, he’s a modern day Mike Zuke. He’s coached so many kids that have gone on to the OHL, NHL and overseas.

“The man fought and beat cancer three or four times and you know what? He never missed a year. That says a lot.”

For Longo, hockey and athletics is one way to teach kids the benefit of hard work. He pushes them hard. He demands discipline and work ethic. He wants kids to understand the concept of teamwork and camaraderie.

“You want to push them because nothing comes easy in life,” Longo said. “Anything you do requires hard work. I believe in team bonding and motivation is a big thing with me.

“I’m just trying to keep the kids loving the game and playing it through past their teens. You hate watching some kids play a few years and quit.”

After all, quitting is not in Joe Longo’s vocabulary. He has been a dedicated volunteer and one has to think that as long as he can get to the rink, there will always be a place for him behind the bench.