TORONTO — Ontario has deployed an emergency management team to Windsor-Essex to help deal with a large COVID-19 outbreak on a farm, Premier Doug Ford said Friday as he apologized for previously suggesting migrant workers were hiding to avoid getting
Jul 3, 2020 5:03 PM By: Canadian Press 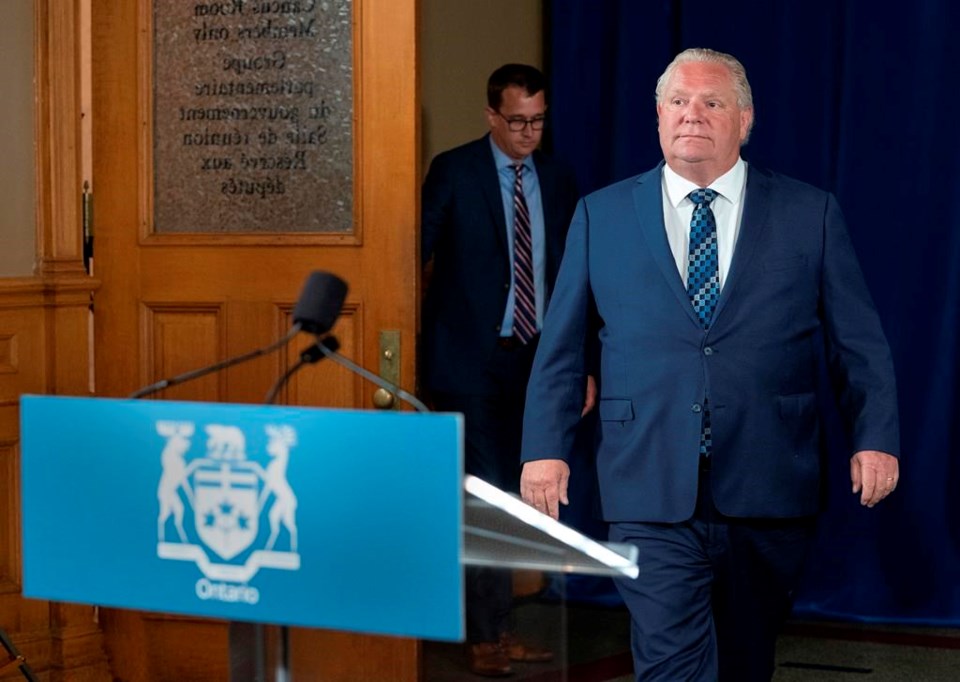 TORONTO — Ontario has deployed an emergency management team to Windsor-Essex to help deal with a large COVID-19 outbreak on a farm, Premier Doug Ford said Friday as he apologized for previously suggesting migrant workers were hiding to avoid getting tested for the novel coronavirus.

Ford said the team from Emergency Management Ontario would co-ordinate care and housing for 191 agri-food workers who have tested positive for COVID-19 at a local farm he has refused to name.

He said the agency was also working with the Canadian Red Cross, farmers, and local health officials to help infected workers self-isolate.

"We're going to get over this, we're going to get it resolved because everyone's working together," he said. "It's no one's fault. It's this COVID-19, it came in there and we're locking it down."

Farms in Windsor-Essex have been hard-hit by COVID-19 with four currently in outbreak. Hundreds of migrant workers have tested positive for the virus, and three have died.

Leamington and Kingsville are the only communities in Ontario that remain in lockdown due to the farm outbreaks.

The deployment of emergency management staff comes after the region's medical officer of health ordered a work stoppage at the unidentified greenhouse in outbreak — a decision Ford questioned on Thursday.

But Dr. Wajid Ahmed said Friday he could issue additional orders if there was further risk to workers on local farms.

"The evidence in this particular farm pointed to the fact that there is an ongoing risk," he said. "And that risk needs to be mitigated and controlled to protect the workers ... and it may happen again, if there is any risk, and I don't think that anyone would disagree."

Ford expressed concern on Thursday that the work stoppage order would not encourage local farmers to participate in efforts to combat the virus.

Ahmed said he did not take Ford's comments as criticism of his policy.

"I think both the premier and myself, we are on the same page in ensuring that the safety and well-being of the workers is the most top priority for all of us," he said.

A spokesman for Ontario Greenhouse Vegetable Growers said the work stoppage at the affected farm had escalated fears about testing and contributed to anxiety among both farmers and workers.

"It will take the concerted efforts of the sector, and most critically government, to build trust with agri-food sector that they will be supported both at the individual employee and farm business level if employees are required to isolate," said Justine Taylor.

Ford also apologized Friday for comments he made the previous day about migrant workers at the affected farm who he said "hid" when health officials showed up for COVID-19 testing.

The premier blamed his comments on "misinformation" he had been supplied by sources that he did not name.

"You know, this is moving at rapid fire," Ford said of the situation in Windsor-Essex. "I know there is information that came out the other day about people not getting tested and everything, I apologize (for the) misinformation."

NDP legislator Taras Natyshak, who represents a riding in Essex County, disputed Ford's comments about the migrant workers and invited the premier on Friday to tour the farms in the region and meet with some migrant workers.

"He needs to come down and see what's happening with his own eyes," Natyshak said. "And also, don't comment unless you have accurate information."

Meanwhile, the province announced Friday that Canadian Forces personnel who were deployed to some of Ontario's hardest-hit long-term care homes are leaving the facilities.

The soldiers were deployed to seven homes in April after the province requested their help from the federal government.

A report from the soldiers in May highlighted shocking conditions in some of the homes, with allegations such as rooming COVID-19 positive patients with uninfected ones, insect infestations and aggressive resident feeding that led to choking.

Ford praised the work of the Canadian Forces members, saying "they have been there for their fellow Canadians when we needed them most."

The government said inspections at all of the military-supported homes have been completed and provincial inspectors remain on site.

The total number of cases now stands at 35,535, which includes 30,909 marked as resolved and 2,682 deaths. The province reported more than 24,194 tests had been completed during the previous 24 hours.