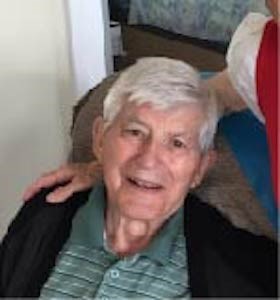 On April 10, 2021, in his 93rd year, our beloved father, opa, father-in-law, brother, uncle and friend passed away peacefully with family by his side.  Survived by the true love of his life Anni.  Father of Karl (Joyanne), Sonja Christopherson and Diana Donnelly (T.J.).  Opa to Elliot (Amanda), Peter (Kate), Kayla, Brian and Madison.  Great-opa to Piper and Clementine.  He is also survived by his sisters Anni Rebek, Erika Dahlmann and Lotte Steube and will be in heaven with his brother Tony (Helga) and Theresa Kutschera (Fritz).  He was a much loved “Onkel Willi” to many nieces and nephews in Canada and in Austria.

Willi met Anni in Austria and they married in 1951.  Born a day apart, Willi relished telling the world he married an ‘older’ woman. After the ceremony, he travelled to Canada to build a better life for his new bride and family to come. He settled in Sault Ste. Marie and Anni joined him shortly after. They recently celebrated 70 years of marriage on April 1, 2021.

Willi was a hard worker and sacrificed a lot to take care of his growing family. Along the way, he built strong friendships with his larger than life personality and sense of humour. He drew people to him from all walks of life, and took great pride in being a member in good standing of the Empire Hotel Beer Club. He loved fishing trips to Jarvis, mushroom picking in the summer and blueberry picking in the fall. He understood the importance of a stable, loving, family and was often heard saying “to me, family is everything”. He proved it by whipping up a mean schterz to anyone who happened by for breakfast.

He worked for the City of Sault Ste. Marie for over 30 years in the arenas division where he could often be seen driving the zamboni between periods. He was fanatical when it came to watching hockey of any level! He loved spending winters in Arizona and made the trek to Yuma 15 years in a row. Visitors were always treated to the sweet taste of a Date Shake, walks through the desert and the odd trip to Vegas. Nothing made his heart sing more though than his beloved Sunny Island, the camp he restored—and loved, on Upper Island Lake. His passion for life will be sorely missed.

In view of COVID-19, and at Willi’s request, a family celebration will be held for him when it’s possible.  In lieu of flowers, donations may be made to the Collingwood General and Marine Hospital Foundation.  Arrangements entrusted to Chatterson Funeral Home, Collingwood.

MUHONEN, Aimo
We miss you everyday and know that you are with us in some small way. 13 years ...

GOULET, Nancy (nee Andrews)
In Loving Memory of our Beautiful Mother, who passed away 4 years ago on May ...