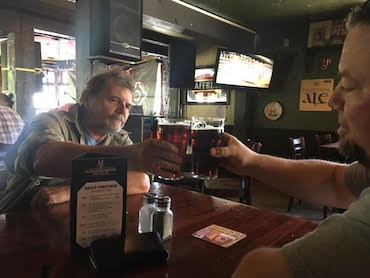 In the comfort of his home our beloved Father passed away peacefully on December 14, 2019 to be rejoined with his loving wife, Bernice Anne Folkard.

Born in 1954 in Hamilton, Ontario our Father was much adored by his children Kevin Clifford John Folkard (Linda) and Jenny Teresa Pearl Folkard (Colin). He will be fondly remembered by his grandchildren Aidan, Anakin and Amelia who cherished their Grandfather, “Gump”. He is survived by his sister Nancy Maybrey (John) and Nephew Ryan Maybrey (Kristine) as well as his great nieces Alexa and Brooke. He was predeceased by his beloved wife Bernice Anne Folkard and his parents Clifford and Mima Folkard. Our Father will be dearly missed by all his family and friends.

Those who came to know our Dad will recall his incredible sense of humor, charisma, lust for adventure and his passion for his many hobbies and interests. Our father had a keen ability to strike up a conversation with anyone who crossed his path and he would help, to the best of his ability, those in need.

Our father grew up in Burlington Ontario and once he finished school, he joined the Canadian Military, PPCLI Regiment and moved to Calgary AB where he became a father and then retired. With his newly created family, he returned to Ontario where he became a father a second time. He worked as a Steel worker at Stelco Steel until a forced early retirement. Dad took up sailing and sailed throughout the Great Lakes before settling with his wife Bernice in the Algoma District. There he became an avid hunter, outdoorsman and long-distance marksman. Our father was incredibly artistic and his creativity was evident through his modeling, comic strips and many other art mediums.

A celebration of our Father’s life will be held at a later date.