TSN president weighs in on the network, competition and sports media landscape 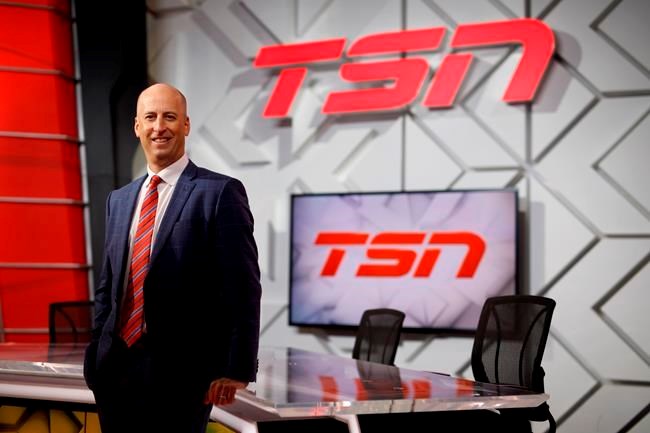 TORONTO — Ask TSN president Stewart Johnston about his start at the network and he'll fire off specifics like it was yesterday.

"It was Feb. 10, 1997. I wore a full suit because I didn't know what to do. It was a little embarrassing because I was so over-dressed relative to everybody who worked there," he said with a laugh. "As the junior intern coming in, I wanted to make a good impression.

"I stopped (wearing the suit) after one day. I was eyes wide open, certainly a little intimidated but ecstatic at the same time."

A suit is a mainstay now as Johnston approaches a full decade in his current position and over 22 years with the company. The Ottawa native also oversees Bell Media's national advertising sales and in-house creative agency.

A self-described 'sports junkie' as a youngster, Johnston followed his favourite sports by watching local sportscasts and reading magazines and newspapers.

"In 1984, TSN launches and it was a life-changer for me," he said. "My parents weren't too thrilled with how much time I was spending on the couch."

He focused on business studies after high school and completed an honours degree at Queen's University before trying his luck at TSN.

"I came to TSN and banged on the human resources door and said, 'I will do anything, please let me in.'" Johnston said. "They gave me really a glorified intern job, maybe one of the most junior in the company. That was 1997 and it was magical to me. I loved every second of it."

He handled junior network scheduling in those early days, essentially taking content and mapping it out into a 24-hour schedule.

"I was just happy to be there and almost a little nervous, (thinking) that this can't last," he said. "It's too good to be true. It's been a lot of hard work and a lot of really lucky breaks. It's been a good run since then."

Johnston, who worked his way up via the programming side, now guides the network's television, radio and digital offerings from the CTV/TSN north campus headquarters.

His office is loaded with television screens and sports memorabilia. His booming pipes would make him a natural on radio if he ever decided to get on the mic.

"If there's one thing that I want to make sure I'm focused on, it's managing the TSN brand," he said.

The network's plums include the CFL, NFL, Grand Slam tennis, Hockey Canada events, Season of Champions curling, golf majors and soccer's World Cup. There are some NBA and MLB offerings as well along with auto racing, UFC, MLS, NCAA March Madness and other sports.

One of the biggest challenges of Johnston's tenure was when rival Sportsnet landed a 12-year, $5.23-billion media rights agreement with the NHL in 2013.

Hockey, of course, is king in Canada and while TSN still has some regional NHL broadcast rights, the deal was seismic in nature.

"What we decided to do was build our entire programming schedule, our marketing messaging, our entire strategy around games of consequence," Johnston said. "Breadth and depth of content that delivers iconic moments."

TSN did score monster ratings with a couple generational moments this year with the Toronto Raptors' Game 6 victory over Golden State to win the NBA Finals (Sportsnet and TSN split the Raptors' schedule with their parent companies co-majority owners of the team). That was followed a few months later by Bianca Andreescu's stunning run to a U.S. Open title and final victory over Serena Williams.

While both TSN and Sportsnet have had highs and lows on the ratings front, recent talk about their long-running rivalry always seems to shift back to the NHL deal.

Rogers executives have professed their love for the agreement, which has come at a time when Canadian teams have struggled to go deep in the playoffs. Critics have called the deal an albatross that has led to sweeping job cuts.

Looking back at that time, Johnston said communication was key at TSN. Staff members were told of the network's new strategy and future plans. On-air talent was re-signed and advised that hockey would be an "absolute mainstay" of the schedule going forward.

"After we got word of the change in the NHL rights, we launched three new feeds to make five TSN feeds," Johnston said during a sitdown interview. "That was within nine months. That all happened very quickly with an incredible amount of effort and creativity from the team here at TSN.

"What that told the world is we weren't shrinking, we were expanding and we were going to be aggressive. That was the first step in that new strategy."

Both networks feel they're on top and frame their messaging accordingly. Sportsnet calls itself Canada's No. 1 sports media brand while TSN calls itself Canada's sports leader. News releases from both sides pump the tires on ratings, video starts on digital platforms and engagement on official social media accounts.

"I'd say that what hasn't changed is how competitive the team at TSN is from a frame of mind," Johnston said. "We want to win. No matter who's in front of us, we want to make sure that we come out on top and that we stay No. 1 and that we're considered as the leading voice in sports in this country."

Other competitors have joined the fray in recent years. Twitter and YouTube have dabbled in sports broadcasting and DAZN Canada is in the domestic mix now too.

"Competition is fierce," Johnston said. "It was fierce 10 years ago and it's fierce again today. We have different players that we deal with but we feel very confident in our roster of sports.

"We have a lot of long-term contracts with key properties that make us feel very good about the future of TSN."

Emergency goalie David Ayres helps Hurricanes pick up improbable win over Leafs
Feb 23, 2020 2:02 AM
Comments
We welcome your feedback and encourage you to share your thoughts on this story. We ask that you be respectful of others and their points of view, refrain from personal attacks and stay on topic. To learn about our commenting policies and how we moderate, please read our Community Guidelines.