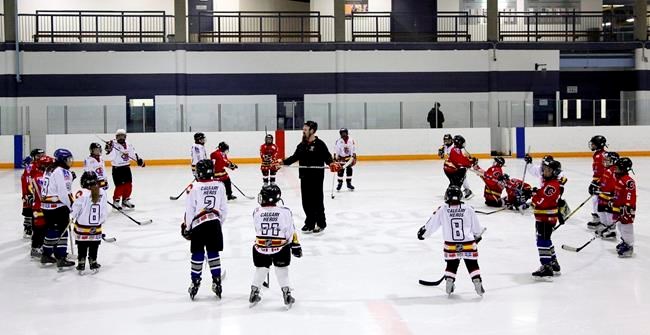 Canada Soccer, Curling Canada, Hockey Canada, Rugby Canada, Skate Canada and Tennis Canada have joined forces in asking the federal government for a $75-million sport recovery program to support local and grassroots initiatives for all sports reeling from the pandemic.

"A partnership between the government of Canada and eligible NSOs (national sports organizations) will ensure the grassroots sport development programs that our organizations operate can be sustained when the safe return to sport is permitted," the coalition said in a statement.

With the federal budget set for April 19, the governing bodies are hoping for some positive news — although many hands are being extended due to the ravages of COVID-19.

"We believe they're hearing us," said Peter Montopoli, general secretary of the Canadian Soccer Association.

Montopoli says the money would be used "for the development of sport … to ensure we continue to invest in sport at the community level."

Rugby Canada CEO Allen Vansen echoes that the focus will be on the grassroots.

"It really is about how do we get sport re-activated in Canada," he said. "It's not about necessarily supporting our national team activities or events of that nature. We're going to do hat we have to do to make those programs work.

"It's really about getting our registered participants back playing the game and getting more and more Canadians playing sport and active in sport again. And I think as a society and certainly as sport organizations we see that as a considerable risk for the Canadian society moving forward."

Speaking for his sport, Montopoli says registration across the country for soccer was down approximately 80 per cent in 2020.

"That's had a significant impact on our sport but more importantly (on) the communities," he said.

"Basically no registration means no activity and no activity means no programming," he added. "And we're trying to reverse that. And we just want to be ready when the country's ready, as sport we wish to be ready. That's the idea behind this proposal."

Canada Soccer does not know whether the national men's team will be able to play home matches. Its first home World Cup qualifying game last month was played in Orlando due to pandemic-related restrictions.

More questions remain about the future, making it hard to plan ahead.

"It's fair to say it'll take us a couple of years to come back as a sport to the levels that might had ben pre-COVID. And this (proposal) helps us support through that bridge and through that gap," said Montopoli,

The ripple effect from the pandemic has been felt from governing bodies all the way down to local clubs, added Montopoli, who notes that sport tourism is a $6.8-billion industry in Canada.

Clubs and players not only provide registration fees that fuel national organization but boost local economies via tournaments and other events.

"We want to make sure that when we come out of COVID, whenever that is, that industry is thriving and still ready to go to support our country," Montopoli said.

The six groups say collectively they had more than 100 events in 2020 cancelled or "at risk."

The groups propose that sports organizations be able to apply to fund sport development and sport participation programs "based off demonstrated lost revenues from cancelled events/operations dating back to March 2020."

This program would be accessible to other national sports organizations, "provided they can demonstrate that cancelled events or operations due to COVID-19 public health restrictions has resulted in substantial lost revenues that are relied on to fund grassroots sport programming."

The six organizations leading the way acknowledge that each is different and has been impacted in different ways. But all six rely predominantly on events, registration and commercial operations to fund sport participation programs.

Montopoli says the associations have had ongoing discussion with the federal government for about a year. They have also launched a letter-writing camp to Ottawa via the website www.sporthelps.ca.