TORONTO — For nearly four minutes the Toronto Raptors offence revolved around rookie Terence Davis. He made the most of the opportunity.
Nov 18, 2019 11:37 PM By: Canadian Press 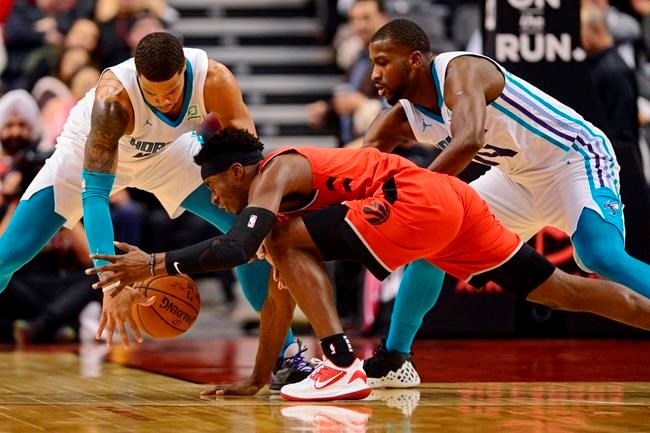 TORONTO — For nearly four minutes the Toronto Raptors offence revolved around rookie Terence Davis. He made the most of the opportunity.

The 22-year-old guard scored a career-best 16 points in the fourth quarter of Toronto's 132-96 blowout of the visiting Charlotte Hornets on Monday night. It was just the 13th game of his NBA career, and all of his points came with the Raptors nursing a healthy lead.

Davis drained a three-pointer with 9:01 left to play in the game, giving Toronto a 105-78 lead with his first points of the night.

After Raptors forward Chris Boucher tipped the ball in and Charlotte's Miles Bridges had a three-pointer, Davis stole the ball and sank another three-pointer to make it 110-81. The Hornets turned over the ball again on the next possession, with Pascal Siakam finding Davis beyond the arc, for the rookie's third three-pointer of the game.

According to Davis, he could have scored even more.

"I turned down one over the top of the key from Pascal. He told me to shoot it, but I didn't," said Davis. "Then Matt Thomas told me to shoot one as well. I just took what the game gave me."

Davis sank two free throws with 6:22 remaining for a 115-81 Raptors lead, then on Toronto's next possession threw down an emphatic dunk, to the delight of the sold-out crowd of 19,800 at Scotiabank Arena.

He again showed his range with 5:20 left in the game, making his fourth three-pointer for 16 points and a 120-82 Raptors lead.

"I think explosive is a word that suits him, he's an explosive athlete," said Toronto head coach Nick Nurse. "My favourite thing about him is the way he vaults up to shoot.

"He is a good shooter, a deep shooter, he's got a strong body, strong legs, he's not afraid to take shots, and he can be explosive like that."

Davis has seen his minutes increase since all-star point guard Kyle Lowry was sidelined with a broken thumb on Nov. 9 against New Orleans. He averaged 7.6 minutes per game in October but is now up to 16 per contest this month.

Nurse sees Davis as a combo guard for now but recognizes that he's got the potential to play at the point, should the Raptors need him.

Davis credits Toronto's player development department and coaches with helping him improve in a relatively short period of time. Getting more playing time has helped him too.

"Confidence is a big thing. I'd say that with any player: If you've got confidence, you're feeling good, you're feeling comfortable. I'd definitely say yes," said Davis. "Playing more minutes, knowing I'll actually play and just being ready when my time comes. That's what's got me that confidence."

This report by The Canadian Press was first published Nov. 18, 2019.