ST. LOUIS — Alex Pietrangelo is off to an outstanding start. Same for the St. Louis Blues. Pietrangelo scored twice, Brayden Schenn had four assists and the Blues beat the Toronto Maple Leafs 6-4 on Saturday night.
0
Nov 5, 2017 12:19 AM By: Canadian Press 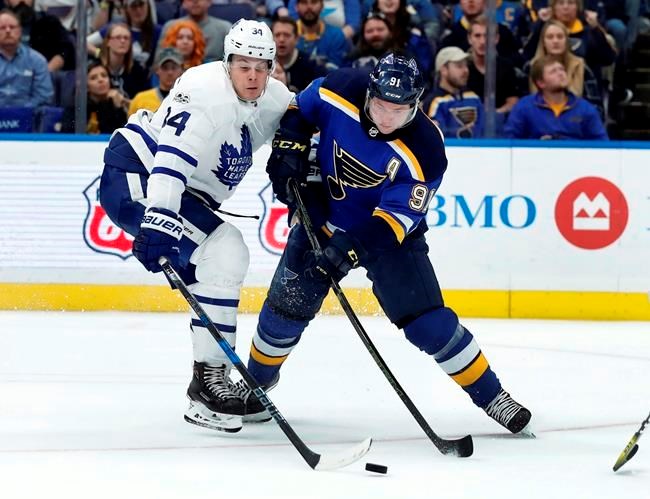 ST. LOUIS — Alex Pietrangelo is off to an outstanding start. Same for the St. Louis Blues.

Vladimir Tarasenko, Joel Edmundson, Magnus Paajarvi and Vladimir Sobotka also scored for the Blues, who improved to 6-1 at home. Jaden Schwartz had three assists, and Jake Allen made 26 saves.

Edmundson and Pietrangelo gave St. Louis a league-best 17 goals from this season.

"Even the nights when we don't score on the back end, we're getting chances, we're getting a lot of shots," Pietrangelo said. "The forwards are doing a really good job of protecting us when we do go down and we're kind of just rotating those five guys and when you do that you're going to get opportunities all over the ice."

"He's unbelievable defensively," said Schenn, who notched his first career four-point game. "Good stick. He plays against the top forward every night. I really believe, he's playing in St. Louis here, maybe it's not a name market as far as coverage as some of the Canadian teams get, but he could be in the running quietly for Norris Trophy."

The Blues have earned points in six of their last seven home games against Toronto (5-1-1).

Tyler Bozak scored twice, Andreas Borgman had a goal and an assist and Connor Brown also scored for the Maple Leafs, who lost for the fifth time in six games. Frederik Andersen made 27 saves.

Andersen "was keeping us in that game and once we give up those opportunities that we did, I don't think any goalie in the league is going to save a lot of them," Bozak said.

The Blues (11-3-1), who won their third straight against Toronto, scored three times in the second period to erase a 1-0 deficit.

Tarasenko tied it at 2:33, chipping a Schwartz rebound into the net to score for the sixth straight game against Toronto. The goal ended the Blues' season-long scoring drought of 83:38.

Edmundson gave the Blues a 2-1 lead after a Schenn shot went off of Andersen's pad right onto his tape at 7:10.

Pietrangelo showed off his hands while making it 3-1 at 10:28, skating past the outstretched left pad of Andersen and tucking the puck into the net with a quick backhand-forehand combination.

Pietrangelo said he scored a goal like that before — while playing a video game as a kid.

"I looked up and he's a big goalie so he kind of took up the whole net and then when I pushed around he came out pretty far so I didn't really have much of a choice but to try and jam it in there," Pietrangelo said.

Borgman put the Maple Leafs up midway through the first period. It was just the fifth first-period goal allowed by St. Louis in 15 games.

"To me you got to have 20 guys on deck and ready to go and we didn't have that tonight," Maple Leafs coach Mike Babcock said.

Paajarvi, Bozak and Sobotka scored in a 62-second span early in the third period. Paul Stastny's forecheck caused a turnover behind the Toronto net that directly led to Sobotka's tally.

Pietrangelo scored a power-play goal at 7:52 to make it 6-2. Tarasenko assisted on the goal, giving him 300 career points.