Pacquiao backs call for WBO review of his loss to Horn

MANILA, Philippines — Manny Pacquiao asked the WBO to act on a request by Philippine sports officials for a review of his welterweight world title loss to Jeff Horn, saying he didn't want to see the boxing industry "dying because of unfair decision a
0
Jul 5, 2017 2:39 AM By: Canadian Press 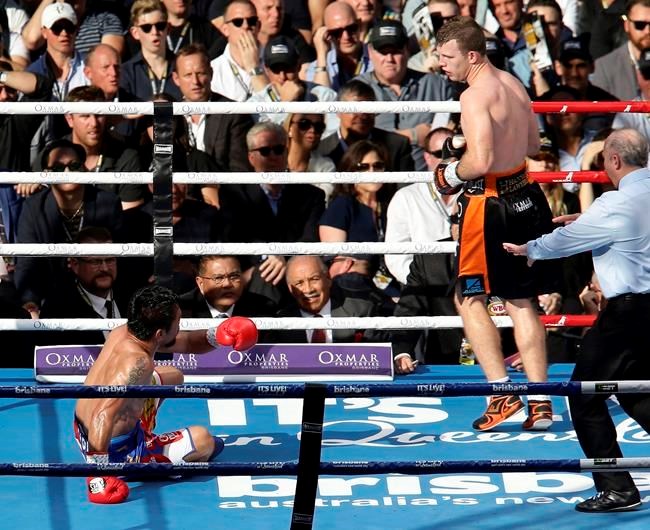 MANILA, Philippines — Manny Pacquiao asked the WBO to act on a request by Philippine sports officials for a review of his welterweight world title loss to Jeff Horn, saying he didn't want to see the boxing industry "dying because of unfair decision and officiating."

While Pacquiao has accepted his defeat to Horn, who fought in his first world title bout in Sunday's so-called "Battle of Brisbane," the Philippine senator said in a statement Wednesday he had a "moral obligation to uphold sportsmanship, truth and fairness."

The 11-time world champion cited a request by the Philippines' Games and Amusements Board, or GAB, to World Boxing Organization President Francisco Valcarcel for a thorough review of the refereeing and judging of the bout, which was staged outdoors in front of more than 51,000 fans at Suncorp Stadium.

The WBO should take action on the Philippine request "so as not to erode the people's interest in boxing," Pacquiao said. "I had already accepted the decision but as a leader and, at the same time, fighter, I have the moral obligation to uphold sportsmanship, truth and fairness in the eyes of the public."

"I love boxing and I don't want to see it dying because of unfair decision and officiating," he said.

In their July 3 letter to Valcarcel, GAB chairman Abraham Kahlil Mitra and two other officials expressed concerns about " the possible errors of the referee and the three judges who officiated the subject fight."

"We ... request for a thorough review by the WBO for possible miscalls of the referee where some deductions were not made and of the judges in their judging that have caused varying opinions on their objectivity," the statement said.

Pacquiao's trainers were critical of the referee for not doing more to stop or penalize head clashes and neck holds. They highlighted statistics that showed Pacquiao, who needed stitches to two cuts in his hairline that resulted from head clashes, landed twice as many punches.

Commentators from ESPN, which broadcast the fight live in the U.S., were among the most vocal critics of the outcome.

All three judges awarded it to Horn, with American Waleska Roldan's 117-111 score attracting most of the criticism. U.S. judge Chris Flores and Ramon Cerdan of Argentina each scored it much closer at 115-113.

Top Rank promotor Bob Arum said it was a "close fight. It could have gone either way."

Pacquiao had a rematch clause in the contract, meaning the 38-year-old Filipino could negotiate to fight Horn again before the end of the year.

Horn won the majority of the early rounds on all judge's cards, but Pacquaio rallied and had opportunities to end the fight in the 9th when he had the Australian schoolteacher wobbling and on the ropes. Horn recovered and won the next round, setting up a battle of attrition in the two closing rounds.

The WBO published a photo of the judge's cards on its Twitter account on Sunday night, and followed up on the GAB request for an inquest with another post on Wednesday that said: "The discretion of a referee or judge cannot be reversed, except in a case of fraud or violation of laws which is not the case in Pac vs Horn."

Pacquiao entered the fight with a record of 59-6-2, but the last of his 38 wins by knockout was in 2009. Horn hadn't lost any of his previous 17 professional fights, but had never encountered anybody with Pacquiao's credentials.

Philippine officials organized a free public viewing of the bout in southern Marawi city, to give thousands of displaced residents, troops and police a respite from a disastrous siege by Islamic militants that has turned parts of the city into a war zone.

The Filipinos cheered for their boxing hero, but fell silent when the decision was announced. Marawi crisis committee spokesman Zia Alonto Adiong said then that many could not accept the outcome but he added that the momentary entertainment was a relief and that Pacquiao provided a crucial message of courage and resiliency to the war-weary residents and troops.