SAN FRANCISCO — German Marquez pitched a one-hitter, nicked only by Evan Longoria's single with one out in the eighth inning, and the Colorado Rockies ended an eight-game losing streak by beating the San Francisco Giants 4-0 Sunday.
0
Apr 14, 2019 11:41 PM By: Canadian Press 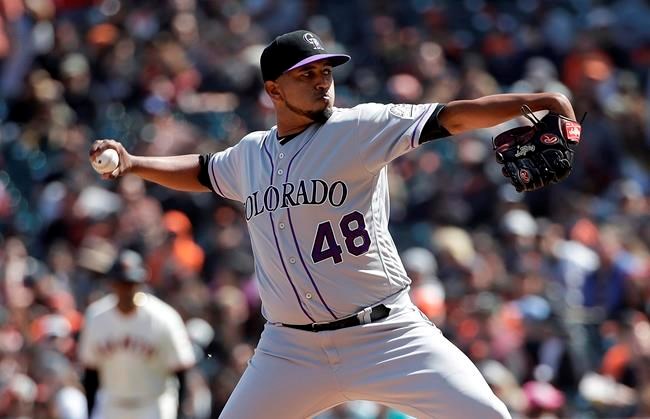 SAN FRANCISCO — German Marquez pitched a one-hitter, nicked only by Evan Longoria's single with one out in the eighth inning, and the Colorado Rockies ended an eight-game losing streak by beating the San Francisco Giants 4-0 Sunday.

Marquez (2-1) struck out nine and walked none while throwing 105 pitches in the first complete game in the majors this season. It was the first-ever complete game for Marquez in 156 pro starts, including 69 in the big leagues.

Marquez had allowed just one runner, hitting Kevin Pillar with a pitch to begin the sixth inning, and was in complete control heading into the eighth. Brandon Crawford opened the eighth with a hard, one-hopper that deflected off third baseman Nolan Arenado's glove. Arenado quickly grabbed the ball out of the air and zipped a throw to retire Crawford.

Longoria followed with a grounder in the hole, just beyond Arenado's dive. The Gold Glover took off his mitt and slammed it to the ground, shouting in frustration that the no-hit bid had been broken up.

Arenado hit a three-run homer, his first this season. The four-time Silver Slugger entered the day batting .246 with six RBIs.

Boston's big starting foursome of Price, Chris Sale, Rick Porcello and Nathan Eovaldi entered Sunday 0-7 with an 8.43 ERA in 11 starts. Price (1-1) responded with clearly their best outing, mixing his mid-90s fastball with a sharp changeup and cutter to allow just three hits without issuing a walk.

Baltimore's Chris Davis went 0 for 4 with two strikeouts a day after ending his record 0-for-54 stretch.

Ryan Brasier escaped a jam in the eighth, and Matt Barnes worked the ninth, closing out the combined five-hitter.

John Means (1-2) gave up a run and four hits in five innings, striking out three and walking one in just his second big league start. He made his first career appearance in Fenway Park last Sept. 26, allowing five runs over 3 1/3 innings.

MIAMI (AP) — Jean Segura's two-run homer to left in the 14th inning put Philadelphia on top, and the Phillies beat Miami in the longest game of the young season for either team.

Wei-Yin Chen (0-1) came on to pitch the 14th, was charged with both runs and his ERA actually dipped from 24.75 to 23.40. Chen — the highest-paid Marlins player this season, making $20 million — has allowed 12 runs over three innings of relief in his last two appearances.

Miami batters struck out 18 times, tied for the fourth-most in franchise history. Victor Arano (1-0) pitched the 12th and 13th for Philadelphia, getting all six outs by strikeout. Jose Alvarez worked the 14th, gave up a leadoff single but finished out his first save.

The Dodgers avoided back-to-back sweeps, something they haven't had since 2017 when they last dropped seven games in a row.

Stripling (1-1) earned his first win in his fourth start of the season. The right-hander didn't record his first strikeout until the sixth inning and instead retired 14 of his first 17 batters on flyouts or grounders.

The Dodgers jumped on Jhoulys Chacin (2-2) in the first inning, taking a 2-0 lead on a two-out RBI single by Verdugo.

José Abreu nearly had a grand slam as well — to almost the same spot in the ballpark — but settled for a sacrifice fly when right fielder Aaron Judge made a jumping catch in front of the wall. Held to one hit Saturday in a 4-0 loss, Chicago chased Masahiro Tanaka (1-1) with nobody out in the fifth and won for only the second time in eight games.

Yoan Moncada had three hits and a walk for the White Sox (5-9), who stole five bases in the last five innings — several of them uncontested. Chicago won two of three to take consecutive series in the Bronx for the first time since 2002-03. Before last August, the White Sox hadn't captured a series at Yankee Stadium since 2005.

Rodón (2-2) allowed three hits in six innings and struck out five, improving to 3-0 in three starts at Yankee Stadium. Four relievers finished a four-hitter, with Alex Colomé getting three quick outs for his third save.

KANSAS CITY, Mo. (AP) — Pinch-runner extraordinaire Terrance Gore stole a base and then scored on Hunter Dozier's single in the ninth inning, lifting Kansas City over Cleveland to complete a three-game sweep of the AL Central .

Ryan O'Hearn led off the ninth with a walk against Brad Hand (0-1) and was replaced by Gore. The speedster swiped second and advanced to third on a throwing error by catcher Roberto Perez. Dozier then singled to left for Kansas City's first walk-off win of the season.

The Royals roughed up two-time Cy Young Award winner Corey Kluber, who allowed 11 of his 18 batters to reach base safely. He gave up six runs, six hits and a career-most five walks in just 2 2/3 innings. The five walks doubled Kluber's season total — he didn't walk more than three batters in any game in 2018.

Wily Peralta (1-1) pitched the top of the ninth.

Teheran gave up one run and six hits in six innings.

It was a second straight losing performance for deGrom, who has allowed five homers in his last two starts. The reigning NL Cy Young Award winner gave up 10 homers all of last season.

Markakis went deep in the second and Donaldson added another solo shot in the fifth as the Braves won for the fifth time in their last seven games. Charlie Culberson's two-run drive made it 5-1 in the sixth. It was Culberson's fifth career pinch-hit homer.

J.D. Davis' third homer gave the Mets a 1-0 lead in the second. New York got RBI singles by Amed Rosario and Keon Broxton in the eighth.

Cole (1-2) gave up two runs on four hits, including a leadoff home run to Mitch Haniger, and did not walk a batter. Cole has pitched at least six innings in each of his four starts.

Haniger's homer, his fifth, extended the Mariners' major league record streak of 18 games with a home run to start the season. Brandon Brennan (1-1) ended his season-opening scoreless streak at 11 1/3 innings.

Hector Rondon, Ryan Pressly and Roberto Osuna each pitched a perfect inning in relief for Houston, with Osuna working the ninth for his seventh save.

MONTERREY, Mexico (AP) — Marcell Ozuna hit two home runs and Matt Carpenter connected for a tiebreaking drive in the seventh inning that sent St. Louis over Cincinnati for a split of their two-game series in Mexico.

The Cardinals saluted the fans after the win and gave away their hats. The Houston Astros and Los Angeles Angels will play twice at this stadium in early May — Major League Baseball has committed to bring regular-season games to Mexico until 2021.

It was 4-all when Carpenter opened the seventh with his second home run of the season, tagging Amir Garrett (1-1). Ozuna hit a solo homer off Jared Hughes and Jose Martinez capped the five-run inning with a two-run single that made it 9-4. Jordan Hicks closed for this third save. John Gant (3-0) pitched a scoreless inning.

TORONTO (AP) — Pinch-hitter Guillermo Heredia homered to cap a five-run burst in the eighth inning and Tampa Bay beat Toronto for its fifth straight series victory to start the season.

Tampa Bay improved to 12-4 and matched the 2010 team for the best 16-game start in club history. The Blue Jays have lost seven of nine and haven't won a series this year.

Blue Jays reliever Thomas Pannone became the 89th different pitcher in big league history to strike out the side on nine pitches. He fanned a swinging Avisail Garcia, then got Brandon Lowe and Daniel Robertson looking in the fifth.

Adam Kolarek (1-0) pitched one inning for the victory. Marcus Stroman (0-3) allowed three runs, none earned, in four innings. He walked four and struck out five.

WASHINGTON (AP) — Rookie Jason Martin hit a tiebreaking double in the top of the ninth inning against Washington's shaky bullpen, then Felipe Vázquez escaped a bases-loaded jam Pittsburgh a win.

The Pirates took two of three and won a series at Nationals Park for the first time since 2013. Josh Bell drew a leadoff walk in the ninth from Wander Suero (1-1) and moved to second on Colin Moran's grounder. With two outs, Martin hit a ground-rule double to left for his second major league RBI.

The Nationals loaded the bases in the bottom half on a single, walk and Adam Eaton's bunt single with one out. Vázquez (1-0) struck out Howie Kendrick and retired Anthony Rendon on a flyball to end it.

MINNEAPOLIS (AP) — Jose Berrios (2-1) pitched into the seventh inning for his first win since opening day, Trevor Hildenberger struck out two with the bases loaded for his first save and Minnesota beat Detroit to complete a two-game sweep.

C.J. Cron homered and drove in three, and Eddie Rosario was a triple short of the cycle for the Twins, who have won three of four.

In his shortest outing of the season, Jordan Zimmermann (0-2) lasted three innings and allowed five runs and eight hits with one strikeout.

Jeffrey Springs (2-0) pitched a scoreless eighth, and José Leclerc struck out three in the ninth for his third save.

Joakim Soria (0-2) got one out in the eighth and was charged with four runs.

Greinke (2-1) allowed two runs and four hits with six strikeouts. He won despite surrendering his seventh and eighth home runs of the season. Ketel Marte and Christian Walker also homered for the Diamondbacks.