LONDON — The only member of the English Premier League's top six in action on Saturday, Liverpool took full advantage. Juergen Klopp's side won at West Ham 4-1 to secure successive league victories for the first time since August.
0
Nov 4, 2017 4:46 PM By: Canadian Press 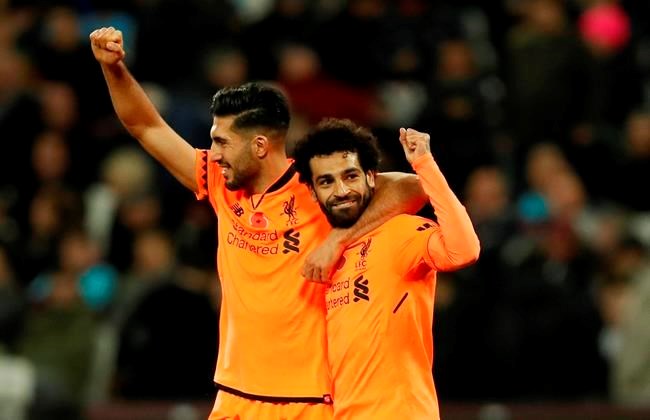 LONDON — The only member of the English Premier League's top six in action on Saturday, Liverpool took full advantage.

Juergen Klopp's side won at West Ham 4-1 to secure successive league victories for the first time since August.

Mohamed Salah scored twice, while Joel Matip and Alex Oxlade-Chamberlain also found the net as Liverpool made light work of West Ham at the Olympic Stadium.

"Two weeks ago I felt quite different. We knew after that game at Tottenham (4-1 defeat) that we were bad," Klopp said. "We wanted to strike back and the boys did with three really nice results."

After an embarrassing 3-0 loss to Brighton in its last home league game, West Ham's display did little to relieve the increasing pressure on manager Slaven Bilic.

"I definitely don't feel a broken man. I'm very, very strong," Bilic said. "On the other hand, the situation for West Ham is not good."

The Hammers dropped to 17th, with just a point separating them from the relegation zone.

Here's a look at the action:

Almost as important as the victory for Liverpool, was the return of Sadio Mane.

The Senegal winger missed the last five games after injuring a hamstring on international duty.

Mane didn't score, but coming through 77 minutes unscathed with assists for both of Salah's goals vindicated Klopp's decision to start him.

"(Playing) Sadio Mane from the beginning after his injury, after yesterday his second session with the team. I never did it before," Klopp said. "Sadio is a naturally fit player, a little machine."

The first set-up came as Mane and Salah performed a two-man counterattack, with the latter putting the ball in the net just 13 seconds after West Ham took a corner at the other end.

The second was equally impressive as Mane beat two defenders before switching the ball to Salah, who arrowed his finish into the bottom corner.

Brighton and Huddersfield both won to move into the top half of the standings in their debut league seasons.

"Eighth has surpassed our expectation, most newly promoted teams would say the same, but we've got to be guarded against any type of complacency," Brighton manager Chris Hughton said.

Huddersfield held on for a 1-0 win over West Bromwich Albion despite playing the final third of the game with 10 men.

Christopher Schindler was sent off after receiving a second yellow card, but Rajiv van La Parra's first-half strike was enough.

The other promoted team, Newcastle, conceded a last-minute goal to Bournemouth in a 1-0 loss. Steve Cook's injury-time header left Rafael Benitez's side with just one win in its last six.

Another overachieving club is Burnley. Sam Vokes scored in the 80th minute to beat Southampton 1-0.

Everton is reportedly interested in hiring Sean Dyche away from Burnley after firing manager Ronald Koeman in October.

"I've had numerous times when I've been linked with situations and I just continue to see it clearly and that is to work hard at what I do," Dyche said.

"There's not a story there. My story is the Burnley story; five years here, another win today, which is a fantastic win, a clean sheet, Southampton away, a place that's been historically very, very tough for us to come and get results - both me as a manager and the club - and we've won 1-0, that's the story."

Earlier, Leicester stayed unbeaten under manager Claude Puel while twice wasting the lead in a 2-2 draw with Stoke.