TORONTO — A man who threw a beer can onto the field during a dramatic Blue Jays playoff game last fall was given a conditional discharge Wednesday, after his lawyer argued the public humiliation he suffered since being charged in the incident should
0
Jun 28, 2017 5:02 PM By: Canadian Press 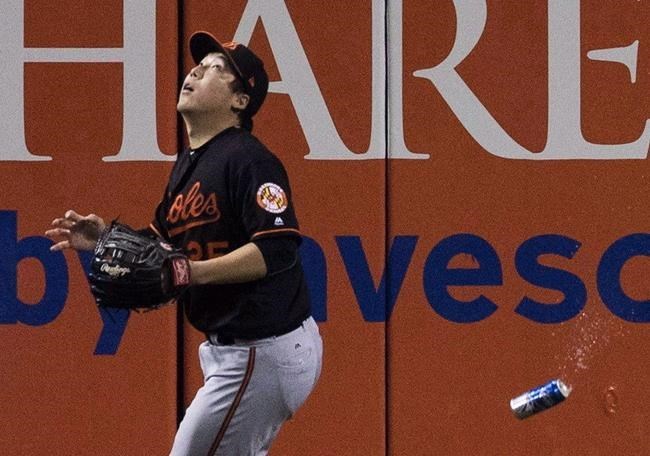 TORONTO — A man who threw a beer can onto the field during a dramatic Blue Jays playoff game last fall was given a conditional discharge Wednesday, after his lawyer argued the public humiliation he suffered since being charged in the incident should be taken into account.

Ken Pagan pleaded guilty to mischief last month, admitting he tossed a can of beer on the field last October as a Baltimore Orioles player was about to catch a fly ball during the seventh inning of the pivotal wild card game in Toronto.

The conditional discharge means Pagan avoids a conviction if he complies with certain conditions for a year, his lawyer said. Those conditions include 100 hours of community service, an order to stay away from the Rogers Centre, where the Blue Jays play, and a ban on attending all Major League Baseball games.

Before the discharge was granted, Pagan offered an apology in court to the Blue Jays, the Orioles, the player he nearly hit — Hyun Soo Kim — and to baseball fans in general.

"My emotions got the best of me in an exciting moment and my reaction is a deeply regrettable mistake, something I've been torn about since the moment it happened," he said. "I am fully aware of the disgrace I brought to the game."

Kim, who was in Toronto for a game against the Jays on Wednesday night, said though a translator that he received a personal apology from Pagan.

"I read it and I definitely accept his apology," Kim said. "People make mistakes so, you know, I'm sure it's not going to happen again."

Pagan's lawyer, Tyler Smith, argued that the public humiliation and intense media scrutiny his client experienced since the can tossing incident serve the court's requirement for a deterrent to prevent others from repeating such a crime.

"He no longer enjoys the relative anonymity that most of us do," said Smith. "He's become known ... as the beer can guy."

Pagan has become the butt of jokes and been subjected to online harassment, Smith added.

Court also heard that Pagan lost his job with Postmedia Network Inc. after the incident and has had to find other, less satisfying work, including delivering pizza.

"He's in counselling, he has significant anxiety issues. He's afraid that everyone he meets will know who is already and have formed an idea in their minds that he is a jerk," Smith said outside court. "He’s suffered with respect to the shame that he feels and the shame that he has brought on to his family and his friends."

Crown lawyer Rebecca Edward had argued that a conviction was a necessary deterrent in the case, but the judge presiding over the matter disagreed.

Justice Robert Bigelow said a conditional discharge would be sufficient.

"Not being able to follow the sports team he loves has had a significant impact on him," Bigelow added, noting that Pagan would have to continue to stay away from Jays games in Toronto for a year.

After the beer can toss last fall, police and stadium security immediately converged on the stands at the Rogers Centre in an effort to locate the person who threw the can, but were unable to identify a suspect.

The incident triggered a social media frenzy as many analysed photographs and video footage from the game to figure out where the can had come from.

After reviewing video surveillance, television footage of the event, as well as video and photographs taken by the public, Toronto police released an image of a suspect they described as an "unsportsmanlike fan.''

Pagan confirmed to The Canadian Press at the time that he was the person in the picture distributed by authorities and turned himself in on Oct. 6.

The tallboy toss also had repercussions for beer drinkers at the Rogers Centre, as the Jays announced they would not serve beer in cans for the rest of the post-season.