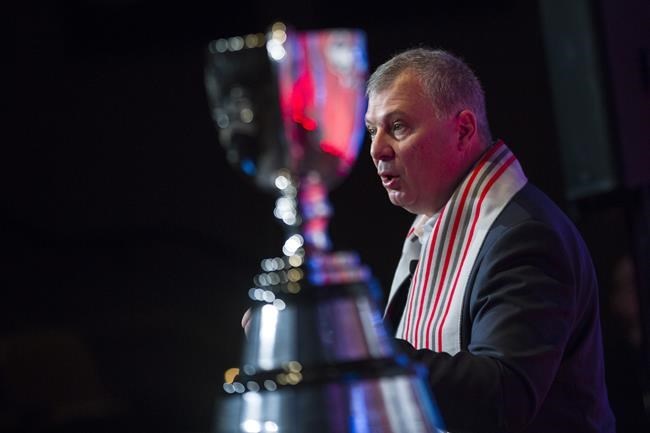 The CFL commissioner said Tuesday the league's innovation committee, which has CFLPA representation on it, has given its support to a league proposal to change its post-season format. Under the formula, the East and West Division first-place finishers would secure opening-round byes.

The next top four finishers, regardless of division, would claim the remaining four berths, with the third- and fourth-place clubs hosting the bottom two in semifinal action on a Saturday. The following day, the franchise with the best regular-season record would choose which opening-round winner it wanted to face in its conference final.

Ambrosie is presenting the idea, which he says is the brainchild of Winnipeg president Wade Miller, to fans during his annual cross-country trek. Ambrosie added the expectation is it will be presented to the league's board of governors March 17 for consideration and could be implemented by the CFL as early as this season.

But in a statement Wednesday, the CFLPA said no decisions have been made regarding the format revision, adding the proposal remains in the discussion stages. The concept will be on the agenda for discussion next week when players gather in Las Vegas for the union's annual general meeting.

"The CFLPA has three seats on the innovation committee and we discussed the playoff format proposal submitted by Wade Miller," the union said. "We agreed to further discussions on this proposal after we consider it with our executive and player representatives next week."

The CFL's current East-West playoff format has long been a bone of contention with fans, especially those in Western Canada who've grown tired of seeing Eastern squads with inferior records reaching the post-season.

In 1996, the CFL instituted the crossover rule. It stipulates a fourth-place team in one division that has more points than the third-place squad in the other crosses over to the other division at the end of the regular season and assume the No. 3 playoff seed.

Since the rule was adopted, all crossover teams have come from the West. Western clubs are 5-7 in East Division semifinal games but 0-5 in conference finals.

This report by the Canadian Press was first published Feb. 19, 2020.