While the CFL still faces challenges ahead of a potential 2021 season, commissioner Randy Ambrosie had reason for optimism Monday.
Nov 16, 2020 5:35 PM By: Canadian Press 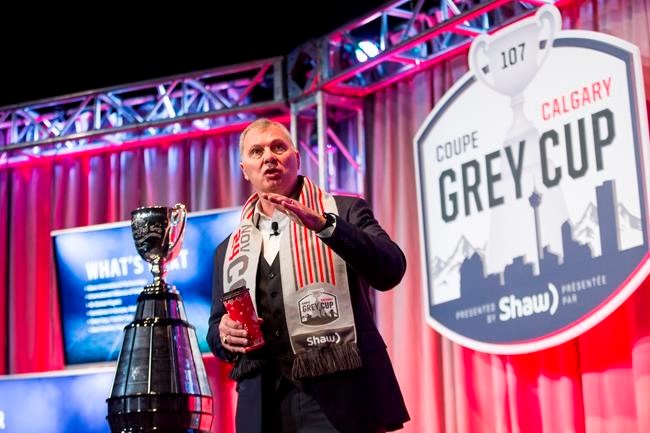 While the CFL still faces challenges ahead of a potential 2021 season, commissioner Randy Ambrosie had reason for optimism Monday.

Ambrosie spoke about the league's return to play next year during a fan state-of-the-league address that kicked off Grey Cup Unite, the league's virtual version of the presentation of events traditionally held during its annual championship week.

In August, the CFL cancelled its 2020 season due to the COVID-19 pandemic after failing to secure financial assistance from Ottawa. The league had hoped to play a shortened campaign in Winnipeg but had maintained it needed government funding to stage a shortened season.

Buoying Ambrosie's confidence was a report Monday that a second company, Moderna, was touting positive results for a potential COVID-19 vaccine. Last week, Pfizer Inc. suggested its vaccine appeared to be similarly effective.

"Honestly, you want to talk about a good omen for Grey Cup Unite," Ambrosie said. "It set the day on a much more optimistic foundation.

"It gives us all reason to believe that optimism is not misguided, that there are better days ahead . . . not just for all of society but better days for the CFL as well."

Ambrosie said the CFL could be in a position to release a 2021 schedule soon.

"In the not-too-distant future, CFL fans from coast to coast to coast will get a chance to pick their spots, mark their calendars and make sure they're going to be front-and-centre for CFL football in 2021," Ambrosie said. "Yes, we have to look after ourselves, we have to look after each other, we've got to get through this pandemic but I think there's a lot of reasons to feel good about 2021."

That includes staging the 2021 Grey Cup game in Hamilton, as scheduled. This year's CFL title contest was slated to be held in Regina but the Saskatchewan city will hold the 2022 championship.

Ambrosie's address was certainly long on optimism but short on specifics. But that's not a surprise considering the uncertainty surrounding the novel coronavirus, be it what the numbers will be like next summer or when a vaccine might be widely available.

There's also the status of the Canada/US border - which currently remains closed - and how that could impact American players coming north to play football. Also unclear is if the CFL does resume play whether fans will be allowed to return to stadium and if so, how many.

"We will plan for some scenario of less than full potential attendance," Ambrosie said. "It will, in my mind, be a critical element but exactly what that percentage will be, again, we'll be to a degree guided by our conversations with public health officials.

"We'll pick a percentage of capacity and that's where we're going to start. If we can have more, we'll have more and if we have to have less, then we'll have less.

"But to clearly fit into the category of reasonable, rational and credible, there's going to have to be some notation that we may not be able to have 100 per cent of fan capacity but I still believe we're going to come up with a scenario everyone will rally around and be something that gets us back on to the field in '21."

The 2021 season will be the final one included under the current collective bargaining agreement between the CFL and CFL Players' Association. While it will have to be agreed upon by both sides, Ambrosie said a pandemic clause could be included in a future CBA.

"I think it's safe to say that the pandemic is going to readily change the way businesses write contracts," Ambosie said. "I think we're going to see pandemic clauses inserted into regular everyday contracts.

"I think it's certainly something that we'll have to talk to the players about. I think the most important thing we can do now is how do we shape the future together? How do we create an alignment of interest? How do we make sure that we're all rowing together so that ultimately the league is getting stronger, that our foundation is strengthened."

Ambrosie said where there's common ground, though, is all parties wanting football to return in 2021.

"In all of my discussions . . . I think everyone wants to play," he said. "We want to get back on the field and we know how important it is.

"The message we want to send (Monday) is we got knocked down but like great football players we're going to get right back up and get right back into the huddle and look forward to the next play. This (2020) wasn't great for us and for the world but we're focused on the future in a very positive way."

This report by The Canadian Press was first published Nov. 16, 2020.