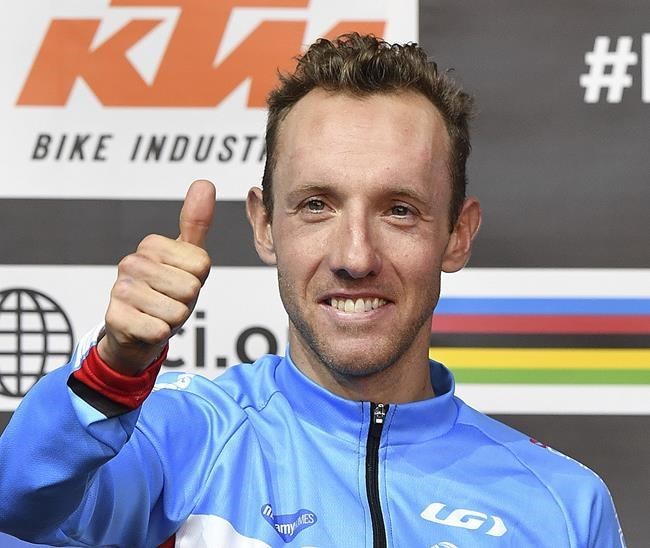 "I came to the team not knowing who I was as a cyclist and what I was capable of ... I had no experience in the (UCI) WorldTour when I joined the team, but JV (team CEO Jonathan Vaughters) said I could win an Ardennes Classic," Woods said in a statement, referencing the race trilogy made up of the Amstel Gold Race, La Fleche Wallonne and Liege–Bastogne–Liege.

"Knowing what I know now, that was a bold prediction for him to make about me at the time. I had not shown anything that truly indicated I could win a Classic, but he was right. I haven't won one yet, but with the results I got last year, these are races we know I can win."

The 32-year-old from Ottawa, who now makes his home in Spain, hopes to start the 2019 Tour de France and has his eye on returning to the Olympics in 2020 in Tokyo.

Woods competed at the 2016 Games in Rio despite a series of injuries that included a broken femur. He finished 55th despite throwing up in mid-competition.

"I really want to try to win some big races now," said Woods. "I'm starting to figure out how to win in the WorldTour. That doesn't mean I'm going to win every race, have success in every race. I know I will have some big failures ... but I'm much more consistent now. I have a better understanding of my fitness and can better predict how I will perform."

A former elite distance runner at the University of Michigan, Woods switched to cycling due to a recurrent stress fracture in his foot. His last track comeback ended with another break in 2011.

He spent three years as a pro on the North American circuit before earning a WorldTour contract following a breakthrough second-place finish at the 2015 Tour of Utah.

"We had our eyes on Mike for a long time before we actually signed him. His talent was clear based on his running, but it's a rare runner who can figure out the bike handling and nuance of bike racing," said Vaughters. "But at Tour of Utah in 2015, I felt he had a certain extra determination to get over those hurdles. He was a gut feeling signing. I'm so happy to see him progress so far."

"Performance-wise, the sky is the limit for Mike," he added. "That's exciting for the team. But beyond that, he's just a fantastic person to have on the team. Mike Woods is all heart. He gives all he's got to his teammates. And I couldn't be happier to have him on the team."