RCMP says it will look at how N.S. public was warned of active shooter threat

HALIFAX — Premier Stephen McNeil said Monday the province's emergency alert system wasn't used to warn people an active shooter was on the loose in northern Nova Scotia on the weekend because no request was received.
Apr 20, 2020 7:56 PM By: Canadian Press 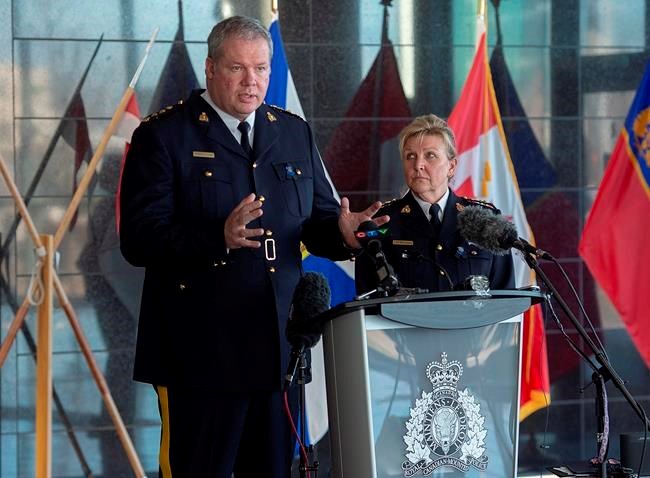 HALIFAX — Premier Stephen McNeil said Monday the province's emergency alert system wasn't used to warn people an active shooter was on the loose in northern Nova Scotia on the weekend because no request was received.

McNeil said the province's Emergency Measures Organization has to be asked to issue an alert and that didn't happen, but the premier wasn't about to place blame on the RCMP.

"This is a province in mourning. There will be lots of questions, but I can tell you I'm not going to second guess what someone with the organization did or didn't do at this moment in time," he said. "This was an active environment — deaths, gunfire — let's give them an opportunity as an organization to explain that."

Cpl. Lisa Croteau, an RCMP information officer, said the police force opted to use its Twitter account to warn people because the incident was unfolding.

The first tweet was sent at 11:32 p.m. local time Saturday and said police were "responding to a firearms complaint" in Portapique, N.S. "The public is asked to avoid the area and stay in their homes with doors locked at this time."

The next message on the Nova Scotia RCMP Twitter account came at 6:02 a.m. Sunday, advising that police were still on the scene in Portapique and it was "an active shooter situation." At 6:54 a.m. the suspect was identified in a tweet and a photo was published.

Chief Supt. Chris Leather said the RCMP relied on Twitter because its account has thousands of followers and it was judged "a superior way to communicate this ongoing threat."

But he said the question of why the provincial alert system wasn't used is a good one. "We'll be looking at that ... and I hope to have a more fulsome response tomorrow (Tuesday) or in the coming hours."

Before being killed by police, the shooter claimed at least 19 lives, including that of RCMP Const. Heidi Stevenson, at 16 locations across northern and central Nova Scotia, RCMP say.

In Ottawa, RCMP Commissioner Brenda Lucki said the question of how the threat was communicated will be looked at.

"In any incident such as this, we always have to look back at what we did," she said. "Nobody can lose their life in vain, and Heidi will not lose her life in vain, nor will the (many) other victims."

Lucki did not say whether the suspect had a firearms licence.

"We have to determine at each location what weapon was used," she said. "Until we know exactly the cause of each death, we're not in a position to say what types of weapons that the suspect was in possession of."