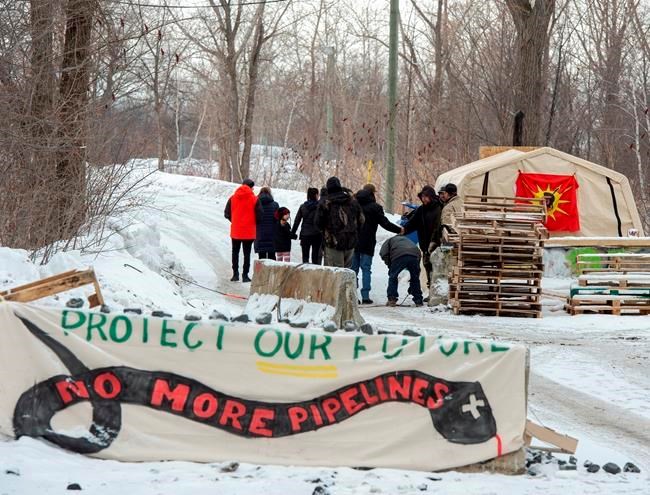 MONTREAL — Rail blockades in Quebec remained in place on Monday in spite of a draft deal reached Sunday in British Columbia between Wet'suwet'en hereditary chiefs and senior government ministers.

Kenneth Deer, the secretary of the Mohawk Nation at Kahnawake, said the community would meet Monday evening to discuss whether to dismantle a blockade that protesters have maintained on their territory south of Montreal since Feb. 8.

"We have to consider the situation and what happens next, and we'd like to do that in a community meeting so everyone can share common information and come to a consensus," Deer said Monday in a phone interview.

But details of the draft deal have not been disclosed, and Deer said Sunday the Mohawks wanted more clarification on the agreement before making a final decision.

On Monday afternoon, Montreal police confirmed they had been called to assist CN Rail in response to a new blockade at a rail bridge in Montreal's Pointe-St-Charles neighbourhood.

In a press release, the protesters said the action was one of several being organized around the country to force the government to accept the demands of the hereditary chiefs.

"We support Indigenous sovereignty and recognize the urgency to end the resource extraction projects that threaten future generations," they said. "The Wet'suwet'en demands were not accepted: the RCMP and (Coastal GasLink) are still occupying the territory."

Images broadcast by Radio-Canada at around 3:30 p.m. showed a small group of people standing in the rain near the tracks in front of a banner expressing support for the Wet'suwet'en. The protesters cleared from the tracks at around 5 p.m.

Meanwhile, the president of a regional rail line in Quebec's Gaspe region said activists were still maintaining their blockade in the Mi’kmaq community of Listuguj as of Monday morning.

Eric Dube said the company was able to get two trains through the blockade area on Friday but had to stop the following day due to the presence of protesters near the tracks.

He expressed frustration at the ongoing blockade, which he has said is jeopardizing the rail line's future.

"We feel like we've been taken hostage, because now there was an agreement in principle over there (in British Columbia)," he said.

— With files from Pierre Saint-Arnaud