MONTREAL — Rev. Jean-Luc Laflamme knows that Thetford Mines has seen better days. The "golden age" in the working-class community in southcentral Quebec, best known for its now-closed asbestos mines, was in the 1950s and 1960s, he said.
May 10, 2020 7:00 AM By: Canadian Press 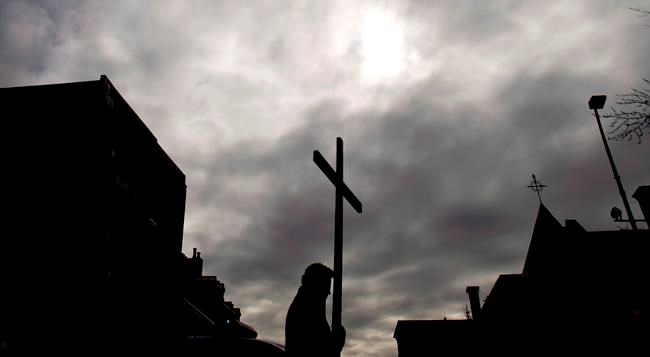 MONTREAL — Rev. Jean-Luc Laflamme knows that Thetford Mines has seen better days. The "golden age" in the working-class community in southcentral Quebec, best known for its now-closed asbestos mines, was in the 1950s and 1960s, he said.

But life has changed in the town of over 16,000 residents, and many of the area's Roman Catholic churches, which Laflamme said once numbered five in Thetford Mines alone, have gradually been forced to shut their doors.

Today, just one remains open: Saint-Alphonse, a towering, grey granite building with a white steeple that was built in the early 1900s.

Normally, the church would host three weekend masses, said Laflamme, the head priest in the Thetford Mines area: one on Saturday and two on Sunday.

But services have not been held at Saint-Alphonse in weeks, as the church is among thousands across Canada that have suspended all in-person services to stem the potential spread of the deadly novel coronavirus.

In Quebec, where the Catholic Church historically played a central role in society but has in recent years struggled with low attendance and a lack of revenue, the closures have made an already difficult situation worse.

"We're not in peril," said Laflamme, but the economic impact of COVID-19 is already clear.

Without weekend mass, the collection plate does not go around, and that typically brought in between $5,000 and $6,000 every month, he said. Funerals were also a place where donations could be collected, but they too have been cancelled.

Meanwhile, it costs approximately $25,000 per year to heat Saint-Alphonse, Laflamme said, and the church has other expenses, such as insurance and building maintenance costs.

He said some part-time, parish support staff have been temporarily let go until in-person services can resume.

Andreanne Jalbert-Laramee is a cultural heritage adviser at Quebec's Religious Heritage Council, a non-profit organization that supports the conservation of historic buildings. In 2003, the group carried out an inventory of 2,751 historic churches built before 1975 that were still in use across the province.

She said while the exact impact of COVID-19 of Quebec’s churches remains to be seen, it will likely be considerable because several were already struggling before the pandemic

Many churches operate on shoestring budgets and rely on aging volunteers to keep running. "They were able to survive on limited means — but we have to say, it was a miracle," Jalbert-Laramee said.

COVID-19 poses a challenge for houses of worship across Canada, but Jalbert-Laramee said churches in Quebec hold a special importance, both as landmarks in rural communities and for the role they played in health care and education over the decades.

But the Catholic Church's place in the daily lives of Quebecers has been in decline for years. According to the 2011 National Household Survey, nearly 75 per cent of Quebecers identified as Catholic. But fewer than 1 in 10 said they often attended religious services — the lowest rate in Canada, according to a Leger poll conducted in May 2019.

Quebecers were also the least likely of all Canadians to say they "strongly agree" with the statement, "I believe in God," the same poll found.

On Montreal's South Shore, Paul De Leeuw says local parishes have seen a 30 per cent drop in overall revenue since their churches closed in mid-March in line with the COVID-19 shutdown.

De Leeuw, treasurer of the Diocese of St-Jean-de-Longueuil, which includes 45 parishes from Chateauguay to Contrecoeur, said the lack of Sunday collections has hit them hard.

Church leaders have also hesitated to ask for annual donations from regular congregants – the tithe – because many families are struggling financially right now. "It's hard to ask for the tithe when there are people who lost their jobs," he said.

The diocese had already sold 28 churches over the past 15 years due to a lack of funds, De Leeuw explained, and today more than half of its parishes cannot sustain their daily operations.

De Leeuw said he hoped the parishes would be able to make it out of the pandemic without suffering major economic losses. In the meantime, the diocese is using financial reserves to pay the salaries of priests and other staff and avoid layoffs.

He said that likely would cost more than $100,000 once Quebec's COVID-19 restrictions are lifted.

While stores outside Montreal were allowed to reopen last week, there has been no indication when religious services will be able to resume in Quebec.

This report by The Canadian Press was first published May 10, 2020.