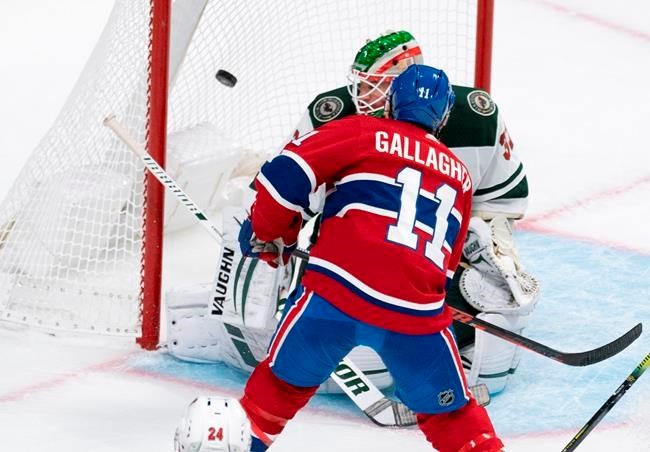 MONTREAL — It sounded like an overtime winner in the playoffs.

The Bell Centre erupted in a deafening roar when defenceman Victor Mete scored his first NHL goal in his 127th game — the longest goal drought to start a career in Canadiens franchise history.

Montreal went on to convincingly defeat the Minnesota Wild 4-0 on Thursday night. Nick Suzuki also scored his first NHL goal and Carey Price made 17 saves for the shutout.

"It feels good to finally get that out of the way," said Mete, whose first-period goal was the eventual winner. "That was pretty cool. The crowd was going pretty nuts. It was ear piercing.

"Everybody's wanted me to score for quite a while so to see everyone get as excited as they did, it's pretty special. It means a lot."

It was a long time coming for Mete, who made his Canadiens debut in 2017. The goal also ended the longest active drought by any player in the entire league.

"The fans saw him score his first goal and they made sure to show him their support," said coach Claude Julien of the crowd reaction. "No doubt, it's going to be engraved in his mind. Definitely a special night for him."

Mete's goal was the first of three for Montreal in a 4:46 span to end the first period to sink the visiting Wild.

The 21-year-old Mete, who grew up in London, Ont., found acres of space in the slot, took a backhand pass from Nick Cousins from behind the net and beat Alex Stalock glove side with 5:23 to play in the opening period.

"I heard Mete yell for it so I just kind of whipped it out front and he was nice enough to bury it," said Cousins, who was making his Canadiens debut. "I didn't know it was his first goal. That's exciting for him.

"I like my steak medium rare. We'll have to figure that out tomorrow for dinner. He's buying for sure."

Montreal was all over a considerably slower Wild side for much of the encounter and that speed paid off.

Joel Armia made it 2-0 with a 5-on-3 goal at 17:32 on a pass from Jonathan Drouin at the side of the net. Armia leads Montreal with four goals this season.

Wanting to share the spotlight with Mete, Suzuki then scored his first NHL goal with 37 seconds remaining in the period. A whiffed shot from Jeff Petry landed right on Suzuki's backhand from a tight angle before Stalock could cover his right post.

"Once I scored, it was just a weight off my shoulders," said Suzuki, who was playing his seventh NHL game. "I was able to play freely like I've always been playing. It's nice to have that."

Mete and Suzuki are the first Canadiens teammates to score their first NHL goals in the same game since 2005, when Chris Higgins and Alexander Perezhogin scored against the New York Rangers.

After an uneventful second period, Brendan Gallagher put a fourth past Stalock at 12:40 of the third by intercepting an ill-advised pass from Matt Dumba in the offensive zone. Stalock gave up four goals on 33 shots.

"They want to do well. This is a group that wants to win," said coach Bruce Boudreau of the last-place Wild. "Things aren't going well. Some players are trying too hard. Instead of simplifying things, they're trying to do too much.

"Our execution right now is nowhere near where it needs to be."

The Wild have a chance at redemption when Montreal travels to Minnesota for the rematch on Sunday.

Notes: Montreal improved to 2-2-0 at home this season. … Petry and Max Domi extended their point streaks to four games. … Defenceman Cale Fleury was back in the lineup after being a healthy scratch the last four games.

This report by The Canadian Press was first published Oct. 17, 2019.

Penguins visit the Capitals after Malkin's 2-goal game
Feb 23, 2020 3:16 AM
Eichel and Buffalo take on Winnipeg
Feb 23, 2020 3:16 AM
Ducks face the Golden Knights on 3-game skid
Feb 23, 2020 3:16 AM
Comments
We welcome your feedback and encourage you to share your thoughts on this story. We ask that you be respectful of others and their points of view, refrain from personal attacks and stay on topic. To learn about our commenting policies and how we moderate, please read our Community Guidelines.