The latest on the NHL trade deadline (all times Eastern): 4:35 p.m. The Calgary Flames have acquired defencemen Erik Gustafsson from Chicago and Derek Forbort from Los Angeles.
0
Feb 24, 2020 5:07 PM By: Canadian Press 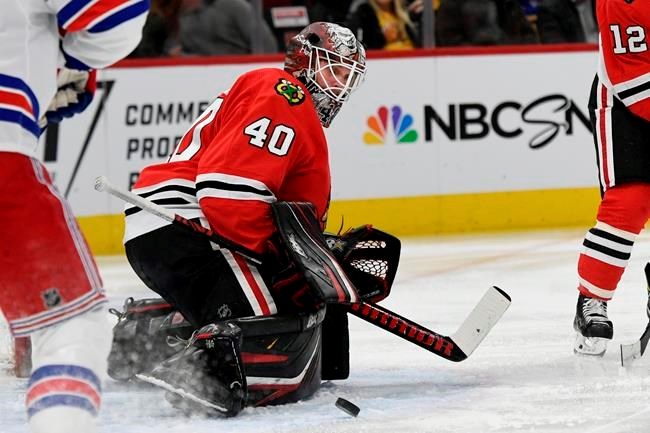 The latest on the NHL trade deadline (all times Eastern):

The Calgary Flames have acquired Erik Gustafsson from Chicago and Derek Forbort from Los Angeles.

The Flames sent a 2020 third-round pick to the Blackhawks for Gustafsson and a conditional 2021 fourth-rounder to the Kings for Forbort.

Rival Edmonton over the past 24 hours acquired Mike Green and forward Andreas Athanasiou from Detroit and forward Tyler Ennis from Ottawa.

Goaltender Robin Lehner says he is excited about a trade from the Chicago Blackhawks to the Golden Knights.

Lehner tweeted: "Going to be a ride. Can’t wait to get there." Lehner is expected to back up Marc-Andre Fleury in Vegas

The Pittsburgh Penguins have acquired forwards Conor Sheary and Evan Rodrigues from the Buffalo Sabres for Dominik Kahun.

Sheary returns to Pittsburgh, where he previously won the Stanley Cup twice with the Penguins. Sheary was traded from Pittsburgh to Buffalo in June 2017 for a conditional draft pick.

He struggled to find his consistency in Buffalo, where he had 23 goals and 53 points in 133 games, including nine goals and 19 points this season.

Rodrigues is leaving Buffalo after requesting a trade two months ago over his lack of playing time.

The Sabres have been looking to add secondary scoring behind captain and leading scorer Jack Eichel. Kahun is known for his speed and versatility up front.

The New York Islanders didn't give up as many as three draft picks just to rent Jean-Gabriel Pageau for the rest of the season.

The Islanders signed the 27-year-old to a six-year extension hours after acquiring him from the Ottawa Senators. Pageau is now under contract through the 2025-26 season.

New York trade conditional first- and third-round picks and a second to Ottawa for Pageau, who should help it improve on . The Islanders rank 22nd in the NHL in goals a game.

Locking him up long term means the Islanders could have Mathew Barzal, Brock Nelson and Pageau down the middle for years to come.

The Edmonton Oilers are trying to give Connor McDavid and Leon Draisaitl some help by acquiring winger Andreas Athanasiou from the Detroit Red Wings.

Edmonton is sending 2020 and 2021 second-round picks and forward Sam Gagner to Detroit for Athanansiou, who's a restricted free agent after this season. The Oilers also got winger Ryan Kuffner in the trade.

Oilers general manager Ken Holland had been with the Red Wings for several years and was part of the front office that drafted Athanasiou.

Edmonton on Sunday night acquired Mike Green in another trade with Detroit.

The Buffalo Sabres have acquired forward Wayne Simmonds from the New Jersey Devils in exchange for a conditional 2021 fifth-round pick.

Simmonds is expected to remain with the Sabres for the duration of the season despite being in the final year of his contract.

Simmonds, 31, adds depth to Buffalo’s forward ranks. The Sabres have been looking for secondary scoring behind captain and leading scorer Jack Eichel.

Simmonds signed a one-year, $5 million deal with the Devils last . The Devils will retain 50 of Simmonds’ remaining salary.

Simmonds has had two 30-goal seasons, with a career-best 32 goals for Philadelphia in 2015-16. He has eight goals and 16 assists for the Devils this season.

The Sabres (29-25-8) are six points behind the Toronto Maple Leafs for a playoff spot in the Atlantic Division. They have won five of their last six games.