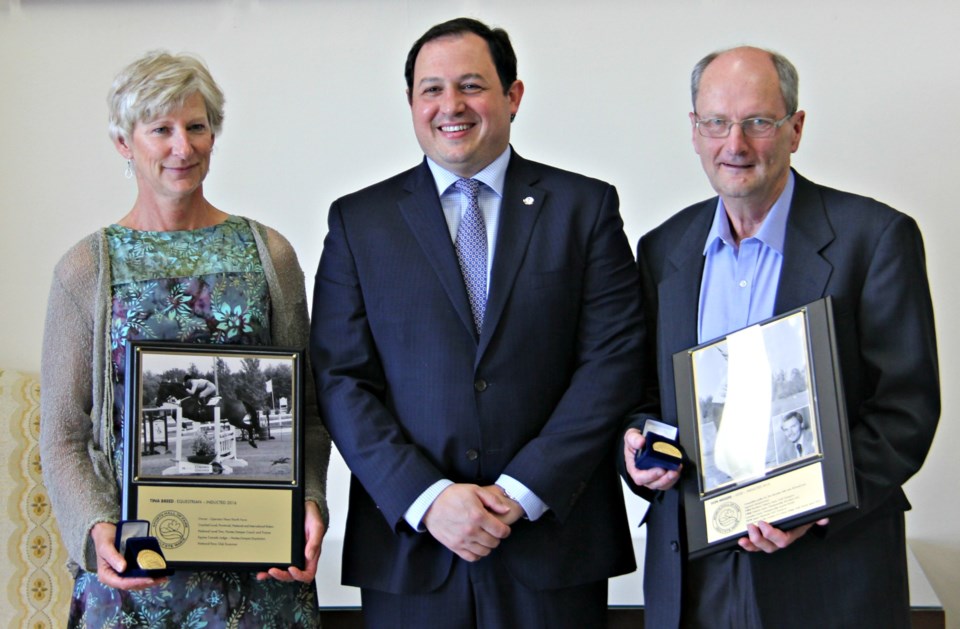 The Sault Ste. Marie sports hall of fame welcomed a pair of new members on Thursday.

Tina Breed and Don Missere were officially inducted in a ceremony at city hall Thursday evening.

Missere, who doesn’t golf as much as he once did, was caught off guard by the honour.

“It’s a huge honour,” Missere said. “I didn’t think I had enough national exposure to qualify for it to be honest.”

Breed has competed in Equestrian both as a rider and as a coach. She was surprised by the honour.

“Honestly I think it should be going to somebody else because I don’t feel that I deserve all the accolades,” Breed said. “But according to everybody else, it seems to be something well deserved.”

“I loved what I did and I did it to the best of my ability and by the success of my riders and horses and the fact that they are all still my close friends, I would say that it was a very good time for one an all.”

Breed is the past owner/operator of Near North Farm and has coached numerous local, provincial, national and international riders.

The 57-year-old, who also competed from an early age until she retired from Near North three years ago, competed in numerous provincial championships both as a rider and with her students as a coach.

“Highlights as a coach are seeing every last rider achieve their goals and that big smile on their face,” Breed said. “

Breed also taught Therapeutic Ride Algoma, which is a program for riders with physical and mental challenges.

A well-established golfer, Missere said there are a number of memorable moments in his career.

“I’ve been asked that a few times and I don’t know how to answer it,” Missere said. “I enjoyed the competitive nature of golf. That’s what I played for and that’s why I played so much.”

In five decades as a competitive golfer, Missere has over 40 local and regional championships.

Among his tournament titles are the Northern Ontario junior golf title in 1965 at 17-years-old and finished second the following year before attending the Ontario Junior Championship.

In 1974, Missere was the Upper Peninsula Golf champion. He recalls that event very well. Heading into the final day with the lead, Missere remembers a feeling that wasn’t very common for him during his competitive days.

“I remember being very nervous on the last day,” Missere said of the four-day event. “For whatever reason it was difficult.”

Missere’s son Rob, also won the Upper Peninsula Golf title, 20 years after his father won it on the same course in Sault, Michigan.

Missere said he hasn’t golfed as much in the last few years and hasn’t picked up a club yet this summer.”

“I’m not a social golfer,” Missere said. “I like to have something on the line.”

The 68-year-old said he began golfing around 10-years-old.

“The only reason I played golf was my mother and father built a house right next to the golf course,” Missere said. “And back in those days there was all bush around it. We used to sneak around down by the river and back up the tenth tee. We wouldn’t play No. 1 and No. 18 because they were right near the pro shop.”