175 student-athletes, coaches, staff and guests gathered to celebrate a banner season of athletics at Sault College
Apr 14, 2019 10:00 AM By: SooToday Staff 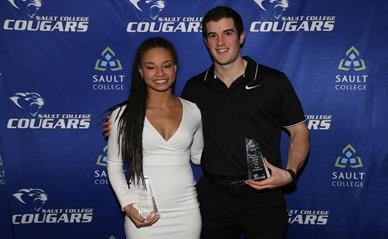 The 2018-19 season saw the Cougars field nine teams in the sports of: golf, cross country, curling, (M/W) basketball, (M/W) hockey and (M/W) indoor soccer. This included 150 student-athletes and 33 coaches who donned the Cougar colours in competitions across Canada and the United States. Amongst the hardware given out were the most valuable players in each sport.

The night also saw the presentation of long-standing awards to student-athletes who in their day-to-day lives represent their respective teams and Sault College as a whole at an exemplary level:

Coach of the Year

Team of the Year

Rookie of the Year

The festivities concluded with the naming of our Athletes of the Year presented by Matt Trainor, Director of Student Services.

The Female Athlete of the Year was a graduating women’s basketball player Mercedes Ryan (Sault Ste. Marie/CYW) who took home the prestigious award capping a brilliant career at the college. Mercedes, the captain of the basketball team, was named as the OCAA Athlete of the Week in February. Over her time at the college she has been a leading scorer and dominant force for the Cougars.

The Ross Bachert Male Athlete of the Year was awarded to Ryan Vendramin (Sault Ste. Marie/Police Foundations) of the Men’s Hockey team. Vendramin, the team’s captain, was chosen this year to represent the American Collegiate Hockey Association as a member of the ACHA Division 3 Selects in Russia for the Student Hockey Challenge. He went on to become the overall leading scorer in the ACHA Division 3 and was selected as the league MVP in Dallas where he led the Cougars to their first National Championship in school history.

The Cougars Athletic department would like to wish all of its graduating student-athletes good luck and thank all of our coaches and staff who made the year’s successes possible through their hard work and dedication. The Cougars are looking forward to the next season as they welcome in a new year of recruits and the pursuit of both provincial and national glory.

Minor baseball season cancelled locally
Jun 30, 2020 3:00 PM
Comments
We welcome your feedback and encourage you to share your thoughts. We ask that you be respectful of others and their points of view, refrain from personal attacks and stay on topic. To learn about our commenting policies and how we moderate, please read our Community Guidelines.