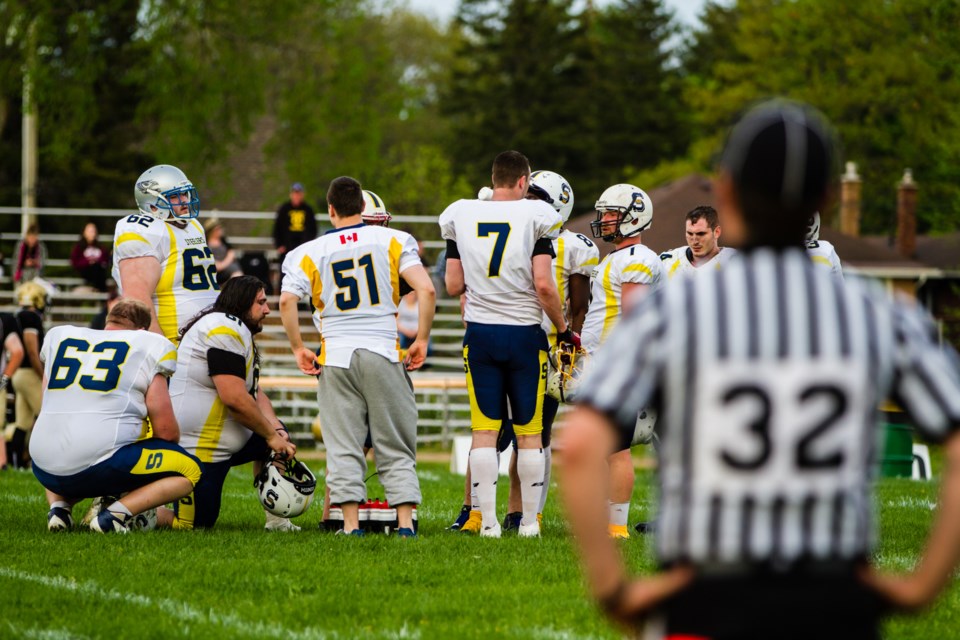 The Sault Steelers hosted the Tri-City Outlaws during the Don McBain Memorial Home Opener at Rocky DiPietro Field on Saturday, May 26, 2018. Donna Hopper/SooToday

A pair of late touchdowns were ultimately the difference.

A 27-yard touchdown run by Josh Gauthier with 5:14 to go in the fourth quarter lifted the Sault Steelers to a 23-10 Northern Football Conference win over the Sudbury Spartans Saturday night at Rocky DiPietro field.

The major came with the Steelers trailing 10-8 at the time in a game that saw the home side fall behind 10-0 in the opening half.

“It was key,” said Steelers Coach Brandon Lewis. “It was vintage Josh.

Gauthier finished the day with 104 yards rushing on 11 carries and a pair of touchdowns.

The victory improves the Steelers record to 2-2 after a road win last weekend in North Bay.

“Everything you do in your first year is great but when you know the type of competitors we have on our team, it’s possible for us to push the best teams in this league,” Lewis said.

Sudbury opened the scoring on a 13-yard field goal in the opening quarter by Massimo Cimino.

In the final minute of the opening quarter, Sudbury’s Sean Moore caught a two-yard pass to increase the lead to 10-0.

“The first half seemed to be very tough on us, more mentally than anything,” Lewis said. “There were some mistakes and penalties to start the game. That can take a toll. We hung in.”

Steve Hiiemaa would run the ball in from 68 yards out late in the fourth quarter to seal the Steelers win.

Hiiemaa finished the day with 130 yards rushing on 10 carries.

Offensively for the Spartans, Josh Cuomo had 55 yards rushing on 15 carries.

Defensively for the Steelers, Matt Gauthier had six tackles while Dalton Povey had 5.5 tackles. Tom Twentyman had five tackles and Jon Bujold had 4.5.

Erik Conrad and Matt Furlino had six tackles each for the Spartans, who fall to 1-3.

The Steelers return to action on June 23 against the Steel City Patriots. Kickoff at Rocky DiPietro Field is set for 7 p.m.