Without three veterans due to injury, the Soo Greyhounds lost the second game of a three-game road trip on Saturday night in Flint
Oct 26, 2019 11:55 PM By: Brad Coccimiglio 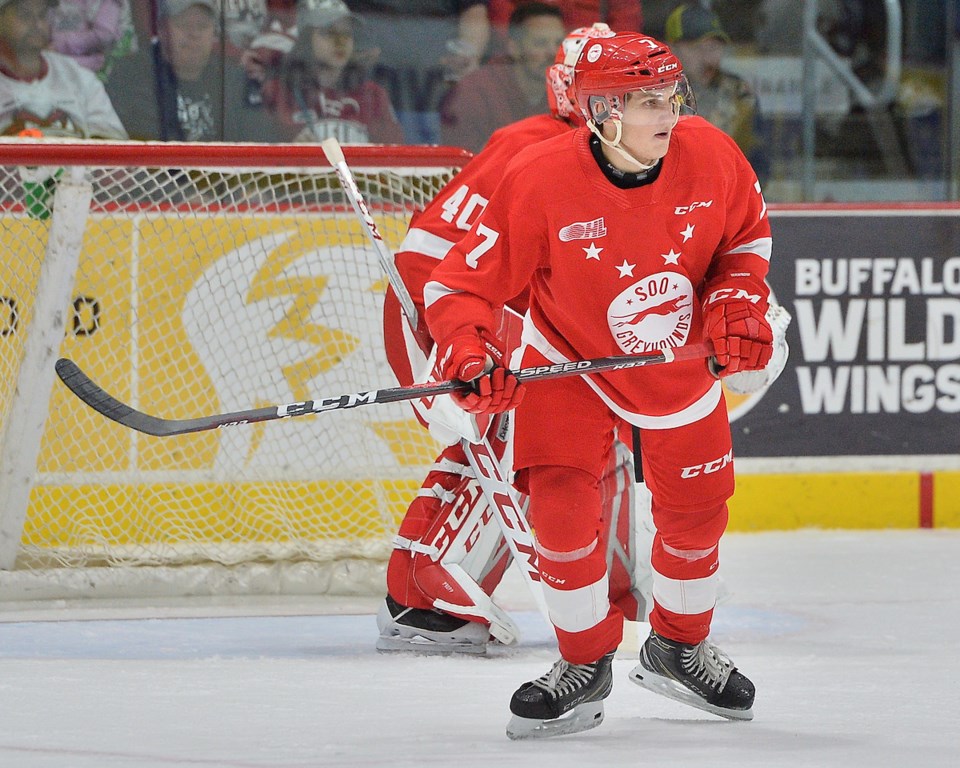 FLINT, Mich. – The Soo Greyhounds left the Dort Federal Event Center in Flint on Saturday night without two points, but the team will look back at the positives.

The team dropped a 4-1 Ontario Hockey League decision to the Flint Firebirds on Saturday but did so with an effort the club was mostly pleased with.

“I didn’t like our push back in the first half of the third period but if you take that away, I’m really happy with the way we competed,” said Greyhounds coach John Dean. “We had a lot of scoring chances but couldn’t find the back of the net. We get a really big game out of Christian Propp and we couldn’t find the back of the net. That’s what happens when you have a losing streak, you can’t seem to put it all together. The big thing is, for our young guys, I’m happy with the way they played.”

Dean credited the young group in taking a step forward but feels the need for more from the veteran players on the team.

The Greyhounds played the game minus veteran defenceman Ryan O'Rourke (lower body) and Jacob LeGuerrier (upper body) due to injury.

“It’s obviously a big loss losing those two guys, but our coaches’ mentality is next in line and a lot of the rookies stepped up, especially on the defensive end,” defenceman Drew Wawrow said. “They got a lot more minutes than they usually do. Obviously, it’s not the result we wanted, but there are positives we can take out of the game.”

“The D corps did a fantastic job,” Dean said. “You always go back and look at games and demand more of your players, but we put a lot of young guys in a tough spot tonight and they did a very good job.

Among the group was an increased workload for Drew Wawrow, who filled in for O'Rourke on the power play as well as moving onto the Greyhounds second defence pair with Robert Calisti.

“I felt good out there,” Wawrow said of the increased role.

“He made a lot of easy plays tonight and he made things look easy,” Dean said. “He’s got a really exceptional hockey IQ. When he keeps his game simple, he makes other teams look subpar by making simple passes to the middle of the ice or simple five-foot passes.”

Propp made 40 saves for the Greyhounds.

“Christian Propp was great,” Dean said. “He gave us every opportunity to win.”

“He gave the guys a lot of confidence and in turn, we made plays and had chances ourselves because of that,” Dean added.

Jaden Peca had the lone goal for the Greyhounds.

Jack Wismer had a goal and two assists for the Firebirds while Jack Phibbs had a paid of goals.

Connor Roberts picked up a pair of assists. Brennan Othmann had the other Flint goal.

The loss drops the Greyhounds record to 6-7-1-0 while Flint, winners of four straight games, improve to 9-3-0-0 and sit atop the OHL’s West Division.

The Greyhounds wrap up their three-game trip on Sunday evening in Saginaw against the Spirit.

Dean said the three injured Greyhounds aren’t expected in the lineup for the game.

In other action around the OHL on Saturday night, in Hamilton, Tag Bertuzzi had the shootout winner as the Hamilton Bulldogs beat the Oshawa Generals 3-2. Marco Constantini made 28 saves for the Bulldogs and stopped all three shooters in the shootout.

In Erie, Chad Yetman had the shootout winner as the Erie Otters beat the London Knights 6-5. Hayden Fowler had a goal and two assists for Erie. Connor McMichael had two goals and an assist while Antonio Stranges had a pair of goals for the Knights.

In Kingston, Redi Valade had a goal and an assist as the Kitchener Rangers beat the Kingston Frontenacs 3-2. Mike Petizian set up a pair of goals for Kitchener.

In Peterborough, Liam Kirk had a goal and three assists while Nick Robertson had three goals as the Peterborough Petes beat the Mississauga Steelheads 10-3. Mason McTavish had a pair of goals for the Petes.

In Saginaw, the Sudbury Wolves scored four times in the opening period en route to a 5-2 win over the Saginaw Spirit. Nick DeGrazia had a goal and an assist for the Wolves while Quinton Byfield had a pair of assists.

In Barrie, Tyson Foerster scored on a penalty shot with 2:13 to go to give the Barrie Colts a 4-3 win over the Niagara IceDogs. Foerster had a pair of goals for the Colts. Ryan Suzuki chipped in with a goal and an assist each.

In other news around the league, Sault native Nick Porco was dealt by Saginaw to the Barrie Colts on Saturday.

The Spirit sent the Dallas Stars prospect to the Barrie Colts along with defenceman Ian Lemieux in exchange for forward Dalton Duhart, two second round picks, two third round picks, and a fifth round pick.

Former Greyhound Calvin Martin was dealt by the Sarnia Sting earlier this week.

The Sting dealt the 20-year-old forward to Mississauga in exchange for an 8th round draft pick in 2023.

Other deals in the league in recent days saw the Ottawa 67’s solve their overage situation by dealing veteran defenceman Hudson Wilson to the Peterborough Petes for a draft pick.

On Friday, the North Bay Battalion dealt Nick King to the Kingston Frontenacs, also for a draft pick.