The Soo Greyhounds and Saginaw Spirit will return to Sault Ste. Marie for a sixth game in their OHL Western Conference semifinal series
0
Apr 12, 2019 10:59 PM By: Brad Coccimiglio 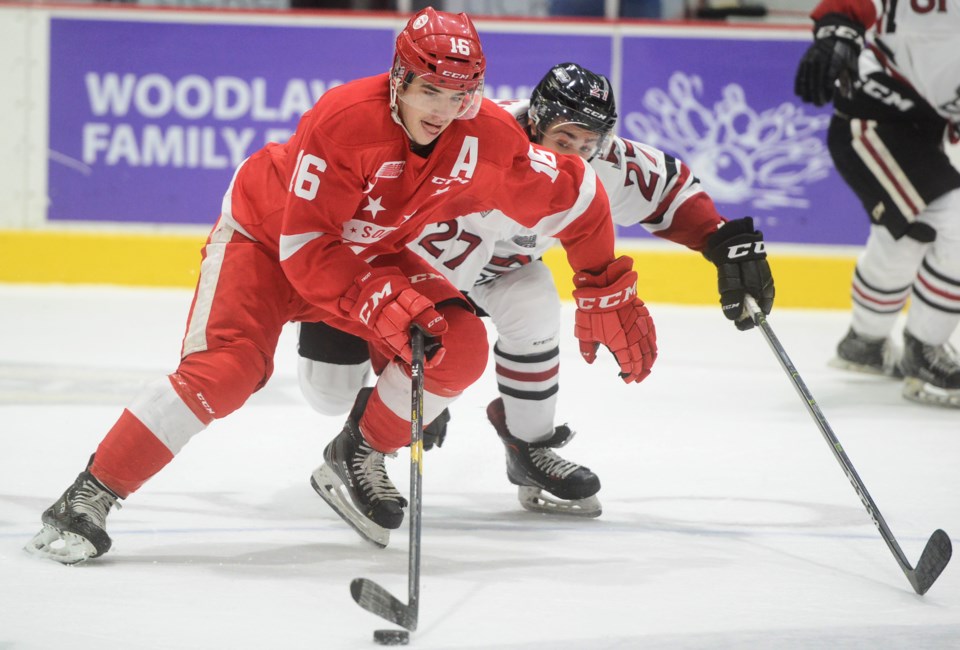 It would be hard to blame the Soo Greyhounds if they’re feeling a little more confident these days.

After falling behind 3-0 in their Ontario Hockey League Western Conference semifinal series against the Saginaw Spirit, the team had extended the series at least to a sixth game thanks to a 6-2 win on Friday night at the Dow Event Center in Saginaw.

Feeling like they deserved better at times in the series, the Greyhounds are gaining confidence.

“We thought we deserved a better fate than to be down 3-0 and the hockey gods are starting to balance things out for us,” said Greyhounds coach John Dean.

“We’re playing well, and we have confidence,” said forward Morgan Frost, who had four points in the win.

The confidence overrides the idea of a momentum swing in the series.

“We always knew how resilient this group was but the big thing we’ve learned is how the kids have shown a ton of confidence in games like this that are high-pressure situations,” Dean said. “Our older guys, we knew had it from their experience before, but I like the way our younger guys have also responded. Nobody is shying away from the puck. They all want to play Soo Greyhound hockey.”

The Greyhounds got a pair of bounces in the opening period to take the early lead. Just over seven minutes in, on a partial break, Frost missed the net on a chance from the right circle, but the puck rebounded to the side of the goal and the veteran tucked it past Saginaw goaltender Ivan Prosvetov to open the scoring.

Then, late in the period, Jaden Peca scored from the right circle after a shot by Barret Hayton went off the end glass and bounced into the circle onto Peca’s stick to give the Greyhounds a 2-0 lead.

“We always talk about trying to win the first period,” Dean said. “We knew they were going to come out with a real hard press and anytime another team comes out and presses that hard and the result is (in your favour), you feel pretty good about yourself. It rolled into the second and third periods. They pressed us pretty good on the forecheck, but we responded when we capitalized on odd-man rushes.”

After being held to a goal and an assist through the opening three games of the series, Frost scored three times and assisted on another goal for the Greyhounds on Friday, giving the Philadelphia Flyers prospect seven points in his last two games.

“I’m playing almost desperate hockey,” Frost said. “We were down 3-0 and you have to put it all out on the line and see what happens. That’s how I’ve been approaching it.”

“When Morgan Frost is feeling good and is on his game, he can take over,” Dean said.

Matthew Villalta made 41 saves for the Greyhounds.

“The reason we’re here is because of Matt Villalta,” Dean said. “He’s very hard on himself and he wasn’t happy with the first three games, but he stepped up to the plate big time, especially tonight. He was fantastic.”

Peca finished the night with a pair of goals while Keeghan Howdeshell chipped in with a goal and an assist. Hayton, Mac Hollowell, and Jordan Sambrook assisted on two goals each.

Ivan Prosvetov got the start for the Spirit in goal but was pulled after giving up five goals on 16 shots. Rookie Tristan Lennox entered the game and stopped five of six shots the rest of the way.

“We played a hell of a game,” Saginaw coach Chris Lazary said on the Spirit television broadcast.

Frustration set in at times for the Spirit because of the way the game played out.

“They’re frustrated because you watch the two bounces that go in against you or we get a chance and hit a post and they go down and score, but it was just one of those games,” Lazary said. “You can’t feel bad for yourself. It’s about your mindset now.”

There were positives for the Spirit despite the outcome.

“We were all over them,” Lazary said. “For the most part, they just flicked pucks out of their zone and when we made a couple of mistakes, they buried their chances. We were in the zone for periods at a time. We played a good game.”

“Go in there and get the first goal and feel good about ourselves,” Lazary added.

Dean said some adjustments can be made for game six as well.

“I’d like to see more zone time and more pucks behind their D,” Dean said. “I’d like to see some cleaner exits out of our end, but I also want to see us continue to capitalize on our chances and bury pucks when we have the opportunity. Our guys clearly feel good right now when they have the puck right now.”

Puck drop for game six at the GFL Memorial Gardens is set for 7:07 p.m. If necessary, game seven is scheduled for Tuesday night in Saginaw.

In Friday’s other game, the London Knights looked to close out the other Western Conference semifinal series at home against the Guelph Storm, but the Storm avoided elimination with a 3-1 win. A goal by Nick Suzuki 3:59 into the third period was the difference. Suzuki finished the night with a pair of goals as he sealed the win with an empty netter late. Anthony Popovich made 35 saves for Guelph. The series shifts back to Guelph for game six on Saturday night.

Greyhounds battle back but can't capitalize in loss to Firebirds (video)
Jan 22, 2020 10:43 PM
Comments
We welcome your feedback and encourage you to share your thoughts on this story. We ask that you be respectful of others and their points of view, refrain from personal attacks and stay on topic. To learn about our commenting policies and how we moderate, please read our Community Guidelines.