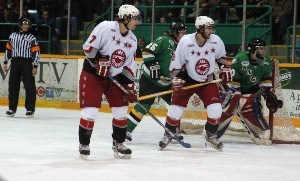 The Soo Greyhounds saw their season come to abrupt end on Sunday afternoon.

The London Knights put an end to a Greyhound rally with a goal with 6:08 remaining to defeat the Soo Greyhounds 4-3 at Memorial Gardens in front of a near capacity crowd of 3,889.

Meanwhile down in Plymouth, the Windsor Spitfires harpooned the Whalers and scored a 6-2 win.

The Greyhounds loss coupled with the Spitfires win gives Windsor the eighth and final playoff spot in the Ontario Hockey League's Western Conference by a single point.

After the Knights pulled ahead of the Greyhounds 3-1 midway through the third period on a goal by Robbie Drummond, the Greyhounds started to rally as Jacob King tipped home his sixth goal of the season.

Travis Chapman then scored on a screen shot 1:35 later to tie the game at 3-3 with 7:21 remaining in regulation time.

With the Greyhounds aware of an impending Spitfires victory in Plymouth, a tie or an overtime loss with London would have setup a tiebreaker in the Sault on Tuesday night.

But Khomutov converted a pass in front from Scott Sheppard just 1:13 after Chapman's tying goal to lift the Knights to the win.

"We didn't play great and I thought we were nervous. Our defense was nervous and shaky with the puck, we didn't do the little things right and we weren't able to generate much offense until the third period," said Greyhounds head coach Marty Abrams.

The win also put an end to a long standing OHL record held by the Greyhounds franchise. With 110 points, the Knights eclipsed the old mark of 109 set by the 1984-85 Soo Greyhounds although London played two more games this season. Abrams was a goaltender on that Greyhound powerhouse.

Aaron Lewicki, who had a strong game for the Greyhounds, opened the scoring 4:50 into the game when he knocked the puck from under London goaltender K.J. Robinson into the net.

Daniel Bois tied the game at 1-1 with a power play goal in the first period. Dylan Hunter, the game's first star, scored the lone goal of the second period for London. Rob Schremp was also solid for the Knights and added two assists as did Scott Sheppard.

Kevin Druce stopped 32 of 36 London shots while Robinson played well in his debut and stopped 27 of 30 Greyhound shots.

With the Knights having secured the conference championship, the team opted to scratch three of their top defenseman for the game and give Robinson, who was called up from junior B Strathroy, his first OHL start.

The Knights sat out top defenseman Dennis Wideman along with Frank Rediker and Marc Methot. Also scratched was 37 goal sniper David Bolland for the first time this season. Corey Perry was dressed but saw little action after the first period.

Abrams was upset with the fact that his team was unable to capitalize on the chance to beat the Knights with their depleted yet still solid lineup.

"When you play against a team that doesn't have three of their top four defenseman dressed and have a junior B goalie in net and you can't win in front of 4,000 fans then you don't deserve to be in the playoffs and that's the bottom line," said Abrams.

"We missed opportunities all year. We put ourselves in a situation for a one game showdown with the best team in Canada. They came in here with a flu bug which should have given us an edge but it didn't. They had guys step up and they wanted to win.

"I have been telling them everyday since the start of the year that you can't continually miss opportunities. That goes for anything in life, if the opportunity is there you have to seize it. You can't wait until the last day and that's what we did. This is a lesson we need to take home for the summer and not let it happen again."

The Greyhounds finish the season with a 30-34-3-1 record for 64 points. Despite not qualifying for the playoffs, the team made improvement on their record of 26-33-6-3 for 61 points last season when the team qualified for the eighth and final playoff spot.