Gretzky, Orr, and Obama are out for dinner, Keegan wants to join them

In our latest Q&A installment, we sat down with Guelph Storm forward, and Sault Ste. Marie native, Keegan Stevenson
Jun 10, 2019 10:00 AM By: Brad Coccimiglio 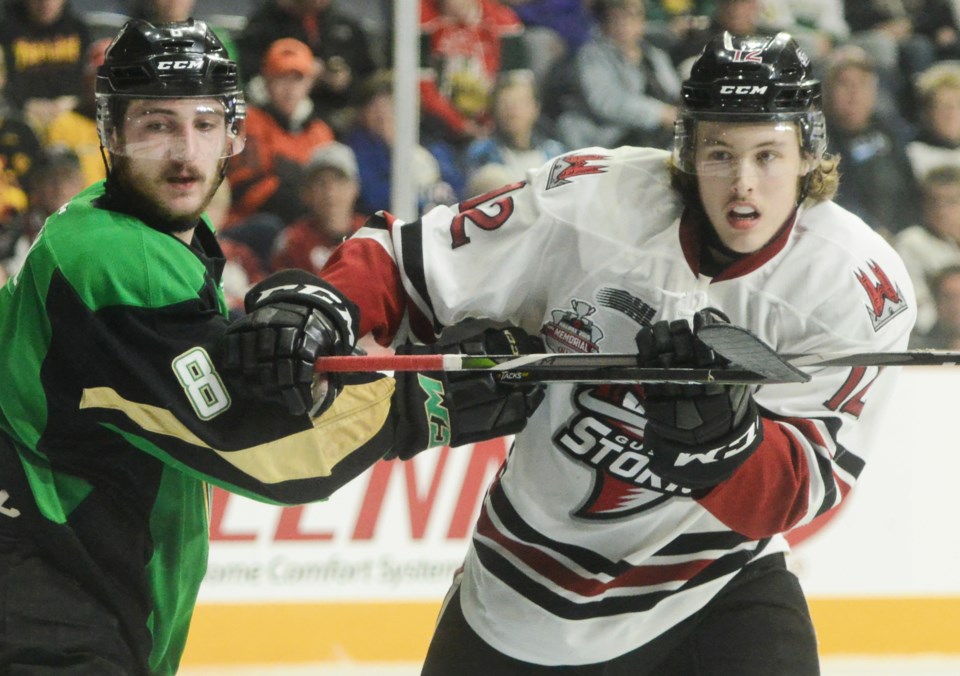 It was a banner year for Sault Ste. Marie native Keegan Stevenson.

Eligible for the 2019 National Hockey League draft, the young Guelph Storm forward played a key role as the Storm won an Ontario Hockey League title and an appearance at the recently-completed Memorial Cup in Halifax.

SooToday caught up with Stevenson at the tournament for our latest Q&A installment.

Q: What was your first sports memory?

KS: My first sports memory is when I was younger when my dad was playing up in the pros, after games he would take me on the ice to skate around with him. That was pretty cool.

Q: What other sports are you interested in aside from hockey?

KS: Growing up, I played soccer. Back home, I came back and played for my high school team.

Q: Who are three people, dead or alive, that you would like to have dinner with and why?

I’d like to go with some hockey guys. Probably Wayne Gretzky. He’s an awesome guy and I would love to meet him in person.

Bobby Orr. I’m with his (player agency) but I haven’t met him in person yet.

Maybe one of the U.S. presidents like (Barack) Obama. He’s such a good influence for so many people. I find it awesome that he can do that.

Q: Aside from something in sports, what would be a non-sports related career that you could be interested in?

KS: I just applied to university for accounting. I was looking into that.

I’m into more of the math.

Q: Who is the one person, dead or alive, that you admire most?

KS: I admire my dad the most.

He’s been through all of what I’m going through. I look up to him a lot.

Q: If you could be the NHL commissioner for one day, what’s one change you would make to the sport?

KS: I don’t think I would make a change.

I think everything right now going on in the NHL is pretty good. I like how it’s going.

Q: What’s the most important life lesson you have learned so far?

KS: Just be truthful and keep working hard. Just have a good work ethic and never give up.

Q: What’s something people would be surprised to learn about you?

KS: Most people think I’m a shy person and I don’t really talk much but once I get to know someone, I like to joke around with them and play some tricks on them.

Q: If you could have one superpower, what would it be?

KS: To read people’s minds. Just to know what they’re thinking or what they want to say would be pretty cool.

Q: You’re stranded on an island, what three things would you bring with you?

KS: Maybe another person there to help me out.

A tent or a tarp to have some cover and a weapon or something so you can get some food.