Father and son face off in World Cup of Curling final 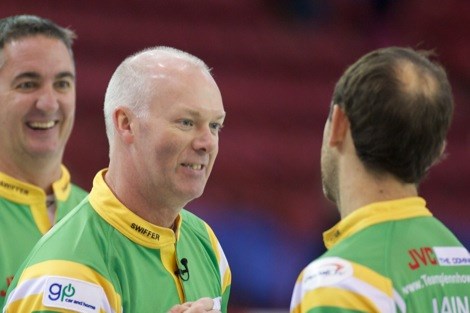 Glenn Howard’s son, Scott Howard, plays second for Epping, making this the first father vs. son final in the history of the Capital One Grand Slam of Curling

SAULT STE. MARIE - And then there was two.

Sixteen of the world’s best curling teams have been eliminated, leaving Glenn Howard of Coldwater, Ontario and Toronto, Ontario’s John Epping to do battle for the GP Car and Home World Cup of Curling.

Howard defeated Sweden’s Niklas Edin in his semifinal match, while Epping bested reigning Olympic Champion, Kevin Martin of Edmonton, Alberta in the other semifinal, earning both winners the right to play in the final of the first Capital One Grand Slam of Curling event of the season.

The two finalists are a strong contrast from one another as Glenn Howard has won eight career Capital One Grand Slam of Curling titles, while Epping is a first time Grand Slam qualifier as a skip.

Both teams took different paths to the final as well, with Howard’s team finishing with a 4-1 round-robin record and easily qualifying for the playoffs and Epping’s team had a 3-2 record and needed to win a tie-breaker this morning just to qualify for the quarter-finals.

Despite these teams being so dissimilar, the individuals who make up these teams are very familiar with each other – John Epping has played with Howard third’s, Wayne Middaugh, in the past; and Epping’s third, Scott Howard, is Glenn’s son.

Both Glenn and Scott Howard are excited to be in tomorrow’s final, but playing against each other adds even more emotion to the game.

“Just being in the playoffs is surreal, especially with such a new team, but to play against my dad in a final is crazy – especially at such a huge event,” said Scott Howard. “Bragging rights at the dinner table will definitely be on the line tomorrow.”

When asked who the rest of the Howard family would be cheering for tomorrow, Scott and Glenn offered slightly different schools of thought.

“My mom will be cheering for both of us, but she’ll probably want me to win in the end,” said Scott Howard. “Dad’s already won enough of these, now it’s my turn.”

“There are really three opinions that matter here,” said Glen Howard. “My mother will be hoping for no injuries and a tie and my wife will be cheering for Scott, but Scott’s sister will definitely be hoping for me to kick his butt.”

In tonight’s semifinals, Glenn Howard defeated the suddenly red-hot Edin, who came into the game riding a four-game winning streak including a victory in this morning’s tie-breaker, followed by knocking off the previously undefeated Jeff Stoughton in the quarter-finals.

Howard led 3-2 after three ends and never looked back, stealing two points over the next four ends to seal the 5-2 victory.

In Epping’s semifinal showdown with Kevin Martin, Epping took a 4-2 lead after five ends and managed to hold the veteran to just a single point over the next three ends for a nail-biting 4-3 win.

Epping now holds a four-game winning streak entering tomorrow’s final, including consecutive wins against the last two Olympic Champions in Martin (2010) and Brad Gushue (2006), who lost to Epping in the quarter-finals.