Today at the Sault Ste. Marie Sports & Entertainment Centre, you somehow couldn't shake the impression that Denny Lambert was born for this moment.
0
Jun 24, 2008 1:04 PM By: David Helwig 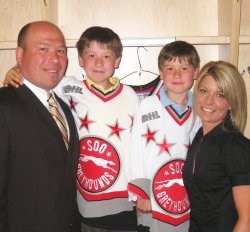 Today at the Sault Ste. Marie Sports & Entertainment Centre, you somehow couldn't shake the impression that Denny Lambert was born for this moment. After eight seasons in the National Hockey League and five as an Ontario Hockey League assistant coach, Lambert was named today as head coach by the Soo Greyhounds Hockey Club.

Appearing at a noon-hour news conference with wife Rhonda and sons/ future Hounds Denver and Chase, the longtime #2 seemed to slip effortlessly into the Sault's #1 coaching job. Although known as a fiery enforcer during his pro career, Lambert's street cred within the Hounds organization has been as the decent guy who pulled players through the inevitable low points of their careers.

But can he replace Hardass Hartsburg, who's more a pusher than a puller, driving athletes to championship form?

Can the good cop also play the role of bad cop to bring out the best in his players?

Soo Greyhounds management and owners are confident Lambert is the best man for the job.

And no longer required to carry Hartsburg's water, the Wawa homeboy appeared himself confident and comfortable today with his new role.

"I am a different coach in some ways," Lambert said, declining to go into specifics.

He says if you ask around the club, you're likely to find players who consider him a hardass, too.

Lambert believes he can gain the respect of the Greyhounds players and can get them to respond to the Denny Lambert leadership style.

Lambert spoke in glowing terms about Craig Hartsburg, indicating he had learned from "one of the best."

Hounds General Manager Dave Torrie, who introduced Lambert at today's news conference, conceded that he was rooting for Lambert, but "he won the job fair and square."

Lambert has been signed to a three-year contract. The following news release was issued by Soo Greyhounds:

“I am very pleased to announce that Denny Lambert will become the head coach of the Soo Greyhounds," stated General Manager Dave Torrie. "After five seasons as an assistant coach, and an extensive playing background, including eight seasons in the NHL, Denny is well prepared to lead our team."

"In making this decision I weighed heavily the fact that Denny understands what our organization values, and definitely feel he is the right person," Torrie said.

"As an organization we want to develop our players both on and off the ice, thus making them more rounded as young men and preparing them to be successful as they move forward in life. Knowing Denny’s values and leadership skills, I know he will be a great leader for all the players,” he said.

As a former player with the Hounds, Lambert was a member of the team for three seasons and ended his junior career with the 1991 Emms Division, and Ontario Hockey League Championship squad.

“I am thrilled and excited to get this opportunity," Lambert said. "I would like to thank the Soo Greyhounds, Dr. Lukenda, Dave and the entire board for believing in me and giving me the chance to become the next head coach."

"I am looking forward to moving ahead and continuing the success and tradition that the Greyhounds have here in Sault Ste. Marie,” stated Lambert.

When asked about the expectations of this year’s team, the Wawa, Ontario product stated: “We are going to continue with the foundation that was laid down by Craig, myself and the other coaches. Much of the coaching philosophies will remain the same, although the method in which it is instilled in the players may change. Fans can continue to expect a disciplined team that is going to work and compete every single night.”

The Hounds newest bench boss then was not without words of thanks to the man he replaces, Craig Hartsburg.

“I cannot go without thanking Craig," Lambert said. "He played an enormous role in preparing me and guiding me for this next step in my coaching career. I had the privilege of learning from one of the best.”

On behalf of the Soo Greyhounds management, staff and players, we would like to congratulate Denny and look forward to working with him in his new position.