There is a clear difference in opinion about wind farms in Algoma. That difference was evident last night at Aweres Public School, the site of a public meeting regarding the proposed Bow Lake Wind Farm. 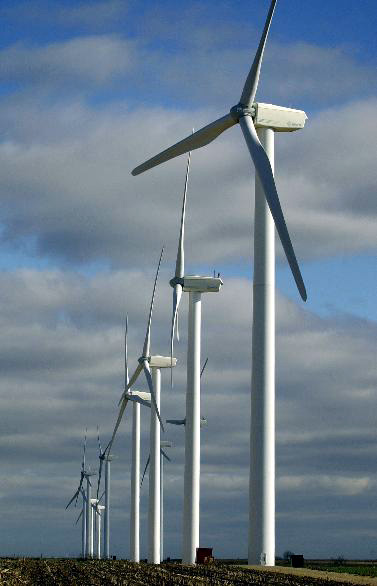 There is a clear difference in opinion about wind farms in Algoma.

That difference was evident last night at Aweres Public School, the site of a public meeting regarding the proposed Bow Lake Wind Farm.

Calgary-based BluEarth Renewables, with offices in Ontario, is seeking a Renewable Energy Approval (REA) from the Ontario government.

The project, if approved, would be completed by 2014.

BluEarth Renewables Vice President of Communications Kelly Matheson told SooToday.com, “the project is a really excellent example of a responsibly developed wind project that’s going to help Ontario meet its renewable energy goals that have been set in a very proactive and forward looking manner by the Ontario government.”

But Matheson says she knows there is a “mix” in opinion about the proposed development.

Within that mix is the group of area residents known as Save Ontario’s Algoma Region, better known as SOAR.

Gillan Richards of SOAR told SooToday.com, “it’s a concern because we found out two years ago people in Algoma simply did not know what was planned for the generation of wind energy in this area."

"We believe in our heritage coast, in preserving its natural state, without the intrusion of any industrial development.  Period. We want tourism to be the major industry in Algoma,” said Richards.

“We are not, as a group, against renewable energy, but we are concerned about the placement of this particular project," she said. " We are mostly concerned that people didn’t know, and its been our job to bring the information to the public as accurately as we can, to bring their concerns to BluEarth and the government of Ontario."

Matheson said BluEarth knows there is a lot of information, especially online, about the perceived effect of wind turbines on wildlife, also causing headaches and sleeplessness in people who live near wind farms, but stated that a lot of online research was unreliable and was encouraged that people were attending the public meeting and asking questions for themselves.

Project Development Lead Scott Hossie said, “we’ll be focusing on local employment. There will be 60 to 80 jobs in the construction period locally, and once operational, four to six permanent employees to operate the plant.”

Batchewana First Nation Chief Dean Sayers says the project is a winner for his people.

“We found through our own research that wind energy would have the least impact on the land. It’s going to have a minimal footprint on our land. We’ve embraced the opportunity to economically benefit from it," Sayers said.

"We have a strong commitment that a lot of our people will be able to fill those construction jobs, there will be training opportunities. There’s 26 kilometres of road involved, we have people being trained right now to be bulldozer operators, driving the equipment, showing people how to use a gravel crusher.”

“We know it will be profitable.”

Hossie said “we’re hoping to hold our second public meeting before the end of this year, then get our REA in early 2013, start construction summer 2013, and have both phases 1 and 2 of the project done by spring 2014.”

A second public meeting about the Bow Lake Wind Farm will be held before the end of this year. Details about the time and place of that meeting are not yet known.