Why we must save Algoma's family preservation program 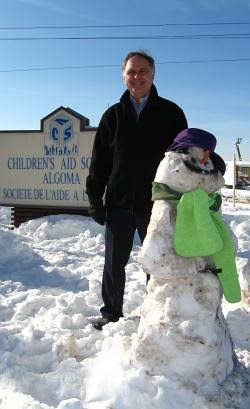 Joe can now enjoy long leisurely days with his daughter.

It wasn't always that way.

More than a year ago, the Sault man's confused four-year-old ended up in care with the Children's Aid Society of Algoma while her dad fought accusations that he had abused her.

For Joe and his daughter, the trouble started when someone told the CAS he had pulled the girl's hair.

There was no evidence to support that accusation.

Even after all charges against Joe were dropped, the CAS kept his daughter in foster care for another six months.

"She's home now," Joe tells SooToday.com. "I don't think it would have happened if not for the Children's Aid Society of Algoma's family preservation program."

Joe is very concerned, however, about the effect pending CAS job cuts will have on whether protection will be available to other families.

The Algoma CAS has been forced to lay off all six family preservation workers and their supervisor effective April 12, says CAS Executive Director Jim Baraniuk, shown in a SooToday.com file photo.

The society must cut its operating deficit by $1.1 million dollars to balance its budget by March 2012, says Baraniuk.

All this is happening at a time of growing concern that Ontario's child protection agencies may be excessively vulnerable to false, malicious allegations of abuse intended to deny custody and access to children.

He and others say the province must find a way to fund such programs.

And Joe goes further, saying the program should be spun off from the CAS and fully funded as an independent agency.

He uses his own story to illustrate why this is necessary.

"They said they had concerns," Joe tells SooToday.com. "They let me have supervised visits and a family preservation worker observed us."

One in particular became an advocate and a reassuring source of helpful information.

Joe says the need for family advocates is great, especially when dealing with agencies like the CAS.

Dawn is another Saultite who says she'd be worse off without the family preservation program.

As a child, Dawn ended up in foster care when the Algoma CAS removed her and her brother from their home, deeming their mother unfit to care for them.

There was no family preservation unit then.

Dawn says her family endured much hardship in those days.

Now, she's fighting for custody of her two-year-old son and she says a family preservation worker is helping her stay calm while she frets about the outcome of her case.

"These people are always there when you need them and they really go to bat for you," Dawn says.

Dawn is so passionate about the assistance she's getting that she's working with other families to organize a rally to save the local program.

The event will take place in front of the Sault courthouse and CAS downtown offices on Monday, March 29 from 1 to 2:30 p.m.

Family preservation programs began a decade ago in Sault Ste. Marie and fewer than a dozen other Ontario communities, when the province started funding more protection support programs, says Baraniuk.

Baraniuk says our community needed the program to help keep children at risk out of foster care, a system already taxed beyond its resources.

There's still a shortage of foster care families to host children who've been removed from their homes.

Baraniuk fears this shortage may be compounded by both the current economic times and the loss of the family preservation program.

"The economic downturn is putting a lot more stress on families," he says. "It's ironic the government decided to cut our funding for this program when we see the need for it rising."

Last June, the province cut funding to CAS Algoma by $1.8 million, citing a need to curtail spending and a hope that other community agencies would pick up the slack.

Baraniuk says that 40 of the 53 CASs in Ontario are operating with deficits, mainly because of the way the agencies are funded and spiralling costs of mandated services.

"On our controllable costs we're doing well," he says. "We are one of the cheapest in the region, in the province as well."

The costs that are rising fast and can't be controlled are related to services the CAS must access to carry out its child-protection mandate.

Those services are in the areas of legal, supervised access and group care where the children have to leave the community for treatment.

Until now, the family preservation program has reduced those costs, ensuring children didn't end up in care or were returned to their families sooner than would have been possible without the program.

"All of our community partners' resources are stressed," Baraniuk says. "For the province to believe they can fill the gap may be wishful thinking."

Until now, the family preservation program has worked closely with Algoma Family Services, Sault Area Hospital, Women in Crisis Algoma and other local agencies to intervene on behalf of families in crisis, ensuring families can stay together and stay healthy through whatever crisis they were facing.

"Currently in Ontario, there seems to be an assumption that the need for early intervention will be successfully addressed by an investment in very young children through initiatives such as early education," says Algoma Family Services Executive Director Lynn Ryan MacKenzie. "In fact, early intervention refers to the fact that families need quick and ready access to supports when problems first arise, not when things have reached the stage that child welfare intervention is necessary."

MacKenzie says the local CAS obviously understands that bringing children into care should be avoided if possible.

It has used flexibility in its funding arrangement to fill a gap in services in the community.

"The CAS in Algoma has historically provided prevention, early intervention and support services that ideally should have been provided by other community-based agencies so that families did not need to rely on the child welfare system," MacKenzie says. "However, provincial funding for these services has not been made available."

MacKenzie says it's short-sighted of the province to require CAS Algoma to cut back these services without making an offsetting investment allowing the community to fill the gap that will be left without the CAS family preservation program.

She says the need for robust prevention, early intervention and support services to families cannot be overstated. "The province, through the child welfare transformation process, has promised service providers that once spending in the child welfare system has been brought under control, reinvestments will be made into prevention, early intervention, support and treatment services," MacKenzie says. "With the announcement of significant cutbacks within the Algoma CAS, it is now time for the province to make good on that commitment and provide new, offsetting investments to enhance local service capacity in Algoma."

Baraniuk says the Algoma CAS must cut spending wherever it can in an effort to eliminate its $1.1 million deficit by March 2012.

He says the society doesn't see any other choices it could make at this time.