Apart from being officially known as “Naturally Gifted,” promoting itself as “The Alternative Energy Capital of North America,” and with bragging rights to many other things, Sault Ste. 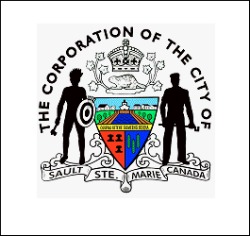 Apart from being officially known as “Naturally Gifted,” promoting itself as “The Alternative Energy Capital of North America,” and with bragging rights to many other things, Sault Ste. Marie should soon have an official municipal coat of arms to talk about.

The coat of arms, in contrast to the well-known municipal crest we are familiar with (pictured), will meet the standards of, and be officially recognized by, the Canadian Heraldic Authority.

The Canadian Heraldic Authority is a part of the Governor General of Canada’s Office.

The impetus for obtaining a coat of arms grew out of last year’s Celebrate 100! events.

White told us: “In 2012, because it was our anniversary year, the Heraldic Authority wrote to Mayor Debbie Amaroso and suggested it, and the Mayor asked us to review it.”

Council had discussed creation of a municipal coat of arms at least twice before (in 2003 and again in 2007) but enthusiasm frittered away.

Magnan is involved in the Committee because the crest worn on City Police Service uniforms will have to be altered, to include not only the new coat of arms, but also the Crown and the motto “Commitment, Excellence, Community.”

White informed Council at its May 27 2013 meeting that the Committee recommended several elements to be included in the coat of arms, which acknowledge Sault Ste. Marie’s culture, history, geography and wildlife.

Recommended as shield elements are the St. Marys River Rapids, the lock, depictions of whitefish and the fur trade, the steel and forestry industries, the Clergue Block House and Maple leaves.

The coat’s colours will be blue (water), grey (steel) and gold.

Coats of arms include animals (known in heraldic language as “supporters”), and in Sault Ste. Marie’s case, it is recommended two eastern or timber wolves be included, each depicted as holding a steelworker’s crucible.

All these recommendations were approved by Council at its July 15 meeting.

While an artist has yet to be chosen, both White and Forbes told us they anticipate it will be someone from “Sault Ste. Marie and area.”

As with any municipal project, the question of cost comes to mind.

White said: “One of the things we were concerned about was the cost of implementation, but we think over a period of about three years we will gradually replace the old crest with the new coat of arms.”

“Decals need to be replaced on City vehicles every so often anyway, and it’s easy to change letterhead on City documents.”

With the artist’s fee included, White said the City expects the coat of arms project to cost between $5,000 to $7,500.

White told us: “We don’t have any formal information on the existing city crest, but we believe it was adopted shortly after Sault Ste. Marie became a City in 1912.”

“We do have reference to it from a book written in the 1930s that was a compendium of different municipal coats of arms in Ontario.”

White said the City looked into officially registering the crest 12 years ago as “a housekeeping matter.”

The Canadian Heraldic Authority replied that because the crest did not meet its official requirements, it could not be officially accredited.

“We were also using the crown, but that it is something you can only use on a coat of arms with direct permission from the Queen, and even then the crown is used only in direct connection to the Queen or the armed forces.”