Wawa goose to be replaced, not repaired says town official

It's not going to Toronto, as previously reported by FedNor. It will be an entirely new goose
Dec 21, 2016 2:00 PM By: Kenneth Armstrong 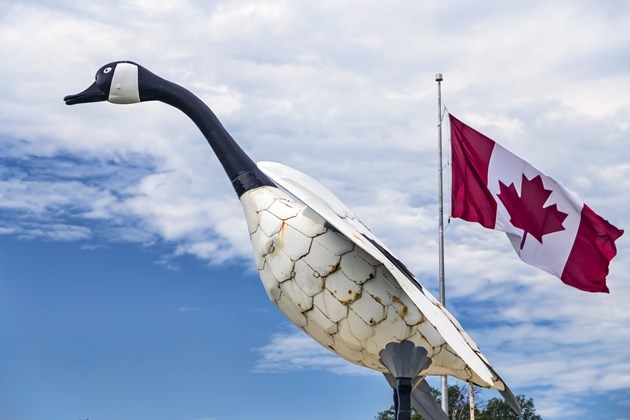 The chief administrative officer for the town of Wawa says the $100,000 of federal funds announced today will go toward building a new iconic goose statue, not to repair the existing one as stated in this morning's Government of Canada news release.

Chris Wray, CAO of Wawa, said this morning’s call from SooToday was the first he had heard about the $100,000 in funding being approved.

Wray said the funds, which the city applied for, were never planned to go toward dismantling and shipping to southern Ontario.

“I don’t know where they are getting that from, it’s not true,” said Wray.

The town did consider repairing the goose statue very early on in the process, said Wray, but decided some time ago to replace it instead.

“Part of the replacement is dismantling, but I don’t know where they get this shipping to Toronto part. That doesn’t make any sense,” said Wray.

The landmark, which currently stands next to Highway 101 near the junction with Highway 17, was unveiled in 1963.

The FedNor release, said Wray, got that part wrong as well, saying the statue has stood since 1960 when the last link of the Trans-Canada Highway was unveiled.

“That’s not true. If they had checked their history, they would find the last link connecting the Trans-Canada Highway opened in Wawa, but the goose was not to commemorate that. The goose was thought up by a local businessman named Al Turcott who came up with the idea because Highway 17 bypassed the community of Wawa — it didn’t go through it. His idea was to attract people off the highway to come in and see Wawa,” said Wray.

The current goose replaced a previous plaster sculpture, which lasted only a few years before needing replacement.

That specific bird was chosen for the landmark because Wawa comes from the Ojibwe word for goose.

Wray said the funding is appreciated and the FedNor release was correct in saying the statue is integral to the community’s brand.

“People know Wawa because of that and it is certainly part of our brand,” said Wray.

A call for comment from FedNor was not immediately returned.